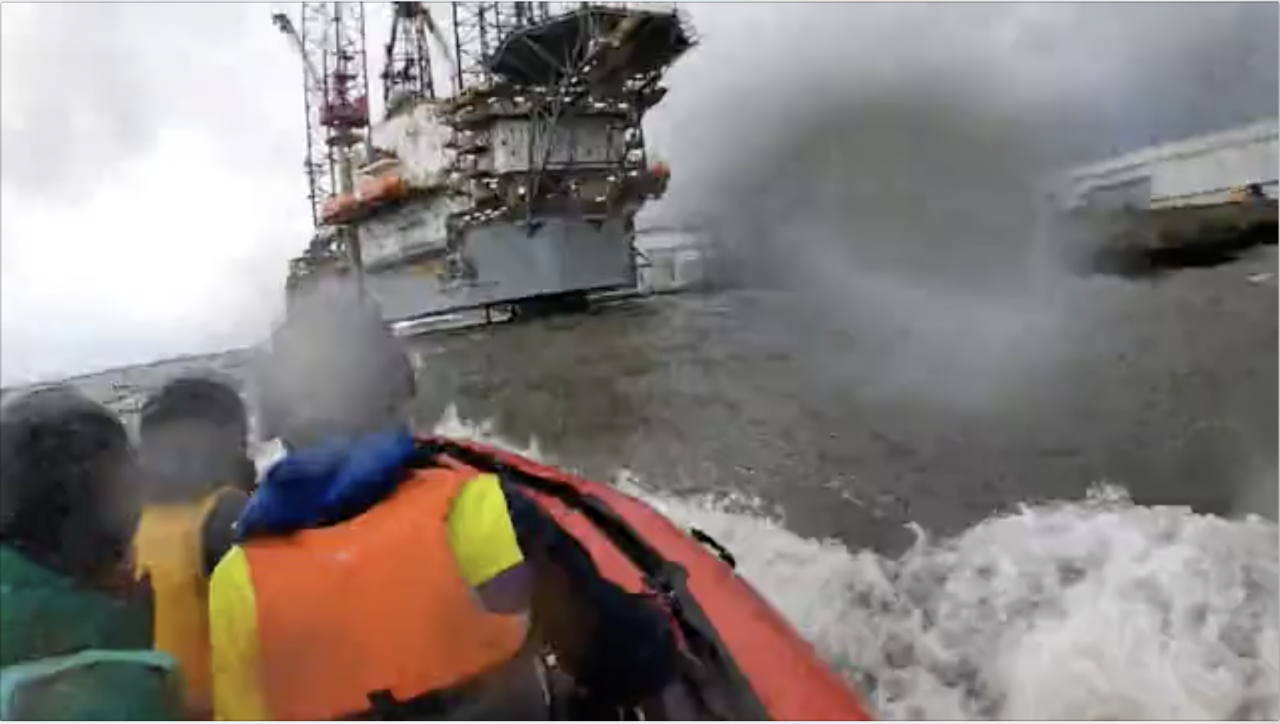 ACTIVISTS from the environmental protest group Extinction Rebellion Scotland have been arrested after occupying a Shell gas rig in Dundee Harbour, with the aim of preventing its transport to the North Sea for extraction operations.

The activists climbed aboard Valarsis’s Ensco 122 – currently berthed at Princess Alexandra Wharf at the Port of Dundee, and scheduled to begin a nine month Shell contract this month – from the River Tay this morning, whereupon they scaled the towers and declared their intention to remain as long as possible. According to a statement from Extinction Rebellion Scotland, they had “assessed the risks and are properly prepared.”

However, five hours into the occupation, deteriorating weather conditions forced the activists climb down and they were arrested. Three other activists, who had attempted to board another leg of the rig earlier in the day, were also arrested.

The self-identified “rig rebels” demanded that the Scottish and UK Governments “tell the truth” about the impact of the fossil fuel industry and the scale of its responsibility for the ongoing climate and ecological crisis; take action to decommission fossil fuel infrastructure and implement a ‘just transition’ led by workers and frontline communities; and establish a legally binding citizens’ assembly that puts “decision making processes into the hands of the people.”

One of the activists participating in the action, identified by Extinction Rebellion Scotland as Jo, a 34-year-old gardener from Edinburgh, commented: “I am doing this for my niece Ivy, who is an incredible little human. I don’t want to say to her that I didn’t take a stand when I had the choice and left it to other people to sort it out. I am going to give it my best shot and go down fighting, because I can see the world through her eyes and I want to protect things for her.”

Dundee-based Extinction Rebellion activist Alison added: “Shell is not an asset to our economy. They avoided paying corporate income tax in the UK in 2018 despite generating pretax profits of $731 million. They pay their CEO 143 times what the average worker receives. And they receive massive amounts of money in subsidies from the UK and Scottish Government. Worldwide, the fossil fuel industry receives five trillion dollars of subsidies a year. That’s $10 million a minute, according to the International Monetary Fund.”

Extinction Rebellion Scotland have stated that the occupation will be followed by a series of “solidarity actions” planned for the next ten days, following heightening international concern over climate change in the wake of Australia’s devastating bushfire crisis.

Prior to the activists’ arrest, a spokesperson for the industry body Oil and Gas UK condemned the occupation, saying: “This is a dangerous and short-sighted stunt which does absolutely nothing to help provide the solutions which will be required to meaningfully deliver net zero emissions by 2045 in Scotland.

“This stunt puts both the activists and offshore workforce at risk and our industry – with its focus on safe operations – will not condone these actions.”

Following the occupation’s end, an Extinction Rebellion Scotland spokesperson commented: “When we boarded the rig this morning, Oil & Gas UK, who certainly have a lot to lose from a transition away from fossil fuels, said we lacked foresight. Unlike them, we knew when it was sensible to stop. What is really lacking in foresight and dangerous is continuing to drill, extract, burn and explore for ever more fossil fuels, putting us above dangerous levels of global heating.

“Australia burns, millions are displaced by flooding and whole ecosystems are collapsing. This is just the beginning of climate breakdown at 1.1C warming – what will we be facing in 30 years time at potentially 2, 3 or even 4 degrees warming? Oil & Gas UK, the government body whose ‘statutory principle is to maximise the economic recovery of the UK’s oil and gas resources’, need to own up to its role in the climate crisis and face the fact that our future must be fossil free.”