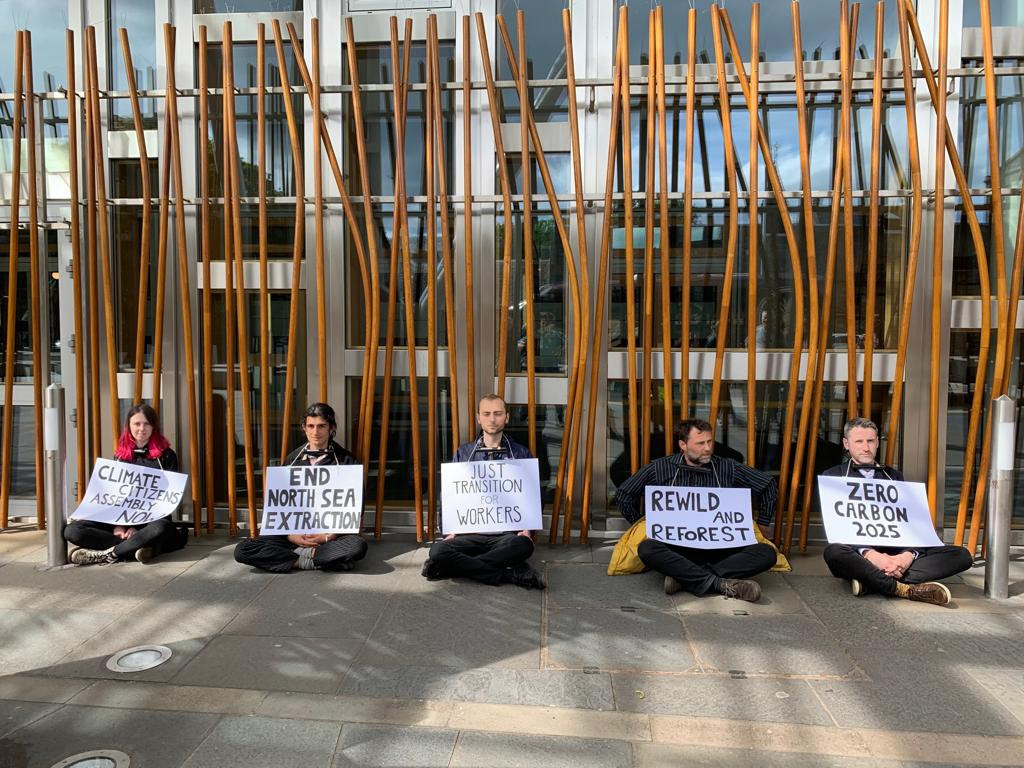 The five activists were unlocked by keys delivered to each of the party leaders, along with a note calling for greater ambition in fighting climate change

ACTIVISTS with Extinction Rebellion Scotland have met with representatives of Scotland’s five main political parties after locking themselves by the neck to the front of the Scottish Parliament and delivering the keys to each of the party leaders.

The activists locked themselves to the front of the Holyrood building earlier today [4 July] as part of a protest demanding that the upcoming Scottish Climate Bill addresses the current “ecological emergency.” The keys needed to release them were sent to the five party leaders, along with a note calling for greater ambition in tackling climate change.

Extinction Rebellion have confirmed on social media that all five activists have now been released after speaking with representatives of the Holyrood parties, who were dispatched with their respective keys.

“It’s not about what’s feasible under the current system of business-as-usual: it’s about what’s necessary to deal with this existential threat to humanity.” Extinction Rebellion Scotland letter to Scottish party leaders

The letter sent to the party leaders stated that the Climate Bill’s target of net-zero greenhouse gas emissions by 2045 is “nowhere near ambitious enough to minimize the risk of catastrophic climate change of 2°C or more. It doesn’t do enough to mitigate the rapidly unfolding climate and ecological crises.

“According to the IPCC, the whole world – including many countries whose historical emissions and  capacity to respond to the crisis are far less than those of Scotland – needs to make radical cuts in emissions by 2030 in order to stand even a chance of keeping global warming to 1.5°C. In order to do this, we believe that Scotland needs to show real leadership by establishing a much more ambitious target of net zero emissions by 2025.

“It’s not about what’s feasible under the current system of business-as-usual: it’s about what’s necessary to deal with this existential threat to humanity. A target of 2045 is tantamount to accepting ecocide.”

A similar action took place in Leipzig, Germany over the weekend, when five activists with Extinction Rebellion Youth chained themselves to Leipzig’s Neues Rathaus, with keys delivered to the offices of the five major German parties.

One of the Holyrood activists, 21-year-old student Eleanor Harris, commented: “Right now is the most critical point in the climate movement in Scotland. It’s vital we get our message heard loud and clear by policy makers while the Scottish Climate Bill is being considered.

“We need them to understand that the changes possible while upholding the growth economy are going to drive millions to extinction, and in order to protect the future of our ecosystem and the human race, far more radical changes are essential. We’re running out of time and options to get MSPs to listen, which is why I locked on today.”

The Greens have found their key and unlocked one of the @ScotlandXr activists! A triumph for Holyrood’s internal mail system at the very least pic.twitter.com/ep6aZyXISV

Another of the activists, campaigner John Hardy, added: “I’m locking myself to parliament because the politicians are stuck in a business as usual mindset which will destroy the living world, including us all. They shouldn’t have their hands tied by business interests who want growth and profit at all costs. A target of 2045 is ecocide and I can’t sit back and let them sign away our future.”

Scottish Green co-convener Patrick Harvie MSP was the first to unlock one of the Extinction Rebellion activists, who also spoke to Green MSP Ross Greer. He was followed by Scottish Liberal Democratic leader Willie Rennie, Scottish Conservative MSP Maurice Golden – who stated that the Scottish Tories are taking an “evidence-based approach” to climate change – and Scottish Labour leader Richard Leonard. Last to appear was Secretary for Environment, Climate Change and Land Reform, Roseanna Cunningham. All five activists were unlocked by mid-afternoon.

Today’s protest comes ahead of a further planned action by Extinction Rebellion, which plans to stage a non-violent protest camp outside of the Scottish Parliament between 16 and 20 June.

The ‘Holyrood Rebel Camp’ will demand MSPs amend the Climate Bill to target net zero carbon emissions by 2025 and create a Climate Citizens’ Assembly to oversee policy changes. Open invitations will be extended to politicians, trade unions, NGOs and other groups. Extinction Rebellion Scotland have also warned they will engage in other acts of civil disobedience to apply greater pressure to the Scottish Government and parliament.

Commenting, the writer and activist Myke Hall stated: “Scotland’s environmental politics are not bold or progressive. The Parliament’s pension fund is invested in fossil fuel companies. They are financially supporting ecocidal multinationals, instead of investing ethically in the Scottish economy. This disgraceful hypocrisy can’t be allowed to continue!”

READ MORE: Escalation: Where next for the climate action movement?

While the 2045 target currently included in the Climate Bill is expected to be set in line with the recommendations of the recommendations of the recent Committee on Climate Change (CCC) report, Extinction Rebellion Scotland claim that the CCC “have hidden the scale and urgency of the cuts needed today by assuming enormous volumes of carbon will be removed from the atmosphere in future by unproven technological fixes.”

According to a statement from Extinction Rebellion Scotland, “This allows for politically palatable conclusions which see continued exploration of North Sea oil and gas, continued airport expansion and incremental changes to business as usual. This still puts us on course for truly catastrophic warming. The Scottish Government have declared a climate emergency in word only, but are still kicking the can down the road.”

Meanwhile, the new Finnish Government has pledged to be carbon neutral by 2035 and announced a new public investment programme of £1.1 billion per year on green energy infrastructure.

Pekka Haavisto, the Green League party chair, said the plan was “probably the most ambitious in the world”.