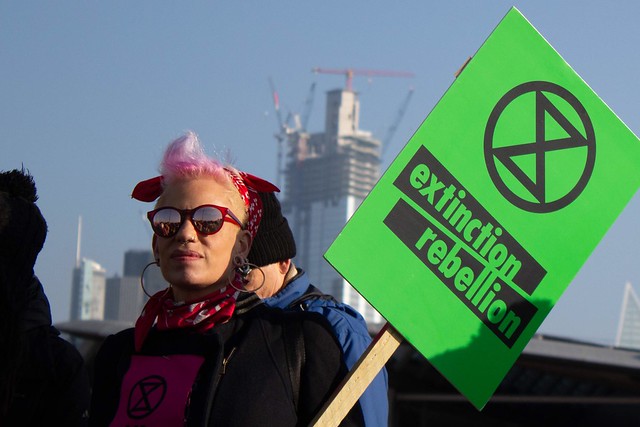 While the festival this week announced it would cut ties with fossil fuel companies Exxon and Total, the energy supplier – which uses coal in its fuel mix – remains a headline sponsor

THE climate change campaign organisation Extinction Rebellion has called on the Edinburgh International Science Festival to cut ties with EDF Energy, one of its chief sponsors, due to the use of coal in the fuel mix of its power stations.

This follows this week’s release of a new sponsorship policy by Edinburgh Science, the charity behind the Edinburgh Science Festival, which confirmed that it will now avoid accepting funds from “fossil fuel companies and their primary trade bodies,” effectively ending its prior financial relationship with organisations and companies such as Exxon, Total and the Scottish Oil Group.

While welcoming the announcement, Extinction Rebellion Scotland highlighted on Twitter that the festival continues to be sponsored by EDF Energy, which they argued contravenes the festival’s own policy.

However, a spokesperson for Edinburgh Science told CommonSpace that the charity defines a fossil fuel company as “one whose main business activity is the extraction of fossil fuels,” which would theoretically exclude a power supplier such as EDF that only uses fossil fuels including coal in their power stations.

Speaking to CommonSpace, Extinction Rebellion Scotland Glasgow activist Anna Fisk commented: “The Science Festival still has a long way to go in boycotting companies who profit from fossil fuels. EDF Energy, the headline sponsors of the festival, continue to use coal in their fuel mix – coal makes up 7.55 per cent of EDF Energy’s fuel mix. The Science Fest have committed to boycotting companies with any “involvement” in coal. We hope the Science Fest will face this issue head on and drop EDF as headline sponsor.

“We ask that this move from the Science Festival encourages other Scottish cultural institutions follow suit – particularly the National Museum of Scotland who have not publicly reviewed their ethics policy post our disruptive action during the Scottish Oil Club dinner at the museum. It is no longer acceptable to legitimise these climate criminals by accepting their support of our national institutions.”

A spokesperson for Edinburgh Science emphasised their initial statement on the matter to CommonSpace, which states: “We routinely review our sponsorship policy and have recently decided that we will no longer seek sponsorship from fossil fuel companies.

“We hope the Science Fest will face this issue head on and drop EDF as headline sponsor.” Extinction Rebellion Scotland activist Anna Fisk

“We are extremely grateful to the fossil fuel companies we have had productive relationships with over the last three decades and especially for their essential support for our schools touring programme Generation Science. Their generosity has enabled us to work with tens of thousands more children across Scotland than we could have done without their support, many of these in rural parts of the country. They have been good partners whose commitment to the organisation has been to enable us to encourage more young people in to science and technology.

“With the issues of climate change ever present and urgent, we feel increasingly compromised by the conflict between accepting sponsorship from fossil fuel companies and programming events that scrutinise the main causes of climate change.”

In addition to their prior statement, Edinburgh Science offered the following elaboration to CommonSpace: “We will no longer accept financial support from fossil fuel companies and their primary trade bodies. We define a fossil fuel company as one whose main business activity is the extraction of fossil fuels.”