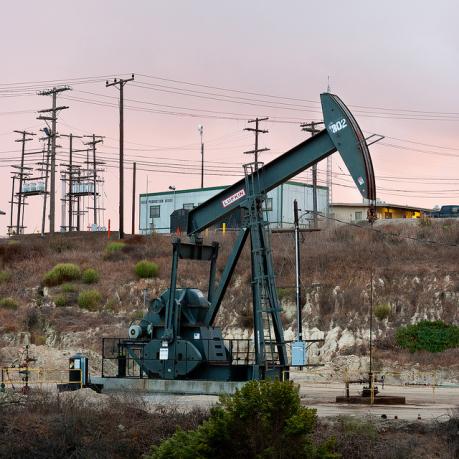 Climate activists from Extinction Rebellion are currently staging an occupation at the Department for Business, Energy and Industrial Strategy

AS the newly formed direct action environmental campaign Extinction Rebellion stages its inaugural meeting in Scotland, dozens of its activists have occupied the interior and entrance of the UK Government’s Department for Business, Energy and Industrial Strategy to protest the “havoc” being wrought by fracking.

The protest, which reportedly also includes activists from the campaign group Christian Climate Action, began this morning [12 November] with protestors supergluing themselves by the hand to the card entry gates within the Westminster building’s staff.

Shortly after police attempted to remove the occupiers, two activists engaged in non-violent protest graffiti, spraying painting the extinction symbol and the words “frack off” on the entrance’s exterior.

“Frack off” #extinctionrebellion protester spray paints department for business energy and industrial strategy as they escalate the #ClimateBreakdown demonstration pic.twitter.com/K2FsFDNXPU

Today’s protest came in response to the promotion of fracking by the UK Government and specifically by BEIS, which Labour revealed earlier this year has met with fracking companies over 30 times over the past three years, while refusing to meet with any anti-fracking campaign groups, despite mounting opposition to the controversial practice across the UK.

Following revelations of the fracking meetings – which involved Ineos, Cuadrilla and UK Onshore Oil and Gas – then-policing minister Brandon Lewis met with fracking firm Cardrilla in March of this year, as protests were mounting over the company’s planned Preston New Road drilling site in Lancashire. In September, three activists protesting at the site were jailed, though their sentences were later overturned on appeal.

READ MORE: Analysis: Why climate activists have to take politics as seriously as science to win

Climate activists have been at odds with the UK Government over fracking since then-Chancellor of the Exchequer George Osborne announced in 2013 that the fracking industry would enjoy substantial tax breaks in order to encourage shale gas production, which would increase the UK’s carbon emissions.

Becky Daniels, a protestor from the Preston New Road fracking protest site in Lancashire, commented: “The time to take action against climate injustice is now. The political system is failing us from local councils to central government. Democracy no longer exists, as seen with England’s ‘dash for gas’ and the systematic criminalization of peaceful protest.”

Daniels added: “If we do not act now, we face extinction. At the very least we will witness the breakdown of society as we know it. The days of nimbyism are over. The impacts of climate injustice will be felt around the world. We are imploring you to stand with us in solidarity and declare a climate emergency.”

Extinction Rebellion demands that the UK Government immediately declares “a climate and ecological emergency” and commits to reducing greenhouse gas emissions to zero by 2025, as well as creating a citizen’s assembly to oversee these measures.

“The political system is failing us from local councils to central government. Democracy no longer exists, as seen with England’s ‘dash for gas’ and the systematic criminalization of peaceful protest.” Climate activist Becky Daniels

Explaining the pressing need for action, Extinction Rebellion has cited both the scientific research on the dangers of fracking to water and air quality, as well as the fact that since fracking began at Preston New Road two weeks ago, more than 30 earthquakes have occurred in Lancashire.

Today’s protest was the first in what Extinction Rebellion intends to be a week-long series of protest actions leading up to an “act of mass civil disobedience” in Parliament Square on 17 November, dubbed “Rebellion Day”.

Explaining their rationale, the Extinction Rebellion website explains the gathering as being spurred by “our government’s abject failure to protect citizens and the next generations from unimaginable suffering brought about by climate breakdown and social collapse”.

In October last year, the Scottish Parliament voted overwhelmingly in favour of a fracking ban, following the Scottish Government’s announcement  that it would formalise and solidify its moratorium on the practice.

Extinction Rebellion’s first Scottish meeting will also take place today in Glasgow. Other actions planned in the lead-up to Rebellion Day include an LGBTQI party to disrupt the Brazilian Embassy in the wake of Jair Bolsonaro’s election.

The IPCC report last month found that to stop global temperatures rising 1.5C above pre-industrial levels, global carbon emissions had to be reduced by 45 per cent by 2030 and over 90 per cent by 2040. Anything above 1.5 degrees, the UN international grouping of climate scientists found, would lead to devastating effects on the planet including a significant increase in water shortages, droughts and floods.