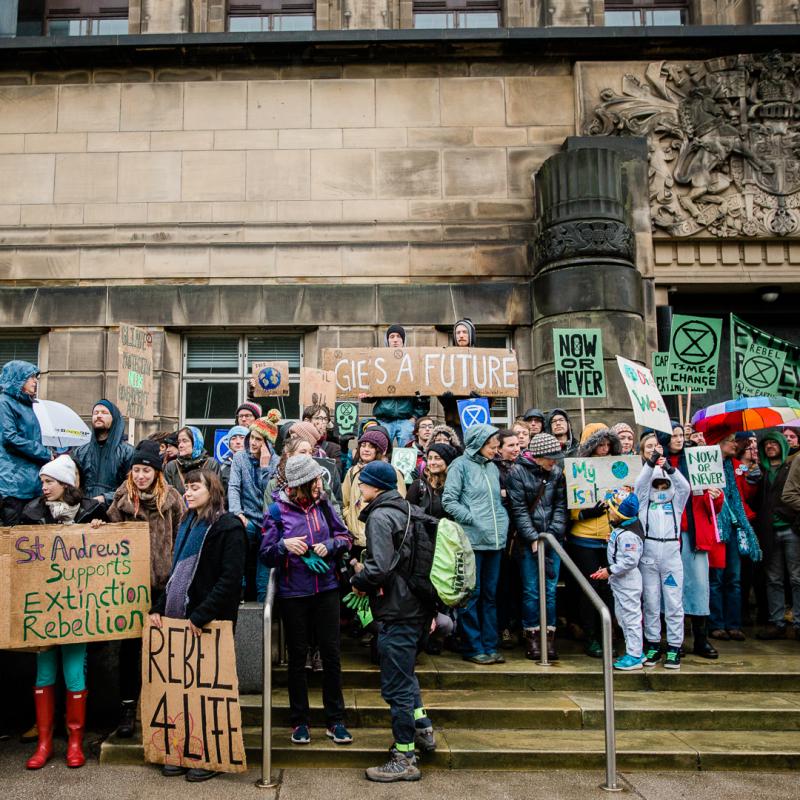 EXTINCTION REBELLION SCOTLAND will participate in a planned ‘International Rebellion’ next week with a new ‘Festival of Climate Reality’ and a mass-disruption in Scotland’s capital.

While the festival will provide political education on climate change and offer workshops of nonviolent direct action, the following day’s action hopes to bring traffic in Edinburgh’s city centre to a halt via a ‘critical mass’ bike ride.

On 15 April, the Festival of Climate Reality will take place at the University of Edinburgh’s David Hume Tower, offering talks, workshops and training for activists and anyone else concerned about the mounting effects of climate change.

While a full program will be provided by this weekend, the festival is expected to include a talk on “the true extent of the climate crisis and ecological collapse”, to which representatives of political parties, business and broadcasters have been invited, a workshop on nonviolent direct action to prepare for the disruption of central Edinburgh, and an ‘Art Zone’ intended to empower individuals of all ages in collective creative resistance.

Sustainable events and communication manager Lykke Harris commented: “As an avid lover of the Natural World, I believe in telling the truth about the crisis that our environment and species is facing. Our festival of climate reality will not only act as a platform for information sharing but as a space to talk about the possible solutions, including a citizens assembly.”

Environmental social researcher Scott Herrett added: “I work in sustainability science and witness daily how life on this planet is unraveling before my eyes, I also see our present political system is impotent in acting in the face of this global crisis. So all that’s left for me to do is rebel to demand our governments start acting appropriately.”

On 16 April, Extinction Rebellion Scotland will block off North Bridge in the centre of Edinburgh between 3pm and 7pm. The road block will be preceded by a ‘critical mass’ bike ride, which will see a block of cyclists cover the road wearing signs, flags, and bright colours, with the intention of slowing the traffic before it is stopped altogether.

In the reclaimed street, activists plan to engage in a street party and a ceilidh. Extinction Rebellion Scotland have invited speakers, musicians, poets and artists to participate, but promise that everyone is welcome to speak.

Extinction Rebellion Scotland activist Mim Black commented: “We are causing disruption by blocking roads because business as usual is killing us all. We must act now and take part in mass participation direct action, as hundreds of successful campaigns have done before, and force the people in power to see that we will not stand by and let the world burn.”

“We are causing disruption by blocking roads because business as usual is killing us all.” Extinction Rebellion Scotland activist Mim Black

Edinburgh resident John Hardy also said: “I would rather not have to cause disruption, but desperate times call for desperate measures. The lack of urgency from the governments of Scotland and the UK in reacting to the climate emergency leaves me with no choice. We do not have the time to wait for the politicians to wake up to the climate crisis, never mind catch up with what needs to be done to fix it. That is why I am taking action.

“Climate breakdown is a global emergency and requires a global response, which is why we are staging an international rebellion. Hundreds of thousands of people in dozens of countries across the world are joining together to issue a wake-up call to governments and their fellow citizens.

“We have to radically change how our economy functions and remove the reliance on fossil fuels. Business as usual is no longer possible. That is why we are causing economic disruption, in order to force the government to listen. We hope our fellow citizens will understand the need for action and support us.”

On 17 April, Extinction Rebellion Scotland will be travelling down to London to join the International Rebellion, which will begin across the world on 15 April. Over multiple days, protestors in cities from Mexico City to Vancouver plan to demand immediate, radical action from their governments on the global climate and ecological emergency.