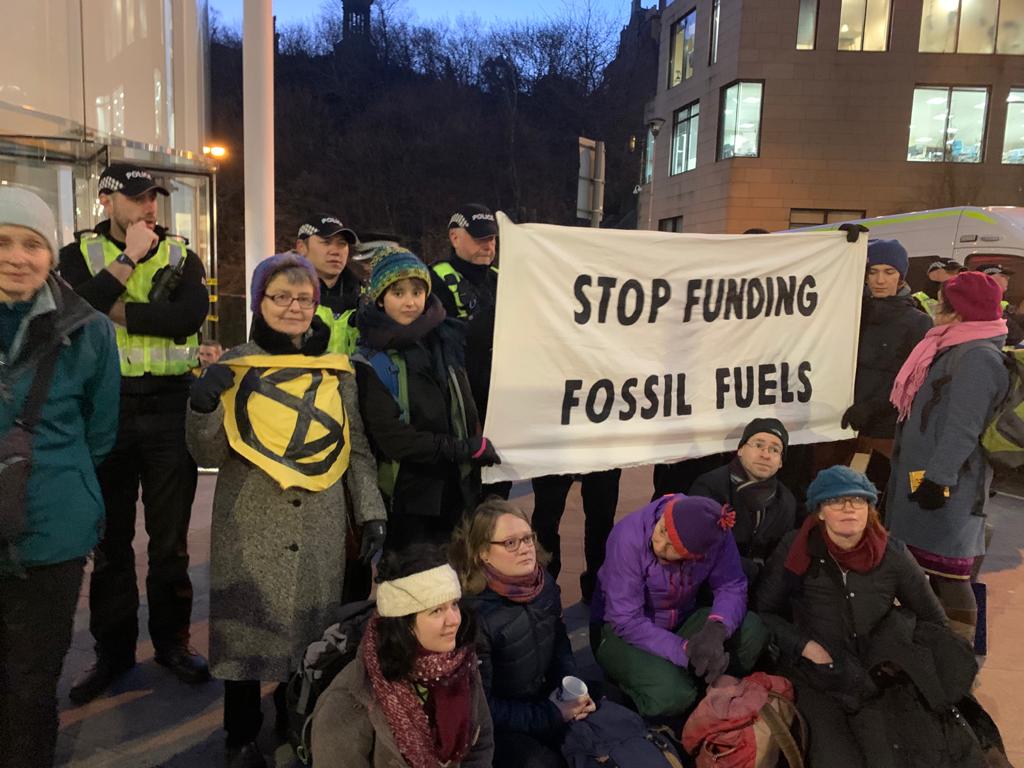 OFFICES OF THE INVESTMENT FIRM responsible for MSP’s pension fund have been barricaded by Extinction Rebellion activists over links to the fossil fuel industry.

Extinction Rebellion Scotland activists launched their protest outside the Edinburgh office of Baillie Gifford on Tuesday morning [14 January] at 7:30am.

The environmentalist action group say they have targeted the investment firm, who manage Holyrood’s pension fund, after they increased investment in the Shell despite the “climate and ecological crisis driven by fossil fuels”.

A heavy police presence was also reported at the scene.

The group say the action is part of their Rig Rebellion 2.0 campaign, a two-week-long campaign by Extinction Rebellion Scotland activists targeting the fossil fuel industry and the institutions which “prop it up”, with demands including a Just Transition led by a legally binding citizens’ assembly.

An investigation by The Ferret found that Baillie Gifford had increased their investment in the oil and gas company Shell from £360,000 to £430,000.

The five MSP trustees who oversee the pension have asked for a review into how investments could be made more ethically.

Extinction Rebellion Scotland campaigns officer John Hardy said: “Pensions are supposed to be about the future, but there will be no future if we keep investing in fossil fuels.

“Our representatives and those who work on their behalf need to show leadership on the Climate Emergency by removing all support for the fossil industry which threatens us all.

“I have been campaigning for divestment of parliamentary pension funds for a number of years and I know that our politicians recognise the need to tackle climate breakdown, but we can’t wait any longer for them to take action. They need to divest now.”

Commenting on the action, Scottish Green co-leader Patrick Harvie MSP said: “It’s important to lead by example, which is why MSPs of all colours have been calling for an end to unethical investments of our pension funds.

“During a climate emergency, any investment in our future must recognise that unlimited extraction of fossil fuels is simply incompatible with the available science on global warming. We’ve seen that universities are beginning to recognise this. It’s time for investment firms and other financial institutions to catch up.”

Marco, 24 from Edinburgh also commented: “Destroying ecosystems is profitable. Burning fossil fuels is profitable. Financial institutions like Baillie Gifford have been very effective at convincing the public that ‘there is no alternative’, that our economies cannot function without these industries and that continued investment in them is therefore legitimate.

“The truth is that these industries are the single biggest threat to life on Earth, and a small number of people are getting incredibly wealthy propping them up and speculating on the future of our planet.”

Baillie Gifford did not respond to a request for comment by the time of publication.

UPDATE: A Scottish Parliament spokesperson told CommonSpace: “The trustees are currently reviewing the investment strategy with a view to introducing a greater emphasis on long-term sustainability.

“The Trustees will provide an update on their next steps once they are in a position to do so.”