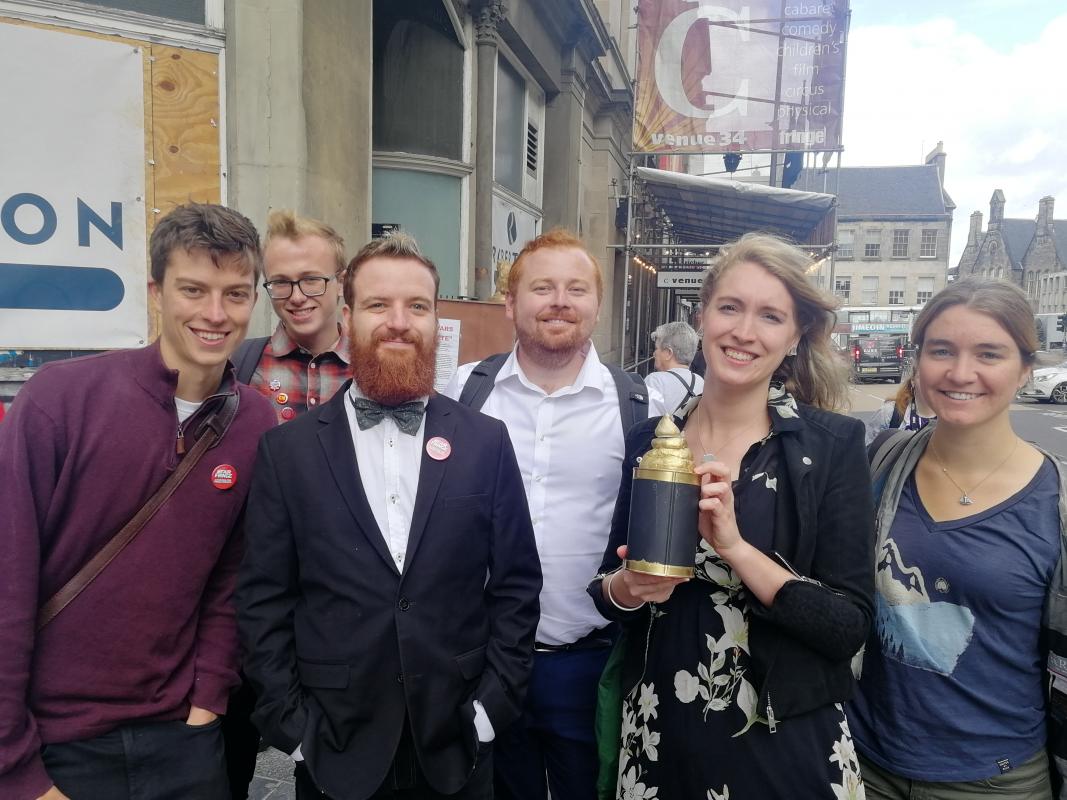 The awards include categories which aim to reflect the most pressing issues facing workers at Edinburgh’s festival scene, such as poor pay, unreasonable rotas, and unpleasant working environments.

Nominations for the awards were taken by Fringe workers in person and via an online form, and were put up for an online public vote.

The Poor Pay Award went to C venues, which according to several C venues staff members classes its staff as ‘volunteers’ and pays them only £200 plus accommodation for working over the festival period. C venues has also faced claims that the accommodation it provides is overcrowded, with several people sharing single rooms, sleeping on mattresses on the floor.

The Fair Fringe campaign also alleges that C venues have under-recruited this year, so staff are doing more hours for the same pay, with one worker calculating their rate at less than 60p per hour.

C venues received a second dubious honour in the form of the Horrible Work Environment Award, following details reported in CommonSpace from an anonymous source working for the Fringe venue.

The source told CommonSpace that staff are given “strict instructions” not to let anyone – including those performing at C venues – know how badly its ‘volunteers’ are paid, and that managers have been disciplined for trying to prevent overwork and unreasonable overtime.

“You have to know your working practices are pretty terrible to have correctly guessed you would win Bad Boss Awards!” Fair Fringe campaign spokesperson

The Rubbish Rotas Award goes to Just the Tonic, which according to the awards’ initial nomination, told staff during their job interviews that they would receive one day off every week. Contrary to this assurance, subsequent reports have indicated that every member of the team only gets one day off – 13 August – during the entire festival period, which stretches over several weeks. As a result, “staff are very tired out,” according to the Fair Fringe campaign.

Speaking to CommonSpace, a spokesperson for the Fair Fringe campaign said: “We hadn’t yet announced the winners of our awards but when we arrived at C venues they had security waiting. You have to know your working practices are pretty terrible to have correctly guessed you would win Bad Boss Awards!

“As reflected in their winning of two awards, we’ve had more complaints about C venues than anywhere else. With atrocious pay, exhausting hours, no breaks, bullying of staff and unfit accommodation we need to see nothing short of a full overhaul of how C venues run their Fringe operation.”

“If festival bosses don’t want to win these awards, they should commit to implementing the measures outlined in the Fair Fringe Charter.” Fair Fringe campaigner Christine Chesterman

Logan Vaughn, who presented the awards, added: “C Venues and Just the Tonic might not havebeen very willing to receive our awards today, but it’s important that the way they treat their workers is brought to public recognition. Today the Bad Boss Awards put the stories of festival workers centre stage. We hope that C Venues and Just the Tonic improve their working conditions so they don’t win again next year.”

Fair Fringe campaigner Christine Chesterman also commented: “The Fair Fringe campaign has uncovered shocking treatment of workers at venues across Edinburgh. The Bad Boss Awards may be the least coveted awards of the festival, but they help shine a light on the exploitation of workers taking place in many parts of the Edinburgh Festival.

“If festival bosses don’t want to win these awards, they should commit to implementing the measures outlined in the Fair Fringe Charter.”

The Fair Fringe charter requires that festival workers are paid the real Living Wage of £8.75 per hour and are given regular rest breaks, as well as an anti-sexual harassment policy, an end to unpaid trial shifts, equal pay for young workers, minimum hour contracts, 100 per of tips going to staff, consultation on rotas, paid transport after 12am and trade union recognition,