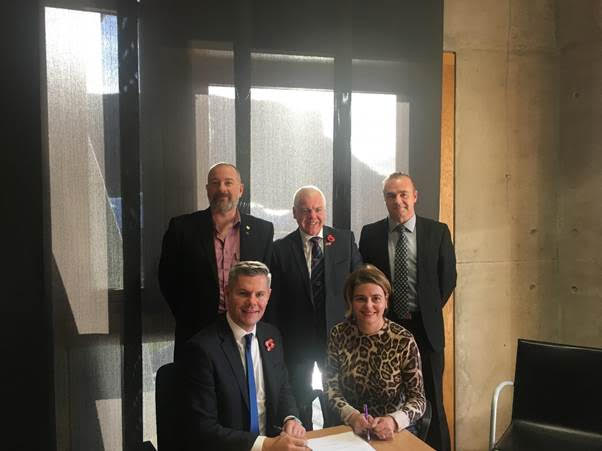 Fair Work agenda will include a respect for trade union rights under attack for UK Government.

A NEW agreement between trade unionists and the Scottish Government will solidify a Fair Work agenda, including union rights under attack from the UK Government.

The agreement on 8 November between union officials and Scottish Finance Minister Derek MacKay, just announced by the PCS civil service union also sets out commitments to fairness on working hours, minimum pay standards and apprenticeships, and will apply across civil service bodies operating under the Scottish Government.

PCS National Officer Lynn Henderson said: “This is a landmark moment for workers across the Scottish Government, who already know what ‘fair work’ looks like. Fair work lies in the power of collective bargaining, the chance for fulfilment and development in your job, the need for manageable workloads, the guarantee of job security and the ability to join a trade union easily and freely.

“These principles are enshrined in our Fair Work agreement that has been signed today and these principles will now be enforced by the tens of thousands of union members in the Scottish Government public and civil service.

“We look forward to other public body employers coming forward to add their name to the list of organisations who know that if Scotland is to be a fair work nation, then fair work must begin here.”

Measures in the new Fair Work agreement include a guaranteed living wage for employees, an agreement that agency workers will not be used to undermine industrial action, respect for the right of unions to engage in legal industrial action, the development of ‘modern apprenticeships’, a clampdown on excessive hours and a commitment to flexible work.

Trade unions have faced huge attacks from the UK Government in recent years, including anti union legislation which enforces minimum thresholds for engaging in strike action.

Thought the fair work agreement cannot override the trade union laws, they form part of a package of measures introduced by the UK Government in opposition to the moves at Westminster.

Speaking after signing the agreement with union officials, Mackay said: “Fair work is good for everyone. It drives innovation and productivity. And that makes for better businesses.

“We need to lead by example, and that is why, building on the commitment announced by the First Minister to put fair work first by applying fair work criteria to as many funding streams, business support grants and public contracts as we can, this Fair Work Agreement demonstrates our commitment to be a fair work employer.

“It sets out a range of principles agreed between Scottish Ministers and the recognised Civil Service Trade Unions that means civil service employers will continue to embed fair work into employment practices.”

There has been friction between the Scottish Government and some unions in recent years, most recently with the EIS teachers union, which is demanding an austerity-busting pay increase of 10 per cent.