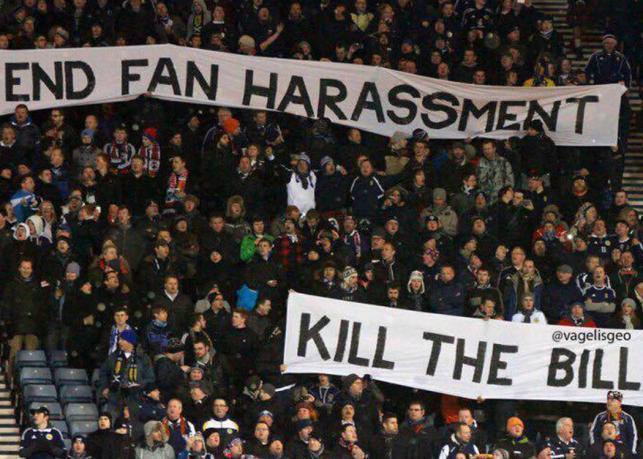 In an interview with CommonSpace, campaign group Fans Against Criminalisation said some MSPs “chose to play the man and not the ball” in Thursday’s debate

AFTER A LONG-RUNNING CAMPAIGN Fans Against Criminalisation [FAC] were in Holyrood yesterday as the parliament supported a bill to repeal the controversial Offensive Behaviour at Football legislation, but in an interview with Commonspace they have criticised some of those speaking in the debate for apparent “smears.”

Opposition parties were united in supporting the Repeal Bill yesterday, as only SNP MSPs spoke against the repeal.

Reflecting on the debate, FAC’s Jeanette Findlay said Mairi Gougeon and Fulton MacGregor were amongst some of the SNP speakers who gave more considered speeches against the bill: “Essentially [the MSPs supporting the bill] gave very detailed reasons about why they were opposed to the act, but the majority of SNP MSPs lined up behind an argument that it would send out the wrong message.

“But some, to their credit, didn’t do that, and Mairi Gougeon and Fulton MacGregor spoke a little bit about the detail.

“Both of them came to the conclusion that the legislation should be amended rather than repealed, which we thought was ironic because the government has known the problems with the legislation for some time but hasn’t amended it before now, even during their review in 2015.

“Even those SNP MSPs who acknowledged the flaws of the bill didn’t specifically say what they were looking amend.”

Findlay told Commonspace that apart from a meeting during the 2015 review of the legislation they haven’t been able to meet with government: “Had they wanted to engage with us at any point we would have bitten their hand off. We were banging on the door, desperate to be given an opportunity to say why we thought this was poor legislation.”

The debate became more heated during a speech from the SNP MSP James Dornan, who was critical of the FAC group but also gave personal experiences of sectarianism which he has experienced. Dornan said in the debate that the OBFA did not target football fans, only those who broke the law: “In most civilised societies, what happens is that we try to change the behaviours of those who break the law.

“Here, it seems to be the case that, if there is a well-organised, influential, apparently well-funded group of people who can wield some political clout, they can get a compliant politician to fight to change the law on their behalf.”

Jeanette Findlay told Commonspace that the organisation was not “well-funded” and that its only major expense was some campaigning activity and helping fans who have been unfairly affected by the OBFA.

MSPs supporting the repeal of the OBFA reminded the chamber that they were as committed to tackling sectarianism as the government, but favoured the use of pre-OBFA legislation and an increased emphasis on anti-sectarianism education.

“James Dornan has completely misjudged the tone of this entire debate. He is continually making very personal attacks and quite far-fetched allegations about dedicated campaigners and politicians from other parties.” James Kelly MSP

In evidence to an earlier Justice Committee hearing on the report, the Law Society of Scotland supported this and said: “We are of the view that the common-law crime of breach of the peace, section 38 and a number of statutory aggravations are in place and continue to be, and that offensive behaviour at football matches could be dealt with under pre-2012 legislation.”

Speaking to Commonspace after the debate, James Kelly responded to Dornan’s comments:  “James Dornan has completely misjudged the tone of this entire debate. He is continually making very personal attacks and quite far-fetched allegations about dedicated campaigners and politicians from other parties.

“Tackling sectarianism is an issue I take incredibly seriously, and I know that it is something which James Dornan also cares about on a personal level.

“Groups such as FAC have played a crucial role in showing that for the vast majority of fans, football is something we love and that should not be looked down on by ministers. The campaigners have been articulate critics of the legislation, sharing examples of lives disrupted by this discredited law.”

“Some MSPs chose to play the man and not the ball, and some of the remarks came across as politicians from the governing party attacking an organised group of ordinary people who have decided to challenge the government on this flawed legislation.” Jeanette Findlay

Jeanette Findlay said that although FAC was pleased with the outcome, overall they had been disappointed with the tone of some of the debate: “Some MSPs chose to play the man and not the ball, and James Dornan’s comments about FAC were incorrect.

“Some of the remarks come across as a politician from the governing party criticising an organised group of ordinary people who have decided to challenge the government on this flawed legislation.

“I hope someone in his own party or the parliament takes an opportunity to remind him that it is not the job of an MSP to smear and attack ordinary people.

“Some MSPs chose to play the man and not the ball, and some of the remarks come across as politicians from the governing party attacking an organised group of ordinary people who have decided to challenge the government on this flawed legislation. That attitude in parliament is worrying for democracy.”

Commonspace put FAC’s concerns about his comments in the debate to James Dornan and he said: “FAC are perfectly entitled to campaign as they have done, and even though I don’t agree with their aim I accept they won the vote yesterday.

“Yesterdays debate showed that, far from being undemocratic, we could all have an opinion and vote democratically.” James Dornan MSP

“Sectarianism is still a problem in Scotland that we must tackle, and the examples I gave in my speech were clearly not directed at FAC.

“This is a ludicrous accusation. If anything yesterdays debate showed that, far from being undemocratic, we could all have an opinion and vote democratically.”