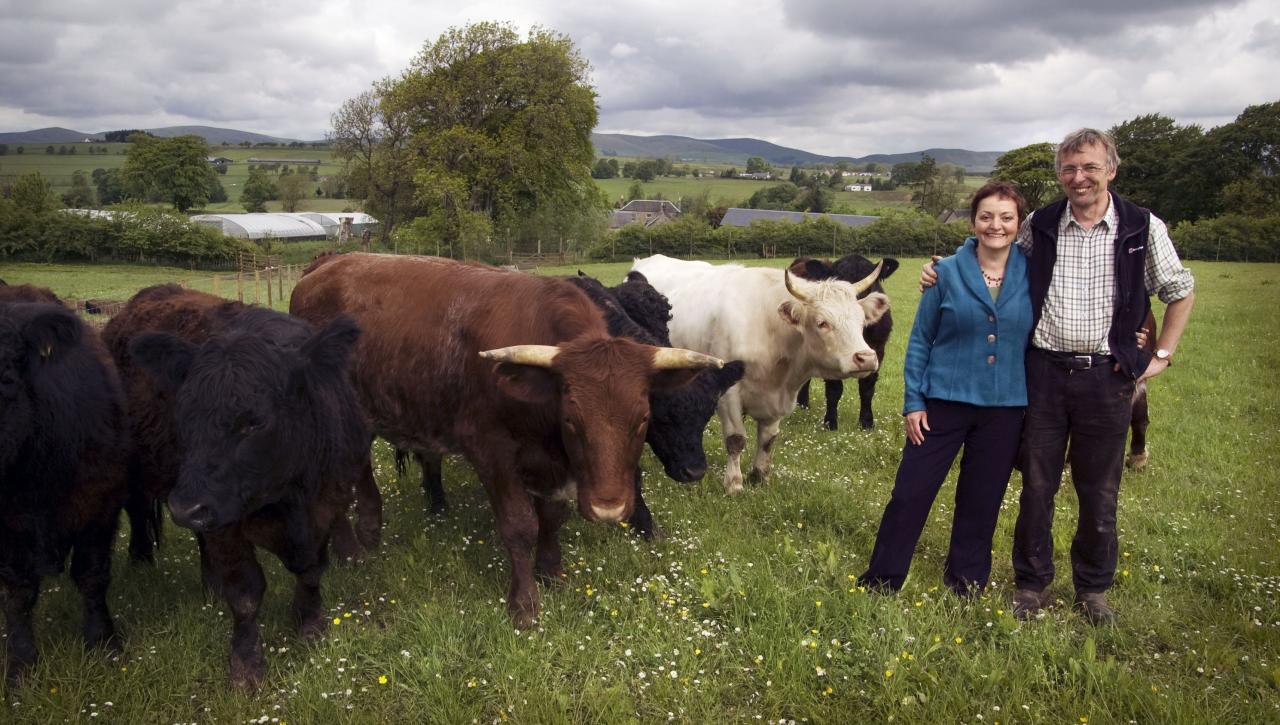 As the referendum on Britain’s membership of the EU approaches, CommonSpace speaks to Scottish farmers on either side of the debate

EU referendum polls have so far shown farmers swinging towards Leave, and Andrew Stoddart is among them.

The farmer made the news last year when his battle to stay on his farm at Coulston Mains in East Lothian gained the support of tens of thousands of people. Despite the public battle, he and his young family were forced to leave the property in January 2016.

An outspoken critic of Scotland's concentrated pattern of land ownership, Stoddart's main gripe with the EU is that the Common Agricultural Policy (CAP) is only fuelling the situation.

CAP has long been controversial. A vital subsidy for the struggling farming sector, or a massive protection racket: whichever way you view it, the scale of the subsidy is extraordinary. A whole 39 per cent of the EU's budget is currently allocated to farming; around £47bn.

“The [CAP] area payment is a massive incentive for landlords to take land away from tenants.”

Scottish farmers receive around £451m in direct CAP subsidies every year. Though the CAP overall is slowly decreasing in size, this annual figure is guaranteed until 2020.

But in 2013, £3.2m of this went to one individual: Frank Smart, who is thought to own nearly 100,000 acres. The Queen, if she so wished, could claim half a million a year for owning Balmoral estate (probably wisely, she does not). And this is Stoddart's issue: the old families and offshore trusts which own vast tracts of Scotland are raking it in, while, he argues, smaller farmers are suffering a decline.

Recent attempts to reform the system, he says, "have made things worse. Under the Single Farm Payment (SFP) regime, the landlord could not put the tenant [farmer] out and then claim the subsidy. Under this new regime, they can. The subsidy regime works in Europe because they dont have a feudal situation like we do.

"The area payment is a massive incentive for landlords to take land away from tenants." 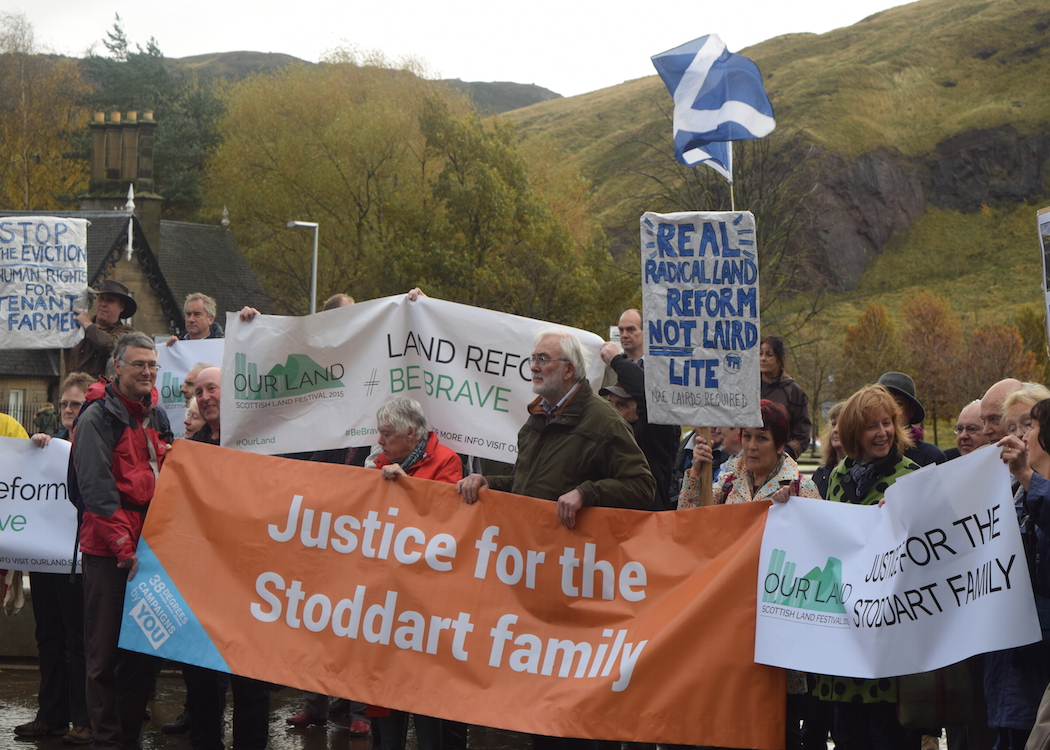 It's this, he argues, that's largely to blame for the rise of contract farming. The owner claims the farming subsidy, whilst contracting out the actual work. Those getting their hands dirty operate with little security, while the owner "sits in his slippers all day".

"It's a race to the bottom, fuelled by CAP, and this rise in contract farming has had a devastating effect on communities", Stoddart continues. "There's nobody employed, nobody lives on the farm anymore. If you go past Colstoun Mains [his former farm], it's like a ghost town. Everything's lying empty."

Recent attempts to reform the system were, in his view, a losing situation for tenant farmers,  but a boon for landed power. "The lobbying these people do is incredible. Landed interests spent fortunes pushing for the system to be changed: away from SFP and in favour of this new regime, which suits their interests. It should be declared; I don't know if it would be any more transparent in the context of Brexit, but at the moment the EU is really not helping."

Nor, he thinks, has Scotland's own legal system helped; a Land Court ruling in 2010 decreed that tenants who do receive their farming subsidy must pay part of it to the landlord.

"If you'd asked a lot of farmers last year if they wanted in or out, they'd say in," Stoddart concludes. "But after this year, with the payment fiasco, such a shambles, people want out. They want to get away from the computer and back to farming."

30 miles away, just south of the Pentland Hills, is Whitmuir Farm, where Heather Anderson [pictured above] has a very different take on the referendum.

Running the organic farm with partner Pete Ritchie for the past 15 years, Anderson was a keen campaigner for Scottish independence – and now is fighting for an EU 'remain' vote.

There is no contradiction in this, she says: "I'm in favour [of the EU] because I'm Scottish and European. When I voted Yes, I was imagining Scotland as a small independent country in Europe – a member state of a bigger group with shared values."

Originally from Dundee, Anderson stood for the SNP on the South Scotland list in May's election, and spoke at the SNP's massive 2015 conference on the subject of food poverty.

"If we vote to leave, the rural economies will collapse."

There are problems with the EU, Anderson readily admits. But the benefits in terms of environment, climate change and workers' rights outweigh the downfalls.

And like many, it's not necessarily just the perceived benefits of the EU that are influencing Anderson's vote, but the threat of strengthened rightwing rule at Westminster.

"The British government resisted every regulation on pesticides, water cleanliness, environmental regulations," Anderson says. "It could all be overturned if we vote to leave. I saw Owen Paterson [secretary of state for environment, food and rural affairs] speak at a farming event recently; he said we should ‘ditch the precautionary principle as witchcraft and superstition’. So every endeavour to stop messing up the planet, he views as 'witchcraft'.

"At least it's an honest statement – they want to liberalise, exploit the environment, and the only thing standing between us and environmental harm is the EU." Anderson and Ritchie run Whitmuir on principles of agroecology and their produce is organic – still not a very common phenomenon in Scottish farming, and Anderson, a proponent of affordable and sustainable local food, enjoys the sense that they are "part of a European movement of agroecological farmers".

"If we're at all serious about growing food in Scotland, for Scottish people, we need to be in Europe because they support endeavours around the rural economy and redesigning the food system. The alternative is a neoliberal market where we just can't compete – we'll just end up importing more.

"You'd have to be stitched up the back to think farming would be better off out of Europe," Anderson states bluntly. "All this stuff about 'Oh we'll just give the money to farmers directly' – they probably won't be able to do that. The World Trade Organisation prohibits direct subsidy; you are simply not allowed to subsidise the cost of production. But the EU, because of its 500 million customers, negotiated an exemption for agriculture. Leaving the single market will remove our right to subsidise agriculture.

"Scottish agriculture needs support in a way that English farming just doesn't, and the idea that Westminster politicians are going to set aside cash, take money away from the NHS and schools, to give it to farmers – it's not going to happen."

In one of the many echoes of the independence referendum heard at the moment – albeit reversed – Anderson says that Scotland massively benefits from the EU, getting £20 back for every pound spent. "It's wealth redistribution. They don't give all the money to London – they spread it out."

Like Stoddart, Anderson has been a vocal supporter of land reform. The concentrated land ownership which characterises Scotland would, she feels, only worsen in a Brexit situation. "The enemy is the laird, and for that we need land reform. But if we vote to leave, the rural economies will collapse. You'll have more hunting, less farms."

The CAP system, she admits, has "major distortions and anomalies – many of which we have been campaigning to reform". These reforms would be in line with the "big shift" necessary in European policy: "Towards giving public support to public good – not just handing out money, but placing conditions on what farmers should be doing with it."

It's the big question in this debate – reform from within, or leave altogether? Certainly Anderson is uneqivocal on what she hopes will happen on 23 June – and frustrated with farmers who are leaning towards Leave.

"You're talking about removing the baseline of environmental protection. No direct subsidy. And losing the biggest trading partner. How does that help?" 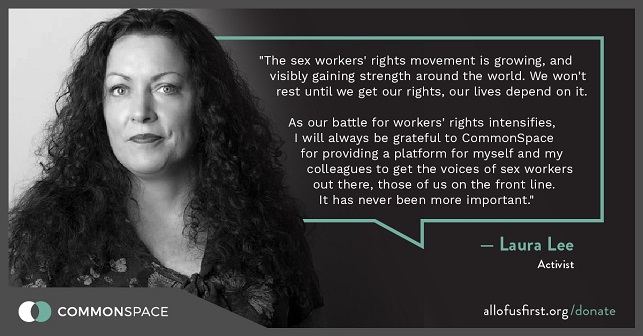