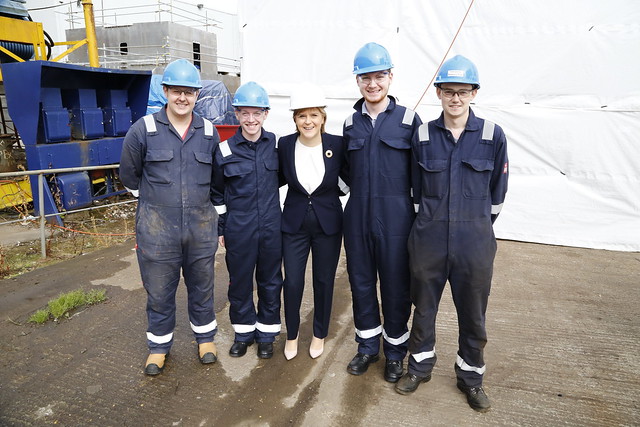 THE Scottish Government has nationalised Ferguson Marine, on the day the Clyde shipyard company entered administration.

The 300 workers’ jobs will be protected and work on two Calmac (CMAL) ferries will now continue.

First Minister Nicola Sturgeon tweeted on Friday [16 August]: “Ferguson shipyard is now under public control. Despite best efforts, this proved to be the only option for the Scottish Government to prevent job losses and ensure that ferries for the Clyde and Hebrides service can be completed.”

The Scottish Government’s statement said that it will “at all times remain open to discussions with any parties interested in securing a viable commercial future for the yard”, with a four week process for commercial bidders to come forward.

“The Scottish Government will acquire FMEL at the end of that process should no viable commercial offer be forthcoming during that period,” the statement read.

Work on the two contracted CMAL ferries will continue during this period, with a revised cost analysis one of the first tasks for the new government management team.

Finance Secretary Derek Mackay, who met workers at the Ferguson Yard on Friday, stated: “We have always been clear that we want to complete the vessels, secure jobs and give the yard a future. I am here today to ensure that we hit the ground running in making that happen and to reassure Ferguson’s excellent staff of the government’s commitment.

“Public control will provide much-needed continuity of employment now and ensure the completion of the CMAL ferry contracts at the lowest possible cost to the taxpayer. It is absolutely essential that the outstanding contracts to build these two ferries are completed in order to sustain the Clyde and Hebrides Ferry Services network and provide vital support for the economies of our island communities.

“The alternative was for the government to stand aside while the company went into administration, resulting in the jobs being lost and the vessels not being completed. That was not an outcome I was willing to consider.

“We are now working to put in place a management team which will refocus all efforts on completing this vital government contract. We will also be working closely with staff and the trades unions – as well as suppliers and customers – to achieve the best possible outcome for the yard.”

READ MORE: ‘This doesn’t need to be the case’: Calls for nationalisation as historic Glasgow rail depot closes

The nationalisation appears to be a defeat for former Ferguson Marine owner and reputed billionaire Jim McColl, who in the Mail on Sunday last week lambasted the Scottish Government’s nationalisation plan, saying it made “no economic sense” and indicating he would be willing to take the government to court over it.

McColl’s alternative plan to save Ferguson, which included increased government support in return for an equity stake, was rejected by the Scottish Government. Mackay said it would have been “illegal” under EU state aid rules.

McColl had taken over the company in 2015 when it was facing administration, supported by two government loans worth £90 million combined. Those loans made the Scottish Government primary creditor to the company, and thus had first option on taking over once it entered administration.

McColl said the initial projected costs for the production of the two ferries had more than doubled, with the construction process also well behind schedule.

GMB Scotland Organiser Gary Cook welcomed the Scottish Government’s decision to nationalise, stating: “Nationalisation secures the immediate future of the yard and that is a very welcome development, particularly after all the recent uncertainty.

“Our members were caught in the middle of a situation that had nothing to do with them and their relief will be palpable. It is five years since the yard went bust and the Scottish Government has prevented that from happening again.

“We can now look to the future and everyone should do so with a sense of purpose. With vision and competency we can get on with building the ships Scotland needs and together we can grow jobs and prosperity on the lower Clyde.”

Unite Scottish Secretary, Pat Rafferty, also backed the move, stating: “Unite fully supports the actions of the Scottish Government to intervene and nationalise Ferguson Marine shipyards. It’s clear at this stage that nationalisation was the only serious option on the table to save the yard and more than 350 highly skilled jobs. The Scottish Government have rightly acknowledged their obligations to the workforce, and the people the ferries would serve which must be acknowledged.

“Unite also welcomes the fact that the trade unions have been fully engaged in this process so far. This must remain the case going forward to ensure that the ferries on the existing contract become operable and future contracts can be secured. The yard can have a very successful future and we must all now play our part to make sure this happens.”