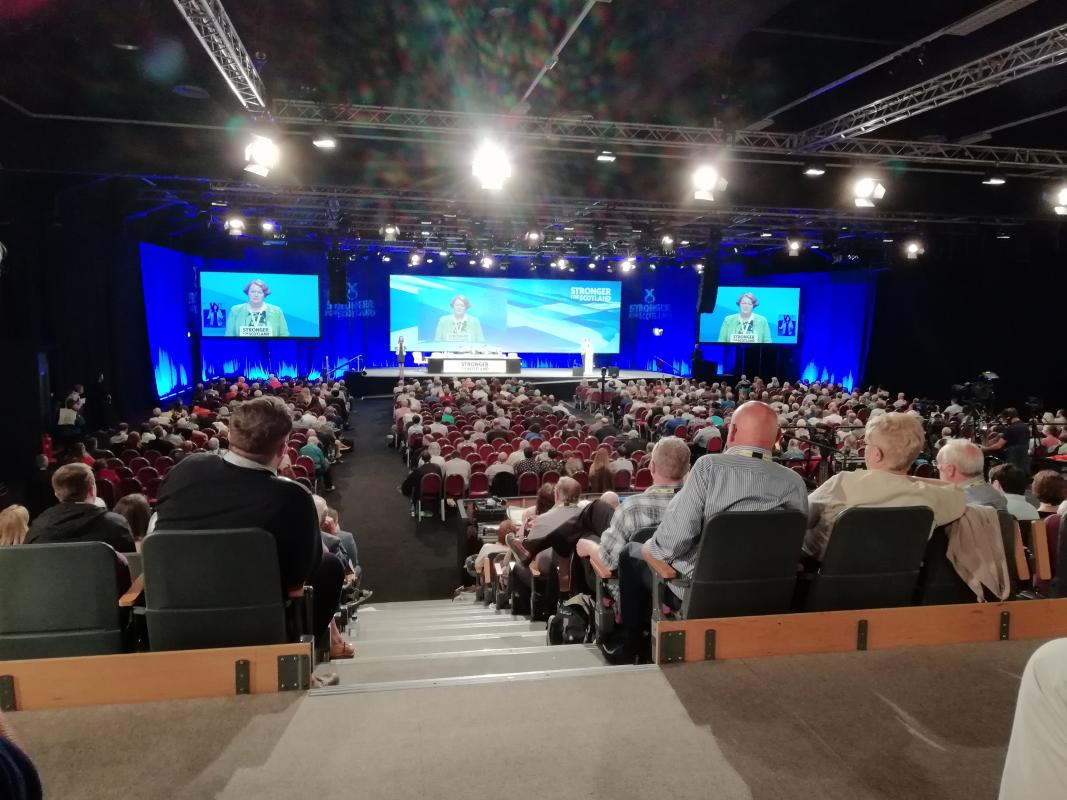 SNP CONFERENCE backed a motion on opposing the massacre of Palestinians in Gaza by Israeli military forces in recent months, in what turned into a fiery debate between the majority of delegates and John Mason MSP.

The motion called on the conference to condemn Israel’s attack, which has killed over 120 people since protests began in Gaza on 30 March, oppose “Israeli settlements on occupied Palestinian land”, support the implementation of UN resolutions and “lead international efforts to end the siege of Gaza”.

Phillipa Whitford MP, who has worked as a doctor in Gaza previously, spoke in favour of the resolution stating that Israel’s actions in Gaza were “utterly indefensible”.

Whitford explained how Gaza had been “under blockade for 11 years” with no proper sewage and water system, with over 40 per cent of women being denied access to emergency healthcare including breast cancer treatment.

Tommy Sheppard, Edinburgh East MP, began his speech by referring to the Nakba 70 years ago, where “Palestinians were made refugees in their own land”, stating in Gaza they now live in what is “effectively an open air prison”.

He described the UK Government’s failure to condemn Israel’s latest “slaughter of innocents” as “deplorable”, and refuted the Israeli state’s narrative of the killings as necessary actions to thwart terrorists, saying:

“All the video and photo evidence suggests they were not ‘under invasion from terrorists’ – the Israeli’s were shooting children from over 300 metres away.”

Sheppard went further, saying if anything Israel’s actions “were driving Palestinians into the hands of terrorists.”

The Edinburgh MP received a standing ovation when he called on UK arms sales to Israel, which were worth £320m from 2014-17, should end until there is evidence that arms are not being used by the Israelis in their siege of Gaza.

“We need to know if these guns and bullets ended up in the backs of Palestinian children. Until we are confident that is not happening we should suspend arms sales to the Israeli Government.”

John Mason, MSP for Glasgow Shettleston, was vociferously booed by the hall when he spoke against the resolution, arguing that criticism of Israel was linked to anti-semitism.

Mason began by stating that Israel felt threatened by “richer countries in the region”, including Iran, despite the fact Israel is a significantly wealthier country than the Persian state.

Mason then went on to criticise the part of the resolution which referred to UN resolutions, arguing that “UN resolutions tend to be anti-Israel” and that the UN was “not the gold standard on the issue”.

Whitford responded to Mason by saying she would defend her right to criticise Israel, and called on the Scottish Government to back the establishment of a Palestinian state.

“Conference condemns the excessive use of force by Israel on Palestinian citizens during Palestinian ‘Land Day’ earlier this year when over 1400 were injured and several killed. Conference opposes all use of violence in the region and believes the citizens of both Israel and Palestine should be able to live in safety and security.

“Conference notes with deep concern the ongoing siege in Gaza where over 2 million citizens live without their fundamental rights to clean water, health, work and mobility; recognises the escalating humanitarian crisis; and upholds the right to hold peaceful protests without fear of persecution.

“Conference calls on the UK Government to condemn actions that are illegal under international law, including Israeli settlements on occupied Palestinian land, to take an active role in implementing UN resolutions on the region and to lead international efforts to end the siege on Gaza.”

Other motions passed in the afternoon session included one on women in the justice system, which “urges the Scottish Government to research the court mentor systems used in countries such as Sweden, with the aim of adopting a similar system in Scottish criminal courts to improve people’s experience of the system, and ultimately reduce reoffending.”