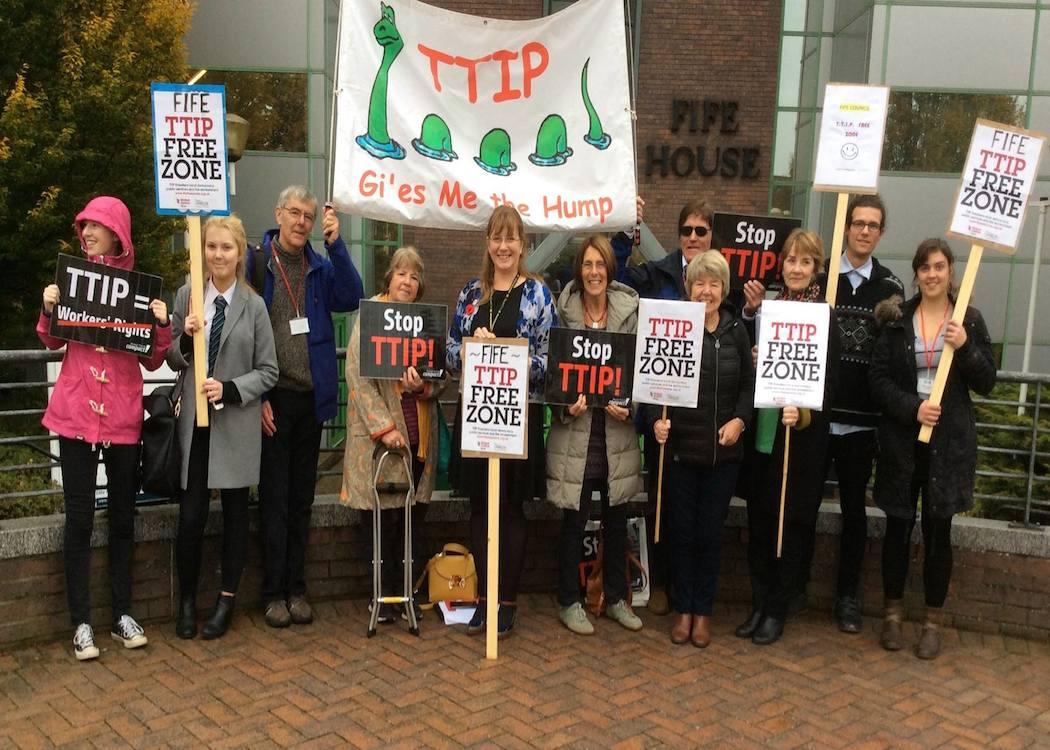 GRASSROOTS OPPOSITION to the EU-US corporate pact known as ‘TTIP’ is growing across Scotland with Fife council becoming the fourth to declare itself a “TTIP free zone”.

The motion – brought to the council following an active community campaign – was endorsed by both the SNP and Labour in a move that signals growing discontent against the power grab driven by American and European corporations .

The Transatlantic Trade and Investment Partnership has faced opposition concerning its secret negotiations between big business, with leaked documents suggesting any deal will erode environmental, labour and food standards.

Secret corporate courts – enshrined by a practice known as the investor-state dispute settlement (ISDS) – would risk opening the door to further NHS privatisation as corporate giants can then sue governments for not tending out public services into the private market under the guise of ensuring ‘competition’.

The motion presented to Fife council by councillor Karen Marjoram was opposed to TTIP’s secretive and undemocratic framework, the details of which have not been released despite opposition from over 3 million European citizens.

The motion was then strengthened by a Labour amendment, which supported a complete rejection of ISDS corporate courts.

Jean Kemp, an activist with St Andrews TTIP action group, was exctatic about the news: “Fife council has voted to reject TTIP in its entirety! Thank you Councillor Marjoram for proposing the motion. You did us proud.

“Councillor Marjoram’s motion was a good one and in line with SNP policy, but Councillor Judy Hamilton (Labour) tabled an amendment which strengthened the motion to a degree even we most optimistic TTIPers had not expected – no ISDS, not even ISDS-lite. Outright opposition to TTIP.

Councillor Karen Marjoram, who brought forward the proposal, told Kingdom FM : “Transatlantic Trade and Investment Partnership negotiations are secretive and undemocratic, all available information on this deal comes from leaked documents, and from Freedom of Information requests.

“If this assault on democracy was not enough, it’s the covert nature of these talks that causes me concern.”

Following dedicated campaigning by community groups and Global Justice Now, all SNP MPs have signed up to oppose ISDS and the regulatory framework of TTIP. Campaigners at the party’s conference called for the party to completely oppose the deal . Activists recently travelled to London to make this case to Scottish MPs .

Picture courtesy of Scotland against TTIP