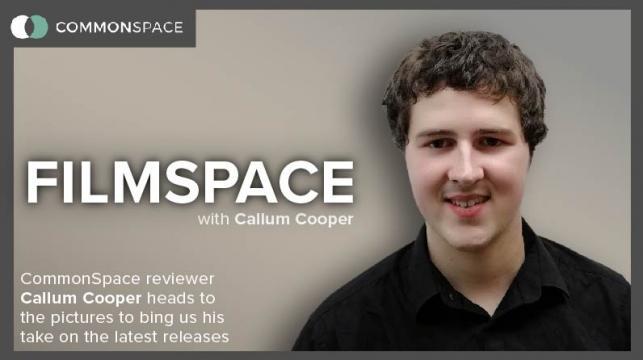 Film critic Calum Cooper reviews the week’s newest films, including a raunchy but good-natured comedy, a redundant attempt at a family film, and the final film in the Has Fallen trilogy. 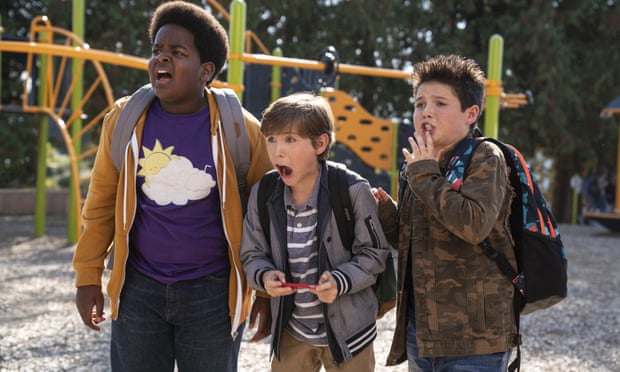 Good Boys was much funnier and much more wholesome than I thought it was going to be. Even though its premise is about as raunchy as can be, it is youthful innocence that wins the day and allows the story to flow as smoothly as it does. It may be Superbad with tweens, but it has both charm and humour to spare.

Jacob Tremblay has already proven himself one of the decade’s rising talents with Wonder and Room (which I still think he should’ve been Oscar-nominated for). He plays Max, a 12-year-old who has begun scratching the surface of the adult world. He and his best friends, Thor and Lucas (Brady Noon and Keith L. Williams respectively), have become morbidly curious about the world of sex, as so many adolescent boys inevitably are. Max is invited to a kissing party that his crush Brixlee (Millie Davis) is also attending. The only problem is that the boys don’t know how to kiss, and thus a can of sex toys, drugs, and general recklessness is opened. Hijinks ensue.

Although the world of sex is commonly referenced and explored, the film doesn’t feel chauvinist or immature. That’s because this intimate, and often kinky, world is being seen from the eyes of naïve youth – from wee boys who are still figuring themselves out and don’t know any better yet. To some that may make the film an extra level of gross. But to me, it opens up multiple comedic possibilities, many of which the film takes, whether that be discovering Thor’s parents’ S&M collection or something more general, like running across a motorway out of desperation.

It maintains a sense of goofiness to contradict and counterbalance the explicit material, making what could’ve been uncomfortably crass adorkable in a pleasantly amusing way.

But it’s not all just sex and swearing, as much as that is advertised in marketing. At its core is a rather heartfelt story about growing up and how friendship either evolves or dissolves with time. All three of the young performers have terrific chemistry together, feeling like a close-knit group that has known each other for years. Yet all three of them also have their own lives; their own aspirations and problems, things which may one day cause them to part ways. In that way, their loss of innocence that comes with the natural curiosity of sex and growing up may also mean further loss. It’s a genuinely compelling, bittersweet concept that the film executes well thanks to its brilliant young actors and surprisingly sensitive character building.

And most importantly, the film is funny. It works because it maintains a sense of goofiness to contradict and counterbalance the explicit material, making what could’ve been uncomfortably crass adorkable in a pleasantly amusing way. The best characters are a duo of teenage girls, Hannah and Lily (Molly Gordon and Midori Francis), who chase after the boys throughout the film after an incident involving a drone and drugs. I legit want to see a whole film with the two of them, they’re that funny. And they’re only one of several running gags that the film juggles tirelessly to full effect. Between them they cover pretty much every aspect of the sexual spectrum, but by retaining a good-natured core that its characters share, it allows us to engage with the material in a fun and sometimes insightful way.

The film does at times fall into the trap of having sex and profanity being the sole punchline of certain jokes. But the film’s amiable characters, and inherently genial heart, makes the experience both sincere and humorous. It’s pleasantly surprising in that regard. It’s not as funny, or as emotionally satisfying, as the comparable Booksmart, but that doesn’t mean it’s not successful in its own charming way. 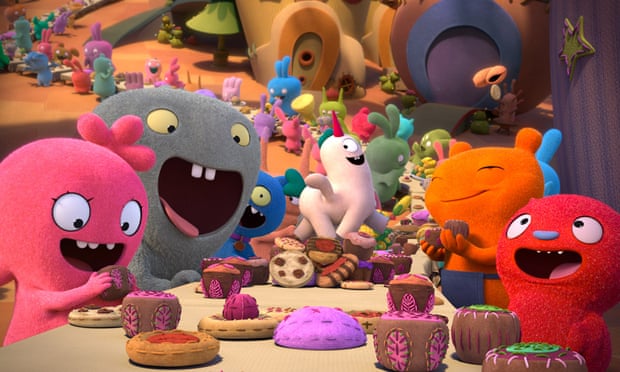 You know those films that are playing on TV in other films? Ones that the filmmakers clearly didn’t put much thought into because it’s playing in the background so why would they? That’s UglyDolls in a nutshell. It’s such a half-baked hodgepodge of jokes and ideas from better films that it’s hard to properly review – mostly due to how little I cared for it.

Moxy (Kelly Clarkson) is a pink doll that lives in UglyVille, where all the dolls that don’t look exactly human go. It’s easier if you just go with it. She believes that there’s a child waiting for her in a bigger world somewhere, and so ventures off with some friends to find one. Wouldn’t you know it, they stumble across a world where perfect dolls are made – teenage doppelgangers in school uniforms made into dolls, their leader being Lou (Nick Jonas). He challenges the UglyDolls to compete for the chance to enter the real world and find a child, believing that they’re too ugly to ever be loved. Moxy enthusiastically accepts and thus we have a film, supposedly.

I say supposedly as the film feels more like an advert for a toy line than a narrative story. The UglyDolls themselves aren’t really that ugly – they’ve clearly been drawn to look weird in a strangely cute way – but that’s not the problem here. Although the film’s heart seems to be in the right place concerning kindness and embracing differences, the way it goes about it is dully superficial. It feels like an excuse to tell obvious jokes and mug to the screen, with all of its morals having been told better in literally hundreds of superior films.

READ MORE FROM FILMSPACE: Dora and the Lost City of Gold; Playmobil: The Movie; The Art of Racing in the Rain

There’s no underlying cleverness to what the film is saying. All the perfect dolls looking alike could’ve been a smart commentary on how perceived societal beauty is designed to sacrifice individuality. Look at any two boy bands or male leads in teen romances and I guarantee they look identical. But the film is more concerned with overblown musical numbers and being as loud as humanly possible. It’s trying so hard to be relevant that it becomes off-putting.

Unlike other films though, we can’t even rely on the voice cast to give us brief moments of charm or wit. With casting choices like Nick Jonas, Charli XCX, and even Pitbull among others, you’d swear it was a collaboration on a music video instead. And it really shows, for the singing is solid, but the delivery of the dialogue leaves much to be desired. Combine that with its half-hearted messages, and irritating attempts at humour, and you get 90 minutes that may as well have been a time vacuum.

Indifferent annoyance is probably the best way I can sum up my feelings in regards to UglyDolls. It’s incredibly tedious, and slightly obnoxious. Yet the execution of its ideas are so devoid of integrity – right down to the problematic ending – that you forget about it almost instantly. Time clearly isn’t as precious a resource as I once thought if I’m willing to spend chunks of it watching films like this. Then again, even growing grass can seem entertaining if you stare at it for long enough. 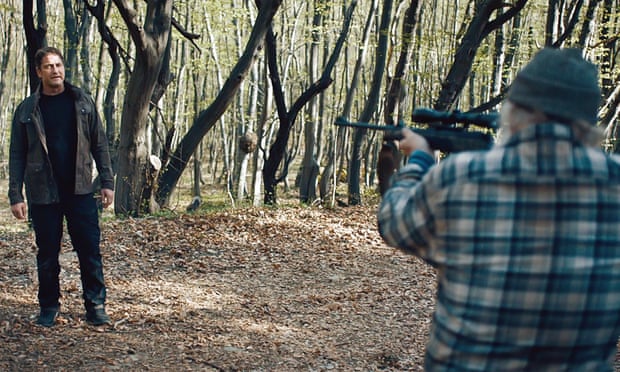 Has Fallen is an appropriate title for this unsolicited trilogy, for action movie standards fall every time someone pays to see one of them. I confess to liking Olympus Has Fallen, but it hardly warranted a continuation. London Has Fallen is only entertaining when viewed as a metaphor for Brexit. But Angel Has Fallen lacks the euphemism. In fact, it lacks rather a lot.

Gerard Butler continues to waste his talents as Agent Mike Banning, who spends the first portion of the film experiencing insomnia and dizziness as a result of the previous films. But who has time to meddle with that when someone tries to attempt a drone assassination on President Trumbull (Morgan Freeman). Banning is framed for the attempt, and thus finds himself alone and on the run from the law, as he endeavours to uncover who is really responsible.

Comparisons to The Fugitive aside, the problem with Angel Has Fallen is that it miscalculates what kind of film it ought to be. Disposable entertainment would be the apparent route to go with this considering the last two films. But the film takes itself far too seriously, becoming unbearable in the process. It presumes itself an intricate and intense thriller, and yet I predicted every plot point, from the real culprit(s) to upcoming lines of dialogue, so effortlessly that I may as well not have even bothered seeing the film before reviewing it.

There are hints of potential fun at times, but the writing is ludicrously laddish and juvenile. It pairs up characters like Banning and his estranged father (Nick Nolte) just because it can, and the action is completely on auto-pilot. The editing is jolty and rushed, to the point where we can’t follow what’s happening half the time. Any action we do see is derivative of the previous scene. Punches are thrown and guns are fired, all in repetitive fashion. It’s sleep-walking through its main selling point rather than indulging in the creative possibilities, and all because it wants to be taken seriously.

Angel Has Fallen promises grand spectacle, yet fizzles into nothing like a malfunctioning firework. It’s grating, ostentatious, and desensitises the mind with its capacity to bore.

This would’ve been fine had the film not been so nonsensical too. It attempts to be contemporary with references to Russian election meddling, but then uses its plot to spin a political conspiracy so farfetched it would make Flat Earthers and 9/11 Truthers look sane. It’s devoid of logic in the worst ways, and the characters are either side-lined or so beyond being interesting anymore that we feel like involuntary hostages rather than active investors. Even the goal of the conspiracy feels shallow, purely to coincide with the contradictory message. It masquerades as an anti-war film, yet features more try-hard gun violence than an NRA-funded porno.

Essentially, we have a movie that is all over the place in every conceivable realm. It’s too stupid to take seriously, and it’s too poorly made to shut your brain off to. If it had at least tried to further explore what Banning’s declining health and PTSD meant for him personally, I may have offered some leeway. But it wants to have its cake and eat it instead. Problem is the cake hasn’t even been baked yet.

Between the film’s abrasive woefulness, and the incredibly rude gentleman next to me, who decided to conduct a running commentary of the film to himself, pure stubbornness was the one thing that kept me in that screening. Angel Has Fallen promises grand spectacle, yet fizzles into nothing like a malfunctioning firework. It’s grating, ostentatious, and desensitises the mind with its capacity to bore. An appropriately lame end to arguably the decade’s least earned trilogy.