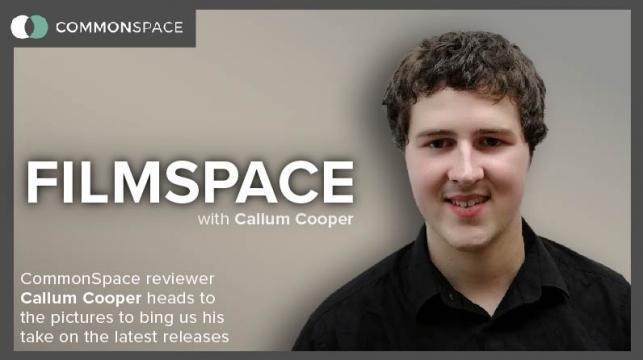 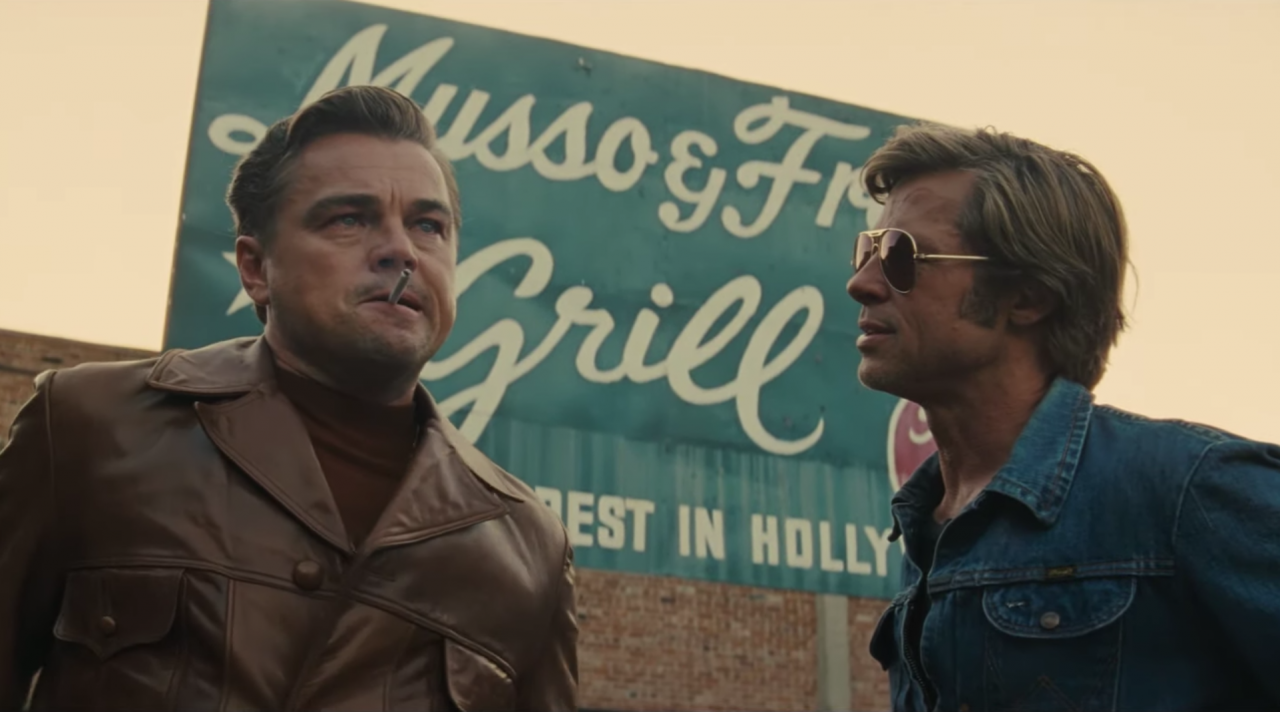 Once Upon a Time… in Hollywood is Quentin Tarantino’s most sombre film to date. Although there’s plenty of the usual Tarantino quirks floating about, it’s more of a self-reflective piece: a movie that not only celebrates a bygone era of cinema, but displays concerned with its own place in a changing world. It feels like Tarantino’s most personal work thus far.

The year is 1969, and Rick Dalton (Leonardo DiCaprio, in his first cinematic appearance since his Oscar-winning turn in The Revenant) is in Hollywood attempting to bag film roles, alongside his best friend and stunt double Cliff Booth (Brad Pitt). Dalton was a prevalent actor in the TV business years ago, known primarily for TV Westerns in which he would play the traditional hero. However, his inability to navigate the new Hollywood environment, twinned with his own alcoholism and anxiety, leaves Dalton wondering if his career is salvageable.

I have great respect for Tarantino, and I love many of his films. He’s not everyone’s cup of tea – and I do understand why, given the nature of his films – but his singular style, and his commitment to getting his vision made, for better or for worse, is something I’ve always admired. Once Upon a Time… in Hollywood is a welcome return to form after the somewhat underwhelming The Hateful Eight, although its surprisingly meditative qualities are unlike anything Tarantino has done before.

The film already has a level of infamy given certain creative choices. Set in 1969, the film takes place in the shadow of Charles Manson, whose cult is omnipresent throughout the film. Many Manson Family members are portrayed, such as Tex Watson (Austin Butler), Lynette ‘Squeaky’ Fromme (Dakota Fanning, whose performance meshes particularly well with the Tarantino style), and Linda Kasbian (Stranger Things’ Maya Hawke). But the most notable inclusion is that of Sharon Tate (Margot Robbie) as Dalton’s next door neighbour, which has understandably been met with uneasiness. I myself believe that the Tate murder is tired and easily exploitative material for a film. On paper, this storytelling choice seems perplexing, even for a Tarantino film.

MORE FROM FILMSPACE: Blinded by the Light

Yet in the context of the film, this decision really works. Unlike the most manipulative of Manson movies, the focus isn’t on Tate or the Manson Family. The focus is almost exclusively on Dalton and Booth, so much so that it feels as though Tarantino is holding back from his usual abrasive and rambunctious flair. And it’s a wise decision too.

The film isn’t about carnage or glamour, although both do feature to various degrees. In fact, one could argue the film is a bit uneventful, as it’s primarily concerned with Dalton and Booth as characters, and the sense of aimlessness they are feeling. Via the film’s impeccable production design, replicating the look and feel of 60’s Hollywood terrifically, as well as stunning cinematography that soaks in the awe of the world around them, and a cast that’s so vast it’s hard to keep track of all the noteworthy names, it’s understandable why Dalton feels so out of depth. The Hollywood world is one so gargantuan and clustered that it’s hard to know where to start if you want to navigate it. Tarantino’s script not only captures the size of this industry, but greatly humanises Dalton as someone who has had a taste of the success he craves, and is doing everything to recapture it, revealing both insecurities and self-loathing.

Booth is portrayed as more of a loose cannon. He has a reckless persona and an ambiguous nature to his backstory that makes him as undesirable as Dalton, while also giving Pitt more than enough material for him to sink his teeth into. With the amount of fun he is clearly having, Pitt was probably my favourite performance of the film. Tate’s inclusion, while undoubtedly a bit iffy to some, subtly strengthens the emptiness Dalton is feeling. Some reviewers have criticised how little screen time Robbie is given in a role that she shines in. While I do understand the complaints, I feel like this choice was deliberate, for Tate is portrayed as an ultimate goal for Dalton. She is framed as the embodiment of success, as someone who has conquered the landscape of Hollywood stardom. She’s an idea that Dalton is aspiring to. Even knowing about her eventual murder adds another layer, as we are left wondering what direction the film will go in when it inevitably has to address this.

Once Upon a Time… in Hollywood was not the kind of film I was expecting, but it’s all the better for that. It’s still a Tarantino film at heart, but, via the questions he seems to be asking himself, it feels like it was made by someone who has been shaped by age and experience as well.

It feels very much like Tarantino is contemplating his own future and role in the industry. I love Pulp Fiction and Inglorious Basterds as much as the next person – they’re top-tier Tarantino – but this film has a quiet level of maturity that those films arguably lack. Although the term “they don’t make movies like they used to” is one I find both false and condescending, Tarantino uses his love of cinema to capture the kind of magic 60’s cinema must have emitted for audiences and contributors alike. Yet he also captures how that magic is always evolving, perhaps too quickly for someone like Dalton.

The film is clearly a love letter to that era of cinema (the title directly references the 1968 classic Once Upon a Time in the West), but Tarantino also seems to be wondering how he can modify his style and vision to suit the advances made by modern cinema, portrayed perhaps most brilliantly in the film’s best scene. While shooting a film – another Western – Dalton has a conversation with a method actor, who happens to be an eight-year-old girl, the very opposite to Dalton’s middle-aged male. The conversation starts off lightweight, almost trivial. But like all of Tarantino’s best written moments, it reveals a lot of character – in this case both how out of his league Dalton is and how deep his despair runs. It feels as though the questions Dalton is contemplating are ones Tarantino may be asking himself as much as his audience.

Scenes like this are what make this film so different to Tarantino’s earlier works. Still, that’s not to say the film doesn’t still have its fair share of Tarantino-isms. Comedy has always been a strong point for Tarantino – look no further than the KKK bags scene from Django Unchained – and this film features quite a comic sensibility. Much of that comes from the banter exchanged between Dalton and Booth, such as a great moment where the two of them give commentary on one of their old TV shows. That classic, over-the-top nature that Tarantino has mastered still comes into play at instances, whether in the portrayal of the ridiculousness of Manson’s cult mentality or the glorification of the Hollywood lifestyle. There’s still plenty of wit lurking underneath the self-reflection.

Nonetheless, this isn’t a perfect film – far from it. While I respect its insistence on letting characters be themselves rather than staunchly sticking to a set narrative, this can lead to moments that feel meandering. Pockets of the film do feel empty, and some of the film’s creative choices regarding specific characters – particularly a scene with Bruce Lee – do feel problematic at best. The cast is so huge that it does sometimes seems like some big names are given little to do, and the film’s ending has proven very divisive if other reviews I’ve read are to go by. Personally I really liked it, and thought it underlined an ugly truth in the quest to obtaining fame, but I can easily see someone else saying that it undermines the moral point of the film, and they’d have a good case for it. More so than with Tarantino’s other films, I don’t think it’s going to work for everyone who sees it. But those who do dig what the film is setting out to achieve will find more than enough to relish.

Once Upon a Time… in Hollywood was not the kind of film I was expecting, and it’s all the better for that. It’s still a Tarantino film at heart, but, through the questions he seems to be asking himself, it feels like it was made by someone who has been shaped by age and experience as well. It’s much more nuanced in that regard than Tarantino’s previous work. It’s probably one of those love it or hate it experiences, and perhaps not unjustifiably so. But if Tarantino continues down a path of self-reflection that he seems to have started walking with this film, then I’m excited to see what the future has in store for him.