Film critic Calum Cooper reviews the latest film from Australian filmmaker Jennifer Kent, a film that is both tough and harrowing, but rich in power and craft. 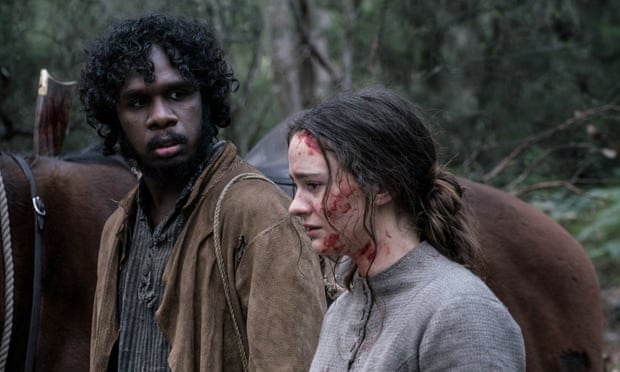 Jennifer Kent first graced our cinemas five years ago with The Babadook, which, in my opinion, is the single best horror film to emerge from this past decade. In telling the story of a disgruntled mother and her ‘difficult’ son – a story that could be interpreted as either literal or metaphorical – Kent has solidified herself as a filmmaker who tells tales of women enduring and surviving hardships. Her latest film, The Nightingale, continues this trend powerfully. However, I would advise audiences to do some research into its 18 certificate, as its depictions of many types of violence may be far too extreme to handle.

Set during the Black War in 1825’s Tasmania, Aisling Franciosi of Game of Thrones plays Clare. She is an Irish convict who is forced to serve a British Army unit in exchange for eventual freedom, commanded by Lieutenant Hawkins (Sam Clafin). He’s a horrendously vile individual who holds Clare’s and her husband’s status as immigrant convicts over their heads, using it to take advantage of Clare mentally and sexually. After a day of egregious tension, Hawkins and some of his battalion rape Clare and kill her husband and child in a horrific sequence that will no doubt test many a viewer’s endurance.

Hawkins leaves the next day, taking one of the Aboriginal people as a guide so that he can arrive in Launceston for a promotion. Fuelled by grief and rage, Clare decides to take another Aboriginal guide, the distrusting Billy (Baykali Ganambarr), and sets after Hawkins. She is determined to kill him whatever it takes, but the journey toward revenge has many physical and mental obstacles to overcome.

Revenge films, particularly ones with this much sexual content, are challenging genres to pull off without going into putrid pandering. The worst film ever made is 1978’s I Spit on Your Grave for its exploitative nature. This is not a mistake that Kent makes with The Nightingale. Although its first twenty to thirty minutes are some of the hardest to watch in this year of film, Kent uses these scenes not for the purpose of exploitation, but for the purpose of understanding Clare’s anger; using it as a platform of justification for her later actions. The necessity of the early brutality is in the eye of the beholder, but the artistic utilisation that Kent appears to be aiming for is clear.

Unlike other revenge films, The Nightingale’s central character and themes are clearly defined. Clare could’ve been a faceless victim, but she is instead written as a complex individual who suffers disgusting treatment due to her past and identity. But her attempts to confront her mistreatment could take her down a path just as dark. In other words, the film genuinely and articulately deals with the consequences of a situation this awful. Is revenge the right path, no matter how justified? But in a time like 1825 Tasmania, what other options do Clare or her Aboriginal guide Billy really have when facing such injustice?

The film really gets absorbing when these two characters set off after Hawkins, one an immigrant convict and the other a mainlander whose land was stolen and culture was decimated. They are both victims of contemporary time, and of movements and people with superiority complexes. So much so that their mistrust of one another forms the initial foundations of their relationship. Both Franciosi and Ganambarr have magnetic presence together, working off of each other’s anger, distrust, and, eventually, mutual understanding. Franciosi in particular steals every moment she is in with her sheer visceral energy. Her fury is scarier than most recent horror films, both in its magnitude and in its justification. It’s one of the best performances I’ve seen this year, thus I fear it will go criminally unrecognised come award season.

Anger and sorrow are emotions The Babadook tackled as well, albeit on a more psychological level. The Nightingale looks at them from a physical angle, and the extremes we find ourselves capable of going when anger and sorrow are all we have to drive us. No matter how much rage we feel, will it ever be enough to quell our sadness? Clare goes after Hawkins out of rage, but as Billy, a man containing just as much pent up anger, implies on their travels, once she’s done the deed what then?

Anger and sorrow are emotions The Babadook tackled as well, albeit on a more psychological level. The Nightingale looks at them from a physical angle, and the extremes we find ourselves capable of going when anger and sorrow are all we have to drive us.

It’s a terrifying thing to think about, and Kent’s craftsmanship compliments it in thrillingly unpleasant ways. Its boxed in aspect ratio of 1.33.1 harkens back to Robert Eggers’ choice of aspect ratio for The Witch, as both use these ratios to essentially oppress their characters both environmentally and internally. The use of shadows and how they obscure imagery or enhance the film’s tone is creatively and hauntingly harnessed, while the utilisation of handheld cam places us uncomfortably in the moment, leaving us feeling as trapped as the central duo. Say what you will about the film’s content, but Kent expertly directed this film down to the letter.

But of course the content cannot be overlooked. This is a rare film that earns its 18 certificate, for better and for worse. Several scenes, notably within the first act, are very difficult to watch, and will understandably be too much for some eyes. While Kent is fully aware of this fact, and treats such scenes with maturity, sometimes there is too much of an emphasis on the brutality, to the point where it leaves you cold rather than shocked. It’s also a gruellingly paced movie. Artistically so in fairness, but a 136 minute running time that’s deliberately slow paced would be enough to test anyone’s patience, especially given the horrifying narrative.

One of my favourite poems is John Keats’ “An Ode to a Nightingale”, where a man travelling through a forest dwells in negative thoughts, before being temporarily raptured by the beautiful song of a nightingale. Birds are a recurring metaphor in The Nightingale, from Billy’s Aboriginal name, to Clare’s nickname given her miraculous singing voice. Underneath the veil of beauty in such a majestic, seemingly benign, creature is a concealed capacity for wrath. If wrath doesn’t best some up The Nightingale then no other word can do it justice. Jennifer Kent has made another terrific film which only further demonstrates how exciting a voice she will be going forward into the new decade. It’s a remarkable film, but I don’t know if I’d be strong enough to watch it again.