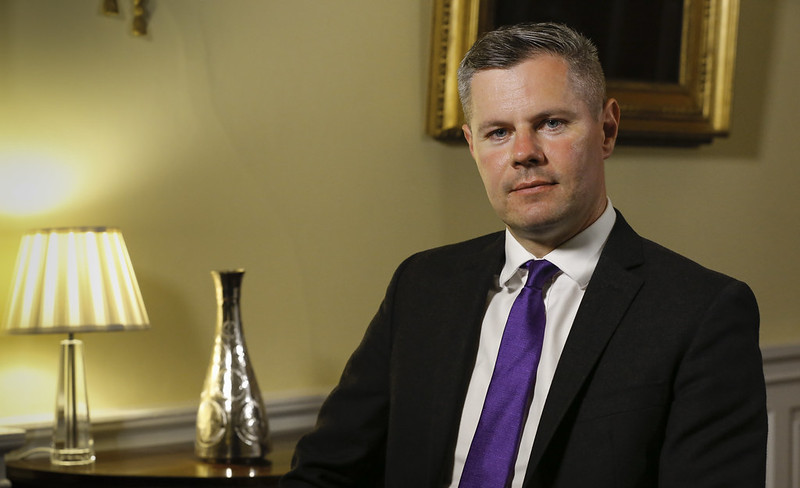 The Scottish Government’s budget will be published on 6 February, ahead of the UK budget on 11 March

THE SCOTTISH GOVERNMENT budget will be published on 6 February, over a month before the UK budget, Finance Secretary Derek Mackay has announced.

Mackay argued that delays by the UK Government had “made it impossible” for the Scottish budget to be published after its UK equivalent.

Chancellor Sajid Javid confirmed last week that the UK Budget would be pushed back to 11 March, prompting the Convention of Scottish Local Authorities (Cosla) to warn of “catastrophic risks” to local authority services.

Commenting today [13 January], Mackay said: “The UK Government’s approach to the Scottish budget has been completely unacceptable and has shown a disregard for devolution and a lack of fiscal responsibility.

“The timing of the UK budget made it impossible for us to publish our own budget after the UK Government’s without drastically restricting the time for parliamentary scrutiny.

“The UK Government’s approach to the Scottish budget has been completely unacceptable and has shown a disregard for devolution and a lack of fiscal responsibility.” Finance Secretary Derek Mackay

“In these exceptional circumstances, created by the UK Government, it is vital we give local authorities and public services clarity on their budgets. That is why we have made the decision to publish our budget in February which will allow local authorities to set their budgets and council tax before the legal deadline of 11 March.

“I look forward to publishing a budget that will help tackle the global climate emergency, reduce child poverty and boost the economy.

“We will work closely with the Scottish Parliament to agree a timetable for the Budget Bill to allow for maximum scrutiny while ensuring certainty for Scotland’s vital public services.”

The confirmation of a Scottish budget date follows Mackay’s entreaty to Chief Secretary of the Treasury Rishi Sunak last week, appealing for greater flexibility from the UK Government to allow the finalisation of the Scottish budget.

In an 11 January letter responding to the announcement of the UK budget date, Mackay expressed his disappointment that there had been “no communication” with the Scottish Government prior to the 11 March date being publicly confirmed, and offering a “flexible approach” to block grant adjustments if the Scottish budget were to be published ahead of the UK’s.

Harvie said: “This entirely avoidable crisis has been created by the irresponsible UK Government, and it’s throwing Scottish public services into uncertainty. There is no risk-free way for the Scottish Government to deal with this situation, but waiting until mid-March to publish a budget would be the most damaging option, so we welcome the announcement that it will be published before the UK budget.

“But the backdrop of Tory chaos must not let us lose focus on what’s actually needed from Derek Mackay – Scotland needs a climate emergency budget which changes direction on polluting transport policies, invests in low carbon solutions and creates new jobs in green industries, while protecting local services around the country.

“Greens have been successful in recent years in achieving change in the budget process, and even with the tight timetable ahead we’ll keep working to promote positive, creative solutions to the challenges Scotland is facing.”

Further criticism of the overdue UK budget date was voiced by SNP MSP for Skye, Lochaber and Badenoch Kate Forbes, who noted that 11 March is the date by which local authorities must legally set their council tax.

Forbes said: “That leaves less than a month for Highland Council, never mind the Scottish Government to respond and set a budget before the beginning of the tax year. Furthermore, it is the exact same date by which Highland Council have to legally set Council Tax.

“It shows the complete disregard the UK Government has for Scotland, and indeed for the Highlands. Our public services, infrastructure and tax policies all depend on clarity from the UK Government. Either the Tories don’t know or don’t care.”

The confirmation of the date of the Scottish budget coincides with the launch of a new campaign from Cosla, urging the finance secretary to increase investment in Scotland’s councils.

According to the Cosla-produced briefing document ‘Invest in Essential Services’, there has been a significant reduction of local government funding since 2013/14 and an erosion in the flexibility of how Scottish councils can spend their budget.

Between 2013/14 and 2019/20, national policy initiatives have increased, and now account for 60 per cent of Scottish council budgets. As cuts can only be applied to the remaining 40 per cent, the effect of these cuts is all the greater.

An extra £1 billion of revenue funding would permit new spending commitments from local authorities, as well as making up for cuts and accounting for the impact of inflation, Cosla argue.

“If we are to truly realise Scotland’s potential then local authorities must receive a fair settlement.” Cosla President Alison Evison

Speaking at the campaign’s launch this morning, Cosla resources spokesperson Councillor Gail Macgregor said: “Cosla’s vision is that Scotland’s communities are sustainable, vibrant places to live, work and visit. Every year, councils invest in a huge range of services and capital projects that are key drivers for economic growth.

“However, ringfencing and Scottish Government-devised policy initiatives mean that more and more has to be delivered from an ever decreasing portion of local budgets.

“The reality is that services such as roads, buses, paths, planning, community learning, events, sports facilities, libraries, tourism, business support and environmental health all sit unprotected. These services are what make our communities attractive places to live, work and visit.

“Local Government’s role in creating sustainable communities cannot continue to be underestimated. The public rely on us as leaders and as a provider of vital services.”

“Sadly however, whichever way you want to dress it up, the reality is that in recent budgets the Scottish Government has chosen to overlook the essential services that communities rely on day in day out.

“Our vision for Scotland’s communities depends on fair funding for council services. If we are to truly realise Scotland’s potential then local authorities must receive a fair settlement.”

Concerns over local government cuts have been particularly acute in Edinburgh, where fears have grown over a potential £4.8 million cut to the capital’s social care services.

According to an Edinburgh City Council document seen by the Edinburgh Evening News, this cut – an “efficiency target” for the Edinburgh Integration Joint Board – is being considered by the SNP-Labour coalition as part of its attempt to make savings of £36 million in its 2020/21 budget.

SNP councillor and city finance convener Alasdair Rankin has stated that the council will not set out its spending plans until it knows how much funding it will receive from central government over the coming year.

Rankin said: “We hear from the Conservative government at Westminster about increased spending on health and education and the police and also infrastructure. If all those things are going to happen there would be Barnett consequentials – more money coming to Scotland.”