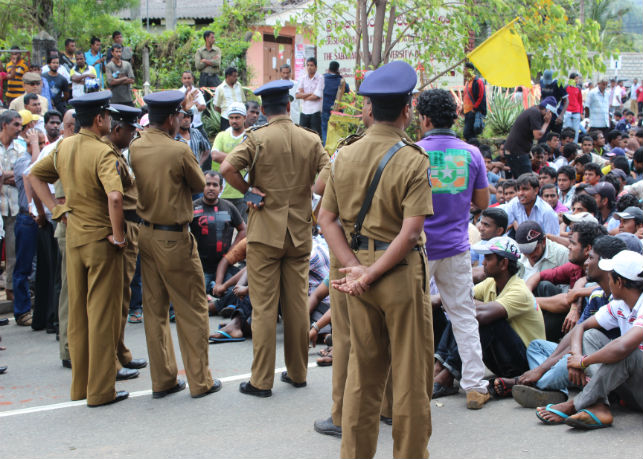 BUDGET pressures are impelling Police Scotland to supply training to police forces in other countries, according to the force’s chief constable, despite the fact that some forces are accused of torture.

Phil Gormley, who took the top post in Scotland’s police service in January this year, told the UK Parliament’s Home Affairs Select Committee that the national police force, formed in 2013, was “legitimately raising revenue” by providing training to foreign police forces due to “significant budgetary pressures”. The forces which Police Scotland has trained include those in Sri Lanka and the United Arab Emirates; both have been accused of widespread human rights abuses.

Quoted in the Scotsman Gormley said: “We are under significant budgetary pressures. If you can legitimately raise revenue in terms of cost recovery from sporting events or through the delivery of training domestically or internationally, then we will seek to do it.”

The statements to the Westminster committee came after investigative news website the Ferret revealed that new evidence of torture in Sri Lanka had not dissuaded Police-Scotland from extending its training contract, via the Scottish Police College, with Sri Lanka’s National Police Academy (NPA).

The campaign group Freedom from Torture has revealed that since the election of a new government headed by President Sirisena last year 17 Sri Lankan torture victims have been referred to the group.

Police Scotland has been training Sri Lankan police forces since 2007, shortly before the final escalation of the 25 year Sri Lankan civil war. In 2009 the Sri Lankan army finally destroyed the Tamil Tiger insurgency in the north of the country, using tactics such as artillery bombardment of ethnic Tamil areas and mass internment which were condemned around the world.

Police Scotland first renewed its contract to develop NPA in 2015. Widespread human rights abuse allegations have been made about the behaviour of Sri Lankan security forces in the aftermath of the conflict.

The Scottish force maintains that its training is aimed at improving the human rights record of the forces with which it is engaged.