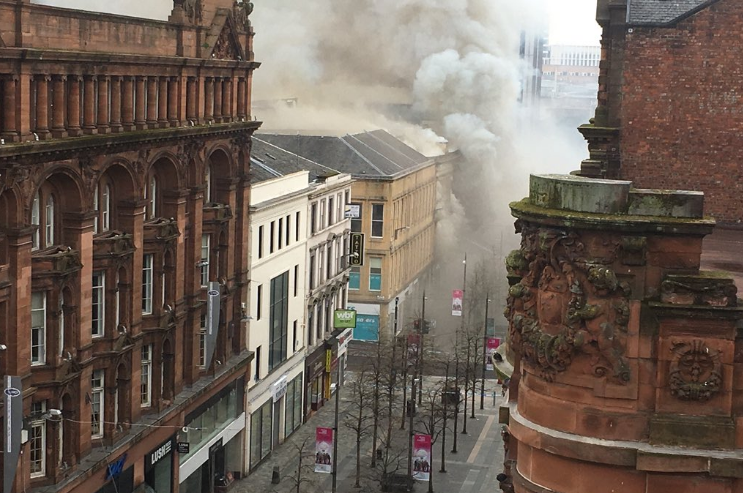 AFTER A major fire took hold on Glasgow’s Sauchiehall Street on Thursday morning, the Scottish Fire and Rescue Service is continuing its work to fully extinguish the blaze.

Described by chief fire officer Alasdair Hay as “one of the largest incidents the Scottish Fire and Rescue Service has faced”, the fire started at Victoria’s nightclub and spread to other commercial properties in the building.

Concerns were raised around the fate of nearby buildings including the historic Pavilion Theatre, but the worst of the damage was contained within the block, the fire service has reported.

Around 30 firefighters and eight fire engines are still at the scene, with the fire expected to continue for days. Over 120 firefighters attended at the height of the fire.

Nobody was injured in the incident, and following fears of the spread of asbestos, the fire service confirmed that atmospheric testing has now concluded there is “no risk to the public from asbestos”.

Chief officer Alasdair Hay added: “There is still a lot of work to be done on the ground to ensure that this fire is completely extinguished.

“We will remain on the scene for as long as it takes and we are absolutely committed to preventing any further damage to surrounding properties and ensuring the area is made safe.

“This was an incredibly difficult and complex incident – but the actions of our firefighters were and continue to be outstanding.”

A number of local businesses remain closed as firefighters continue their work, and the Pavilion Theatre, Theatre Royal and Scottish Opera have announced the cancellation of shows scheduled over the weekend as a result of the smoke.

Iain Gordon, general manager of the Pavilion Theatre said the theatre was likely to be closed for the next few weeks due to smoke damage.

“We are absolutely committed to preventing any further damage to surrounding properties and ensuring the area is made safe.”

He said: “Inside the theatre, there is a considerable amount of ash and black dust and due to the warnings given by Fire and Rescue about asbestos in the air, we cannot allow staff or customers back in prior to the air/dust being tested by a specialist and confirmed to be safe.

“We also need to ensure that there has been no damage due to the excessive heat to our roof and gable end of the theatre and again, this will take a day or two to get reports carried out properly by structural engineers.

“Finally, and most important for the safety of our customers and staff, we need to ensure that the building and it’s emergency systems are safe for use again.”

Gordon said the theatre had received a wave of messages of support, adding: “It is nice to know that The Pavilion has so many great memories for both young and us oldies. I personally have enjoyed every minute since first starting here in 1977.

“I would again like to thank everyone for their kind thoughts and patience at this time and it is these kind of comments that makes it all worthwhile.”

Police Scotland has confirmed that a joint investigation is ongoing to establish the cause of the fire, but that it is not believed to be suspicious.