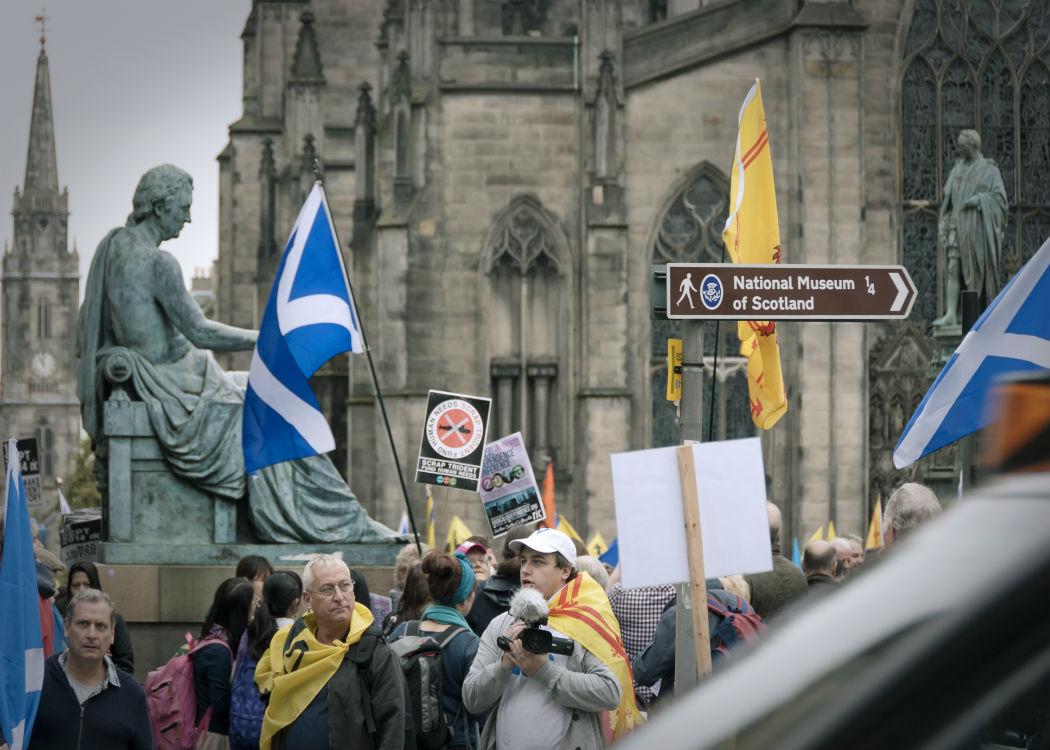 YES CAMPAIGNERS are far to the left of the Scottish National Party, the first in-depth research into pro-independence activists has shown.

The survey of 993 Yes campaigners – a representative sample – was compiled and analysed by Dr Iain Black, head of the marketing group at the school of management and languages at Heriot-Watt University, and Sara Marsden social researcher and activist with Common Weal Edinburgh North and Leith.

They have been released to coincide with what would have been Scotland’s ‘independence day’, 24 April, had Scotland voted Yes in the its independence referendum, held on 18 September 2014.

The study found that on average, on a scale of one to 11 with one representing the furthest left and 11 furthest right, Yes campaigners, at 3.19, were significantly to the left of the SNP at 4.31. Though they were closer to the Greens at 3.35, they were to the left of them as well.

Marsden said: “The hope for a more socially just democratic future for Scotland seems to have acted as a strong unifying idea, helping to build a movement for change growing well beyond the party structures which seeded the original campaign. Along with the evidence of continued increased political activism this bodes well, with engaged and increasingly organised citizens working for a better Scotland.”

A substantial number, 39.2 per cent, said they had participated in the leftwing Radical Independence Campaign (RIC).

The figures represent a more detailed picture of Yes activists than has been seen before.

They average Yes campaigner contributed around 10 hours of activism per week at the height of the campaign, with several of those interviewed giving figures of up to 100 hours per week.

Yes activists were slightly older than the population at large, at 51. But the data also represented a wide age range of campaigners, from children to the very elderly.

A majority of campaigners were male, at 57.5 per cent. However women, who made up 39.6 per cent of activists, were more likely to be newer to campaigning, showing that Yes activism attracted more women as the movement developed.

What also emerged from the data was a picture of a campaign which was an overwhelmingly positive experience for those who participated.

There was an unprecedented level of engrossment in the campaign, with 96.7 per cent displaying a Yes poster in their window. Ninety-five per cent wore Yes merchandise including clothing, badges and wristbands.

With one representing a lack of positivity and five a great deal of positivity, Yes campaigners awarded their experience of local Yes groups 4.57.

Black said: “The results from this survey show a highly diverse group of volunteers expressing remarkable similarity in what they did, what they experienced and expressing a uniform intent to stay engaged in the campaign for Scottish independence.

“We tried to assess whether it was, as some claimed, the biggest grassroots campaign in Scotland’s history, we can only answer that by saying those involved certainly thought so.

“The results of this survey strongly suggest that when the starting gun is sounded next time, the grassroots independence campaign will contain a formidable range of experienced, knowledgeable passionate campaigners who have experience running local groups and local campaigns and feel they know how to persuade friends, families and strangers alike.”

The full report can be read here .

Yes campaigners: Who they are and what they think

– Significantly to the left of the perceived political centre ground

– Heavily engrossed in the campaign, with nearly all sporting Yes merchandise and advertisements

– Substantial cross-pollination between Yes organisations: 39 per cent participated in Ric, 30 per cent in National Collective