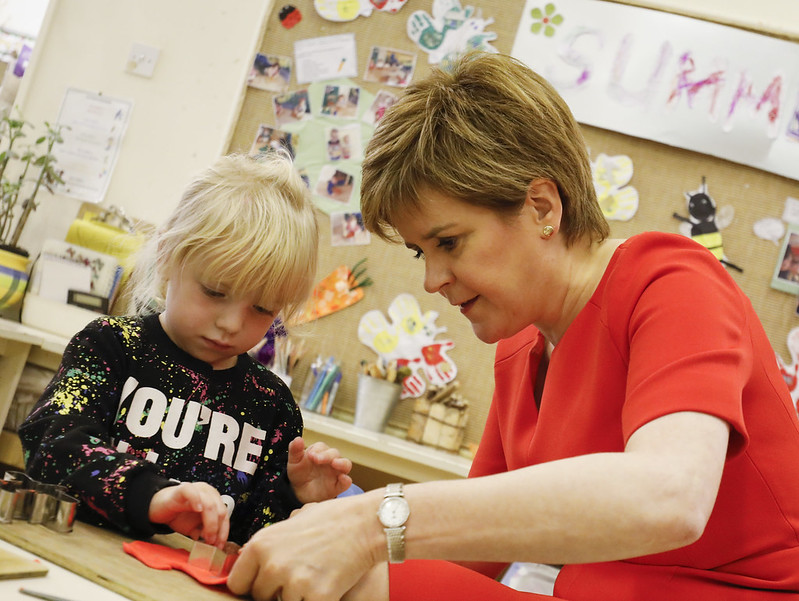 Nicola Sturgeon: “The process by which we choose Scotland’s future … must must be legal. And it must have the recognition of the international community.”

FIRST MINISTER Nicola Sturgeon announced in her party conference speech today (15 October) that, if elected at the next Holyrood election, an SNP government will fund holiday childcare for primary pupils from the poorest families.

The announcement was one of several new policy pledges made in the party leader’s closing speech. Sturgeon said that she would “have more to say on this in the months to come” but revealed that this  would provide “full days of high quality childcare, freeing parents to work, to help them lift their families out of poverty”.

In another election promise, Sturgeon said that he SNP would scrap non-residential social care charges for everyone in the next parliamentary term. This follows an extension made in April this year of free personal care to people of all ages.

She said: “The principle behind free personal care is the same as free health care – if you need help you should get it. But despite that principle many people – of all ages – still have to pay for non-residential social care services.”

In the current parliament, Sturgeon announced that the Scottish Government will introduce new legislation to establish emergency protective orders for women and children experiencing domestic abuse. She said this had come as a result of organisations like Scottish Women’s Aid telling the government to “go further” on protecting domestic abuse victims.

She explained: “We need to change the reality that for women and their children, often the only way to escape an abuser is to flee their home. For too many, that results in the victims of abuse becoming homeless.

“It should not be the victims of abuse who lose their homes, it should be the perpetrators. These orders will help to ensure that is the case.”

And, in what she described as a demonstration of “acting locally as we lead globally in making our contribution to tackling the climate emergency”, Sturgeon announced a new investment of £27m for 200 local projects around the country to “make it easier for people to cycle and to walk”.

The First Minister also reiterated her call for an independence referendum, which she said “must happen next year”.

She said: “By the new year, we will have completed our legislative preparations. We are already working to update the independence prospectus.

“And I can confirm today that before the end of this year, I will demand the transfer of power that puts the legality of a referendum beyond any doubt.

READ MORE: #SNP19: ‘Plan B’ debate rejected as Sturgeon confirms a Section 30 order will be sought in ‘a matter of weeks’

Sturgeon largely focused her speech on making the positive case for Scottish independence, outlining examples of the SNP’s record in government, and on setting the independence movement apart from the “disaster” of Brexit.

The first minister said: “We will win our independence – but not the Brexit way. Not by undermining democracy, demonising those who disagree, and plastering lies on the side of a bus.

“We will win by inspiring and persuading. So let us resolve today that how we campaign for independence will always reflect the open, tolerant, inclusive and democratic nation we are determined to build.

“The process by which we choose Scotland’s future must be capable of actually achieving independence. It must allow majority support to be expressed clearly and unambiguously. It must be legal. And it must have the recognition of the international community.”

Sturgeon also emphasised that “an independent Scotland will be a voice that celebrates and champions diversity” and pointed to the legislation currently going through the Scottish Parliament which aims to extend the right to vote in Scottish elections to legal residents of all nationalities.

She added: “There will be no hostile environment for migrants in an independent Scotland. And the SNP will always speak up, without fear or favour, for democracy and human rights.”

Comparing the “two futures” possible for Scotland, Sturgeon said that a no deal Brexit was “unthinkable” and that “a deal of the type Boris Johnson is proposing would not be much better”.

She continued: “His plans would take Scotland out of the EU, out of the single market and out of the customs union. Let me make this absolutely clear today: SNP MPs will not vote for that – not now, not ever.”

Sturgeon argued that the case for union had been “shattered”, not only by Brexit and the election of Boris Johnson as Prime Minister but by a “welfare state that is being dismantled by another government we didn’t vote for”.

She added: “It is inexplicable to me that anyone who cares about social justice would want to leave powers at Westminster, when that so often means leaving them in the hands of right-wing Tory governments.”

Contrasting SNP policy with the Tory government, she highlighted the introduction of the Scottish Chid Payment and said it would include “no two-child cap and no abhorrent rape clause”.

Sturgeon also noted that a General Election was imminent and that some polls suggest a hung parliament.

In a pointed challenge to Labour, the first minister said: “The SNP will never put the Tories into power. But I have a message for any Westminster party that wants SNP support.

“If you don’t respect Scotland’s right to choose our own future at a time of our own choosing, don’t even bother picking up the phone.”