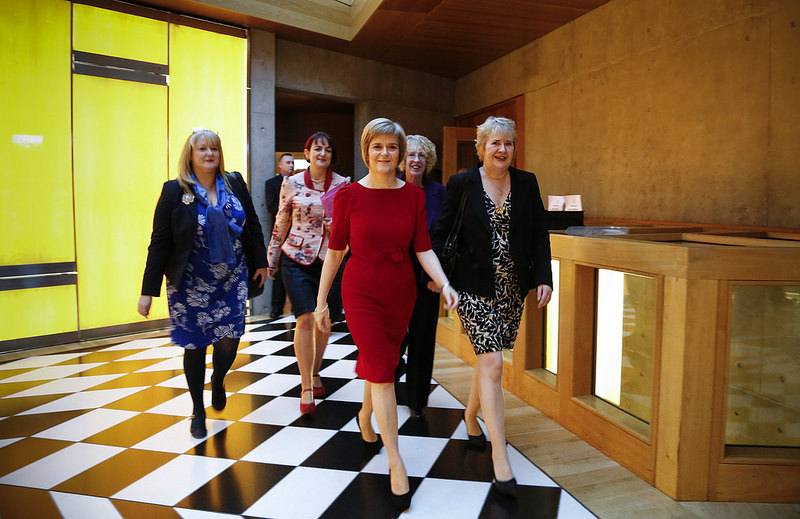 FIRST MINISTER NICOLA STURGEON has praised those who responded with “resilience” after extreme snow interrupted vital services and Scots in the worst hit areas rushed to the aid of vulnerable neighbours who were left without normal support.

Local councillors and ordinary people co-ordinated support across Scotland, ensuring NHS staff could be transported to work safely and visiting vulnerable neighbours who were left without their ordinary homecare service. Volunteers have also worked to clear roads from snow to assist struggling local authorities.

Speaking ahead of a visit to a Lothian Bus depot in Edinburgh, Nicola Sturgeon said: “The extreme weather we have been experiencing is almost unprecedented in its severity, and has clearly presented major challenges to Scotland’s infrastructure.

Read more: Scots turn out to help those in need as extreme snow hits communities

“It has been a testing time for everyone, but I have been enormously encouraged to see the response from communities coming together, supported by volunteers, and dealing with those challenges together.

“On behalf of the entire country, I would like to thank emergency workers, the public and private sectors, and thousands of volunteers who have done excellent work over this period, with many going above and beyond the call of duty to keep people safe and looked after – including home help staff, social workers, maintenance and roads teams, and those – including the military – who provided staff and resources to support our health services.

It has been a testing time for everyone, but I have been enormously encouraged to see the response from communities coming together.” First minister Nicola Sturgeon

“We should also extend our thanks to the partners and families of those who have been working round the clock to keep Scotland safe, with many unexpectedly separated from their loved ones for a number of days dealing with the many challenges that the extreme weather brought.

“And of course, I’d also like to thank those staff who have managed to maintain our transport networks during some particularly trying conditions.”

CommonSpace spoke to Fife Councillor Mary Lockhart who organised the community response in her area, including the delivery of essential medication to patients who could not make it to the pharmacy.

In another area of Fife, volunteers and a local farmer helped to clear a path to a care home to allow a funeral director to collect a person who had recently died.

“I would urge the Scottish public to remain vigilant.” First minister Nicola Sturgeon

The Met Office warned that the weather would continue to be challenging in some parts of Scotland, with an updated yellow ‘be aware’ warning for snow and ice warning in place until Tuesday.