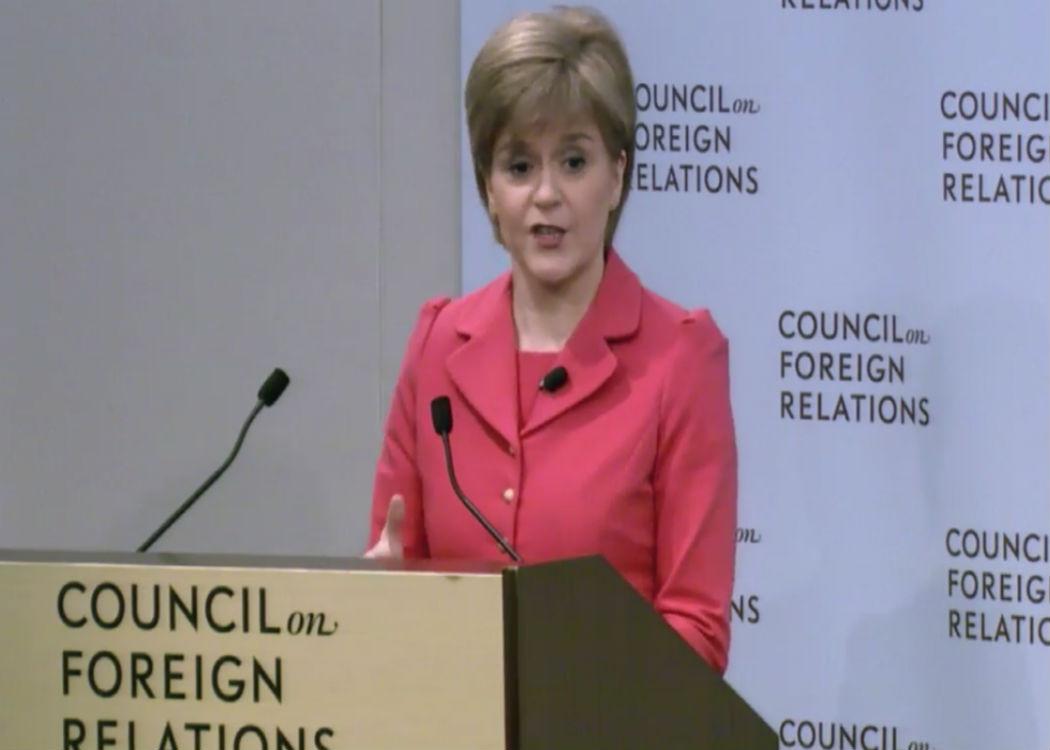 RIC: “A new foreign policy means a new relationship with the world, and Scotland should have no truck with the ‘Halliburton approach’ to international relations”

FIRST MINISTER Nicola Sturgeon has been criticised by the Radical Independence Campaign (RIC) for a speech at the Council on Foreign Relations in Washington, in which she said Scotland sees itself as a “key ally” of the US and that it has the same position as the UK Government “on the vast majority of international issues”.

RIC said that US foreign policy had caused “untold carnage” across the world.

Sturgeon focused her speech to the influential think-tank on the issue of the EU, positioning herself as a more reliable supporter of keeping the UK in the European Union – a position the US Government supports – than Prime Minister David Cameron.

She was asked about what an independent Scotland’s relationship would be with the wider world, including the US, and said: “The United States, in that scenario, would go from having one close ally in the United Kingdom, to having two close allies – Scotland and the remainder of the United Kingdom.”

Sturgeon added: “We would consider ourselves to be a key ally of the United States. We want to work constructively within the world community, to make sure we play our part in resolving some of the conflicts and issues of challenge we face in the modern world. We would want to be a continuing member of the Nato alliance to be part of collective security.”

“Do not think that the SNP and the Scottish Government takes a markedly different position from the UK Government on the vast majority of international issues, we don’t.” Nicola Sturgeon

The first minister was asked about the Scottish Government’s position on the Ukraine-Russia conflict and on Syria and Iraq. She said she was supportive of the position of the UK Government.

“We’re supportive of the sanctions against Russia and have been a voice of support within the UK for the government’s position,” Sturgeon said. “Similarly on Isil, Syria and Iraq, we support the efforts of the international community. The Isil threat is one of the most severe threats that not just the Middle East faces but the wider world as well because of the implications of that.”

“Do not think that the SNP and the Scottish Government takes a markedly different position from the UK Government on the vast majority of international issues, we don’t. We are a responsible voice on these matters,” she added.

Sturgeon was pushed on what the differences were on international and defence issues, and stated that her government held differences with the United States on opposition to the Iraq war and scrapping Trident nuclear weapons from the Clyde.

A RIC spokesperson told CommonSpace that they had an entirely different view on the US’ role in the world than the one expressed by Sturgeon in Washington.

“Everyone knows that the foreign policy of the United States has caused untold carnage all over the world in the pursuit of power and profit for large corporations,” the spokesperson said.

“They have undermined democracies, invaded and occupied oil rich lands and have pursued an agenda out with international law to secure their hegemonic position.

“Scotland, and indeed the UK, should have nothing to do with such military adventurism, and should instead focus on building a relationship with the people of America who are organising against low pay and institutionalised racism. Our foreign policy must be based on peace.”

“Scotland…should instead focus on building a relationship with the people of America who are organising against low pay and institutionalised racism.” RIC spokesperson

The RIC spokesperson raised the issue of Sturgeon’s comments on the satirical ‘Daily Show’ on Monday [8 June].

When questioned by host Jon Stewart about whether the US could invade Scotland for its oil, she joked: “I think this is progress because you just heard there Jon, presumably on behalf of the United States, ask permission to invade an oil-producing country. It doesn’t usually work that way.”

The RIC spokesperson said that the First Minister “was right to say that the US don’t ask for permission to invade oil countries.”

“A new foreign policy means a new relationship with the world, and Scotland should have no truck with the ‘Halliburton approach’ to international relations,” the spokesperson added.

RIC opposes the US’s role as the leading global military power and supports an independent Scotland making a clean break with the UK and US’s ‘special relationship’.

Sturgeon also met Christine Lagarde, IMF chief, on Thursday [11 June], and had a meeting with an official at the White House about security issues, including Trident.