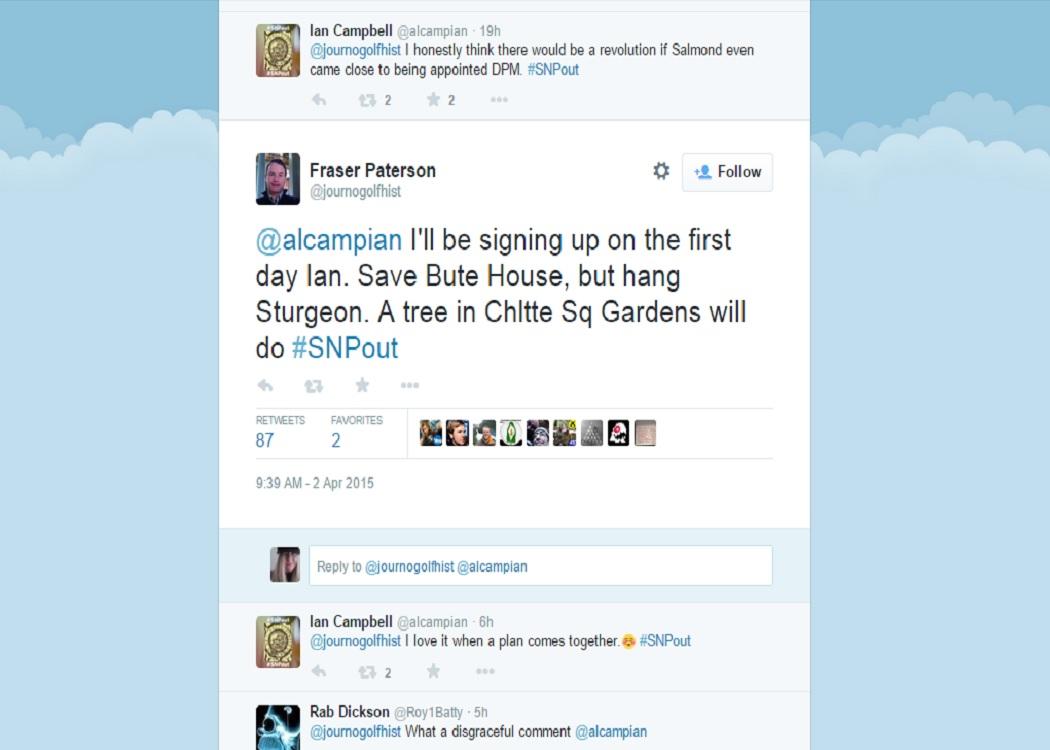 A JOURNALIST has apologised on Twitter following widespread condemnation after he published a tweet saying Nicola Sturgeon should ‘hang’ if the SNP gains more power in Westminster.

Fraser Paterson, a freelance journalist who writes about golf and Scottish history, made the comments on Thursday and faced a Twitter backlash for targeting the First Minister.

In a conversation on the social networking with someone who said there would be a revolution if Alex Salmond became deputy prime minister after the 7 May General Election, Paterson said: “I’ll be signing up on the first day Ian. Save Bute House, but hang Sturgeon. A tree in Chltte Sq Gardens will do #SNPout”

The situation escalated when disgusted Twitter users picked up on the comment, and Paterson later issued an apology saying: “My ‘hang Sturgeon’ comment was over the white line and unprofessional of me. I mean no harm to her”

It was too late for The List Magazine, however – a title he’d previously written for – which was quick to distance itself.

The magazine tweeted: “Fraser Paterson is not a staff member. He did very little for us, well over a year ago, and he is no longer on our list.”

On his website, Paterson says he has been published in Scottish Golf News, STV Local and Scots Magazine. He also writes charity profiles, restuarant reviews and does PR work.

Fraser Paterson is not a staff member. He did very little for us, well over a year ago, and he is no longer on our list.

So, @Telegraph calls @NicolaSturgeon “most dangerous woman in politics” & bigots like @journogolfhist want to hang her. How disgusting.