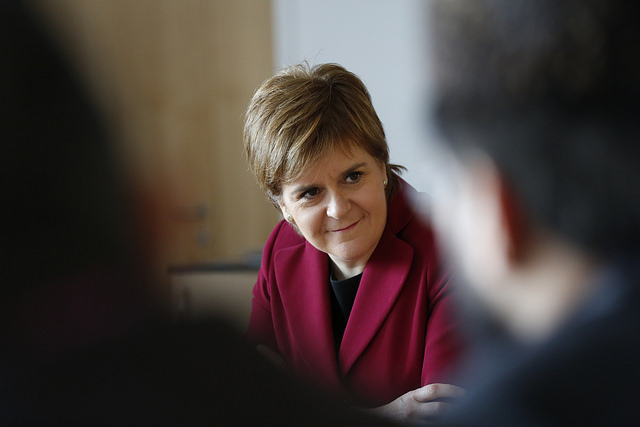 FIRST MINISTER NICOLA STURGEON will make an apology in parliament on behalf of the Scottish Government for historical discriminatory laws against sexual activity between men, to coincide with the publication of legislation which will grant an automatic pardon to those who were convicted.

The draft Sexual Offences (Pardons and Disregards) Bill, to be published on 7 November, will provide pardons relating to now legal activities for which people were convicted until as recently as 2001.

A Scottish Government spokesperson said: “The apology will be made on behalf of the Scottish Government for the treatment of homosexual men under previous governments and will coincide with the introduction of legislation to provide people convicted under these laws an automatic pardon.

“It is right that as a country we recognise – and apologise for – the appalling discrimination that gay and bisexual men faced.” SNP Equalities spokesperson Angela Crawley MP

“The Bill will right a historic wrong and give justice to those who found themselves unjustly criminalised simply because of who they loved.”

Crawley said: “It is right that as a country we recognise – and apologise for – the appalling discrimination that gay and bisexual men faced under historical homophobic laws that wrongly criminalised same-sex sexual activity.

“These shameful laws were a blight on our society – over decades and centuries they harmed and destroyed the lives of LGBTI people, including many indirectly affected by their legacy of prejudice.

“By apologising for the discriminatory treatment that gay and bisexual men faced, and by introducing this bill to provide automatic pardons to those convicted, the SNP Government is righting an injustice and it is taking Scotland another step towards full equality for LGBTI people.”

“The apology is important because it shows that it was the discriminatory laws that were wrong, and not the consensual relationships.” Tim Hopkins, Equality Network

Under these laws, men could be convicted for a number of different “offences”, including kissing another man in a public place.

Tim Hopkins, Director of the Equality Network, welcomed the news of the official apology and the imminent publication of the bill.

“The apology is important because it shows that it was the discriminatory laws that were wrong, and not the consensual relationships that were made criminal by those laws,” he said.

Hopkins added: “We look forward to seeing the detail of the bill. If it implements the policy announced by the Scottish Government, it will be a hugely important statement that Scotland regrets the discrimination of the past, and now considers its LGBTI people to be fully equal citizens who deserve equal respect.

“It will also be of direct practical importance to people who currently have one of these convictions show up on criminal record checks for jobs or volunteer posts.”

The bill, which was announced as part of the Scottish Government’s 2017-18 Programme for Government, is expected to deliver a formal pardon both posthumously and to those who are still alive. A similar bill was put forward by SNP MP John Nicholson at Westminster, however UK Justice Minister Sam Gyimah effectively fillibustered the bill, meaning it never went to a vote.

“If we’re serious about this, all political parties should start to show less patience with their own anti-equality voices.” Scottish Greens co-convener Patrick Harvie MSP

The UK Government has instead introduced its own pardon legislation, however it will only provide an automatic pardon to those who had died before 1 February, while those who are still alive must apply using a detailed application form.

It is also anticipated that the Scottish legislation could be more wide-reaching, as the pardons for England and Wales have been criticised as being too limited in their scope given that people were convicted for a range of different offences relating to homosexuality.

The Scottish Greens have also welcomed the First Minister’s announcement, and have called for further action to address discriminatory attitudes in politics and education.

Green co-convener Patrick Harvie said: “The legal exoneration of people convicted under unjust laws is long overdue and I’m pleased that the First Minister feels that it’s appropriate to make an apology on behalf of Scotland at the same time.

“If we’re serious about this, all political parties should start to show less patience with their own anti-equality voices, and stop selecting candidates who will stand in the way of progress.

“We must also work harder to ensure that schools monitor and tackle homophobic, biphobic, and transphobic bullying so that young LGBTI people growing up today never have to face the kind of oppression experienced by previous generations.”