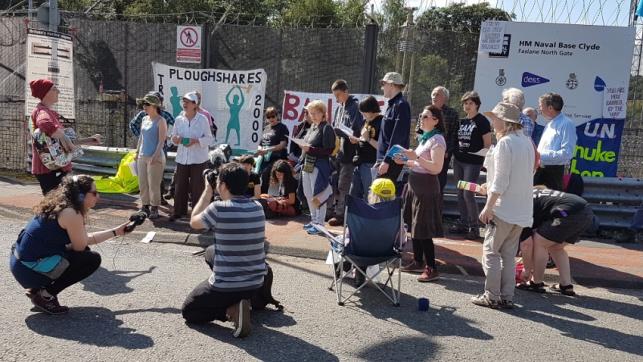 International protesters being held for court

FIVE anti-nuclear weapons campaigners have been arrested at Faslane naval base for protesting against the UK’s Trident weapons system, banned from September under international law.

The three men and two women are members of the Trident Ploughshares international camp at Faslane, and took action by blocking the road to the Coulport nuclear weapons depot.

Zelter said: “British nuclear weapons are illegal and now there is a United Nations ban treaty. It is imperative that all of us get involved in nonviolent nuclear disarmament as our government is engaged in state terrorism.”

Police Scotland confirmed to CommonSpace five individuals were arrested and are awaiting trial.

The blockade was part of a week of action by protesters to highlight the UN nuclear ban treaty which was established last week (7 July) in New York. The ban treaty had been the subject of intensive lobbying by Scots campaigners over several months, and was agreed by 122 nations but boycotted by an isolated UK and eight other nuclear armed states.

The international ban will come into effect in September, though the UK is not expected to respect the legally binding agreement.

Almudena Izquierdo, on behalf of 11 Spanish activists at the camp, said: “We demand our government, as part of NATO, sign and ratify the UN Nuclear Weapons Ban Treaty in order to prohibit nuclear weapons from entering foreign military bases and ports in Spain.”

Another group of Trident Ploughshares protesters were arrested in June 2016. The case of the Christian pacifists is currently under review in the High Court. The protestors, who were arrested for disrupting traffic Burghfield Atomic Weapons Establishment in June 2016, are appealing their actions were intended to enforce the law.