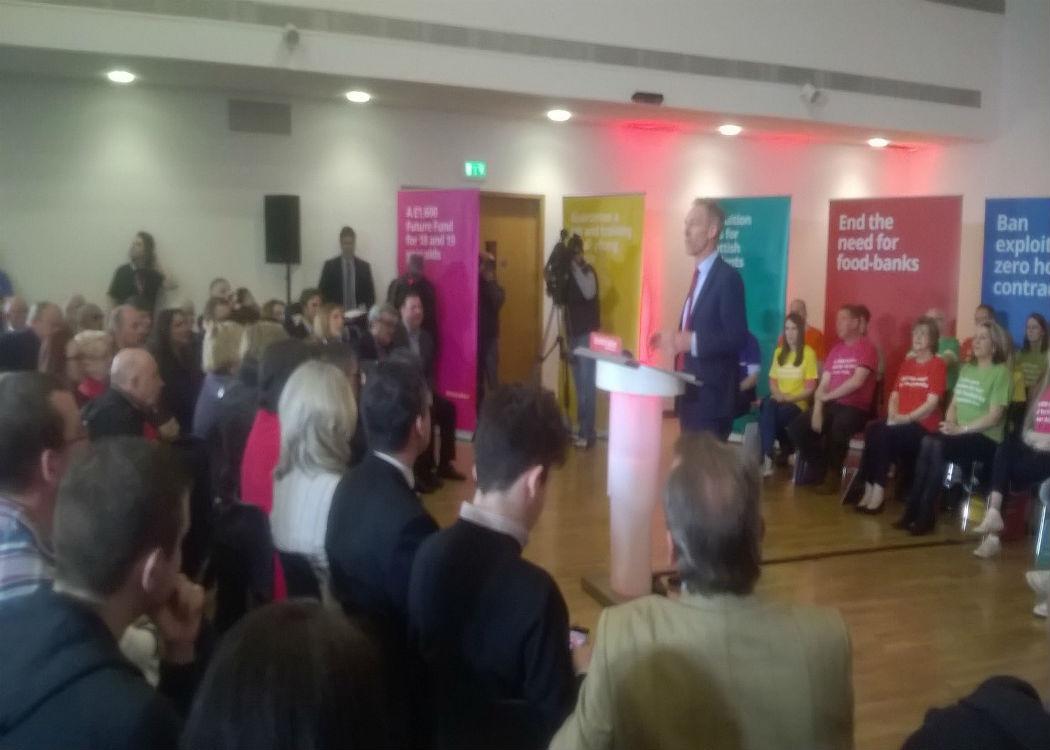 Ben Wray attended the launch of Labour’s Scottish manifesto for the General Election in Glasgow. He looks at the gap between what was said, what is written and reality.

LABOUR in Scotland launched the party’s Scottish manifesto on Friday in Tolcross leisure centre in Glasgow. Leader Jim Murphy, Glasgow East MP Margaret Curran and Derek Hamilton – who described Nicola Sturgeon as a “wee lassie” – addressed press and party diehards. Here’s what Murphy and the manifesto didn’t tell us about Labour’s plans for Scotland and the UK.

A manifesto that needs two Labour governments to come to fruition

The manifesto is not just for the General Election. It contains a myriad of policies for the Scottish Government election in 2016.

Much of what is proposed can only be achieved if Labour win two elections: the General Election in May, in which no poll has put them on course to win a majority, and the Scottish Elections next May, in which the SNP are streaks ahead of Jim Murphy’s party.

On devolved issues, the question of Westminster funding matters – for example Murphy’s policy of 1,000 nurses and 500 new GP’s relies on money from the mansion tax.

But, if Labour win in 2015 the money from the mansion tax would go to the SNP government to spend how it wishes, not to Murphy.

There are other policies, like employing 200 literacy teachers to work in communities, that is a 2016 election issues stuffed into the 2015 campaign so that Murphy appears in charge of both campaigns in Scotland.

Of course Labour would have to win this election and the next election with an outright majority to impliment its full manifesto.

Putting all of that together, the likelihood of this ever seeing the light of day in fully fledged form is next to nil.

More for the NHS (from the Mansion Tax, spent many times over)

The document makes the same bold claim that the UK Labour manifesto made: that everything has been costed and they know where the money is coming from.

But just about all the new spending appears to come from the mansion tax, which has already been spent many times over by the Labour party.

And that is all in Scotland alone, which will only receive less than 10 per cent of the total mansion tax funds. Welsh Labour have promised an extra 1000 nurses too. And of course, some of the mansion tax money needs to go to England – 85 per cent of the UK population – and Northern Ireland too. Many Labour politicians have also said that it will be used to help reduce the deficit. So this PS1.2bn stretches beyond all reasonable limits.

The tobacco levy would raise PS500m and the hedge funds tax reversal PS150m UK wide, which will add up to approximately PS65m for Scotland; still nowhere near enough for Murphy’s NHS outlay.

All of the NHS policies proposed by Murphy are laudable in their aims, but to make such a big fuss about being “the party of fiscal responsibility” that will “cut the deficit every year”, as Ed Miliband said when he launched Labour’s manifesto on Monday, doesn’t really stack up with Murphy’s promises.

In the dark over Scottish block grant cut

The other funding challenge for Labour is the Scottish block grant. Ed Balls confirmed that it will not be ring-fenced like education and the NHS, so Scotland will face cuts.

Murphy said at the press conference that the Barnett Formula, which decides the funding allocation for Scotland, will remain “today, tomorrow and forever”.

What he didn’t say is that very same formula will lead to a smaller budget in Scotland under Labour because of Balls’ and Miliband’s plans for “sensible spending cuts”.

More than one fifth of the Scottish block grant has been cut since the coalition government came to power. Nothing in the Scottish Labour manifesto makes it any clearer where the cuts will fall under a UK Labour government.

Jim Murphy received applause from the Labour faithful when he said “Mr Soutar, we are going to regulate the buses”, referring to Stagecoach owner and SNP funder Brian Soutar.

However, not a word of the policy can be found in the party’s manifesto.

A Labour spokesperson said that the policy meant “more control over fairs and over the routes; tighter and stricter regulation”. The spokesperson accepted it is not in the manifesto, but pointed to a bill currently lodged in parliament by former Scottish Labour leader Iain Gray on bus regulation, which would give local authorities greater powers.

On the railways, the manifesto states that a Scottish Labour government would use new powers from the Smith Agreement to create a “People’s ScotRail”.

The policy will: “Make sure profits from our railways are reinvested in better services and cheaper fares, not lining the pockets of shareholders.”

A mutual not-for-profit operator could take over the service, like the recent East Coast service prior to its privatisation last year. “People’s ScotRail” wouldn’t be publicly owned, but would be run in a way whereby the profits where returned to improving the service.

Trade unions were given a couple of mentions by Murphy today, at least in the abstract.

And that’s exactly what the STUC has not been very happy about. Grahame Smith, STUC President, recently claimed Murphy has so far had “nothing to say” about improving trade union rights.

However, Smith did praise the SNP for the Mather working together review and the subsequent fair work commission that is considering trade union cooperation beyond the employment law powers reserved to Westminster.

The STUC conference begins next Monday [20 April] where a so far unknown senior Labour politician will address it. To get the unions back on board with a party that appears increasingly less powerful in Scotland will be a tough task.