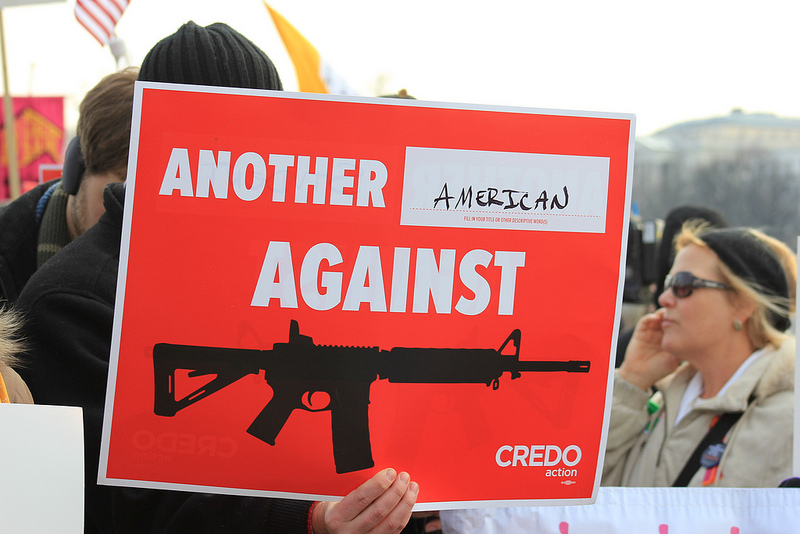 In a series of Tweets, school pupils caught up in the Florida school shooting have urged for gun controls

SEVENTEEN PEOPLE were killed in a mass-shooting in a school in Florida on Wednesday. In a series of tweets, some of those who survived have begun to call for tighter restrictions on guns in the United States.

In one Tweet, survivor Carly Novell, 17, revealed her ordeal as she hid in a cupboard to evade the gunman as her classmates were killed. Almost 70 years earlier in 1949, Novell said, her grandfather also sheltered in a cupboard while his entire family was murdered during one of America’s first mass shootings by a lone gunman.

“These events shouldn’t be repetitive. Something has to change.” Novell said simply.

This is my grandpa. When he was 12 years old, he hid in a closet while his family was murdered during the first mass shooting in America. Almost 70 years later, I also hid in a closet from a murderer. These events shouldn't be repetitive. Something has to change. #douglasstrong pic.twitter.com/nDctTNlUNs

Earlier, the Fox News presenter and pro-gun lobbyist Tomi Lahren tweeted to criticise “the Left” for pushing their “anti-gun and anti-gun owner agenda” as families grieved for the children they had lost: “My goodness. This isn’t about a gun it’s about another lunatic”, Lahren said.

Carly Novell responded to Lahren online, saying: “I was hiding in a closet for 2 hours. It was about guns. You weren’t there, you don’t know how it felt.

She added: “Guns give these disgusting people the ability to kill other human beings. This IS about guns and this is about all the people who had their life abruptly ended because of guns.”

I was hiding in a closet for 2 hours. It was about guns. You weren't there, you don't know how it felt. Guns give these disgusting people the ability to kill other human beings. This IS about guns and this is about all the people who had their life abruptly ended because of guns. https://t.co/XnzhvuN1zd

Speaking in response to the shooting, President Trump appeared to agree with commentators such as Lahren and rule out further restrictions, blaming the alleged attackers mental health rather than his access to deadly weapons: “We are committed to working with state and local leaders to help secure our schools and tackle the difficult issue of mental health.” Trump said.

“It was about guns. You weren’t there, you don’t know how it felt. “ Carly Novell, survivor

America was still deeply divided on the issue by Friday, but many have expressed anger at pro-gun lobby’s influence over politicians. The Guardian quotes the Center for Responsive Politics estimates that during the 2016 election, the National Rifle Association (NRA) spent a record $54m to secure Republican control of the White House and Congress, including at least $30.3m to help elect Donald Trump.

Following the shooting at Dunblane primary school in 1996 which saw 16 children and one teacher killed, the Conservative government, responding to public pressure, outlawed most handguns. In 1997, the Labour Government outlawed the remaining weapons, marking an end to private gun ownership in the UK.

In February 2017, Donald Trump signed an executive order which made it easier for some people with mental illnesses to buy guns. By removing the background checks, the NRA hailed the president as “one who respects and supports our right to keep and bear arms.”

Responding to the school shooting, Margaret Huang, Executive Director of Amnesty International USA, said: “While our thoughts are with the victims, survivors and families of this senseless attack, we know that is not enough.

“Our leaders must take action to protect people from gun violence. When people can’t go to school, or to work, or attend a concert without fearing that they’ll be shot, that is a human rights crisis.”

“The current patchwork of inconsistent gun laws is not sufficient to stop gun violence.

“We need reforms at the federal, state and local levels to protect everyone’s safety.”

Since the shooting, CBS News reports that the White House press office has refused to release pictures of Trump signing the order to the media.

Appearing in court, the alleged attacker admitted to the murder of 17 people in what is the deadliest US school shooting since 2012.