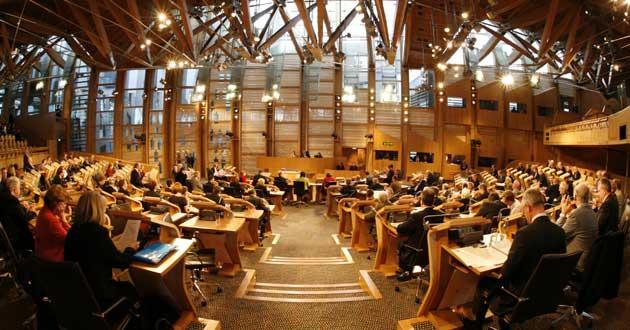 Following a series of confrontational questions from Leonard regarding the closure of 12 Bield care homes and the ongoing campaign to save their elderly and vulnerable residents from eviction, Leonard described the Scottish care sector as being in crisis.

Leonard went on to attribute the situation surrounding care in Scotland to cuts overseen by the Scottish Government, challenging Sturgeon to take responsibility, saying: “First Minister, your care policies are failing.”

Sturgeon responded that funding for Scotland’s National Care Home Contract had increased by 13 per cent over the past year, and defended the Scottish Government’s draft budget, presented by Finance Secretary Derek Mackay in December last year and currently under negotiation to secure approval from other parties in Holyrood.

On the subject of the budget, Sturgeon took the opportunity to attack Scottish Labour over its position on the Scottish budget, noting that Labour MSPs had voted with the Scottish Tories the previous day to defeat the Scottish Government on draft budget proposals.

During the 17 January debate, Scottish Labour finance spokesperson was unable to offer a solid articulation of Labour’s tax policy, saying: “We will publish our tax proposals ahead of the stage one debate.”

SNP MSP Ivan McKee responded: “As James Kelly fine well knows, the Budget goes through a formal process of scrutiny from committees and the parliament as a whole – where Labour have ample opportunity to bring forward their own costed plans.”

“Labour brought today’s debate to highlight concerns about the draft budget but failed to offer their own solutions. With only two weeks before the Stage One vote on the budget, it shows they are not serious about improving the budget.” Scottish Green co-convener Patrick Harvie

Harvie said subsequently: “Labour brought today’s debate to highlight concerns about the draft budget but failed to offer their own solutions. With only two weeks before the Stage One vote on the budget, it shows they are not serious about improving the budget and protecting public services. They are letting communities down with their posturing.”

Speaking at FMQs, Sturgeon contrasted the approach of Scottish Greens with that of Scottish Labour, inviting Richard Leonard to engage constructively with the budget process, “provided he can get a tax policy together”.

Sturgeon continued that with the possible exception of “one measly abstention”, there had not been a single example of Scottish Conservative MPs standing up for Scotland’s interests.

In likelihood, this is a reference to the actions of Scotland’s 13 Conservative MPs on January 16, who voted against a Labour amendment to the EU Withdrawal Bill that would have returned powers repatriated from the European Union to Scotland, rather than Westminster.

Sturgeon pressed this theme while responding to a question from SNP MSP Richard Lochhead on the possible impact of Brexit on the Scotch whisky industry. Referring to the Scottish Government’s recently published impact analysis of the consequences of Brexit, Sturgeon referred to the potential negative repercussions on the Scottish whisky industry as another example of how Brexit could harm Scotland’s economy.

To vociferous response from the SNP benches, Sturgeon recollected that, shortly after the 2016 EU referendum, Davidson challenged her to protect Scotland’s place in the European single market.

Now that this is the established position of the Scottish Government, Davidson’s criticism has fallen silent.