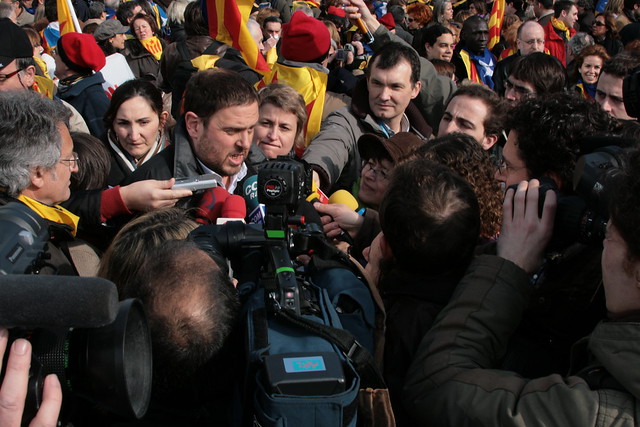 ORIOL JUNQUERAS, the imprisoned former Catalan vice-president, has argued that Spain’s 28 April elections are an opportunity for Catalonia’s independence movement to unite, and has warned Spain’s socialist prime minister Pedro Sanchez that the Catalan Republican Left (ERC) could once again be instrumental in toppling a Spanish government.

Junqueras, who will be standing as an ERC candidate in the upcoming elections despite having been imprisoned for over 500 days for his involvement in the 2017 Catalan independence referendum, will be delivering his first press conference by video on Good Friday, after finally receiving authorisation by Spain’s electoral commission. However, Spain’s Supreme Court yesterday rejected requests from imprisoned Catalan leaders Jordi Sànchez, Jordi Turull and Josep Rull to take part in campaign rallies while the trial is ongoing.

Nevertheless, Sànchez – the main candidate for the pro-independence Junts per Catalunya candidacy, today held a press conference hosted by the EFE press agency from the Soto del Real prison where he is jailed. It is the first such filmed event since the Catalan leaders were first incarcerated in 2017.

Ahead of this press conference, Junqueras outlined his position in a written interview with the Catalan newspaper El Nacional, calling for an end to disputes between Catalonia’s various pro-independence parties and emphasising the need for unity in the face of a possible guilty verdict in his ongoing Supreme Court trial.

Responding to the electoral commission’s approval of his participation in the campaign as head of the ERC list in the Spanish general election, Junqueras said: “It’s the first victory against the repression of this electoral campaign, because we’ll be able to break the silence they want us to submit us to, although we shouldn’t be giving thanks for things that should be normal in a democracy, such as the fact that a candidate can take part in an election campaign.

“They want us shut up, silenced and forgotten, but we won’t be, we are winning the battle of public opinion, in international terms too, because injustice is persistent and the truth is uncomfortable.”

Junqueras also argued that a strong ERC showing in the election could help break the Spanish Government’s refusal to engage in dialogue over a future referendum on Catalan independence, saying: “We’ve been decisive in the fall of two governments and we can be so again if they continue to refuse a democratic response.

“They want us shut up, silenced and forgotten, but we won’t be, we are winning the battle of public opinion, in international terms too, because injustice is persistent and the truth is uncomfortable.” Former Catalan vice president Oriol Junqueras

“The ERC vote in these elections is a ‘useful vote’ in a triple sense: it stands up to the extreme right and stop the right-wing tripartite; it prevents Ciudadanos (Cs) from being part of the government; and it makes possible a political solution that will lead us to the inevitable referendum.”

However, Junqueras warned the Catalan independence movement against setting “red lines” that could become “a blank cheque to facilitate a government of the tripartite of the extreme right, PP-Cs-Vox.”

Junqueras also accused Sanchez of being more willing to negotiate with forces of the Spanish right than he is to engage in negotiations with pro-independence parties: “Once again, the cowardice of the PSOE and the fear of the extreme right is causing Sanchez to renounce dialogue and stop defending democracy, as when they got up from the negotiating table before the elections were called. In any case, if Pedro Sánchez and the PSOE say they don’t intend to reach an agreement with ERC, it’s because they have already decided to reach one with Cs.”

Regarding the possibility of a guilty verdict against him and the 11 other pro-independence leaders currently on trial for their part in the 2017 referendum, Junqueras said that the response from the Catalan independence movement “will have to be political, from the country, like the response we made on October 3rd and, therefore, it must be coordinated among all Catalan democrats, because the sentence will be an attack not only on the people to be sentenced but also on democracy, freedom and fundamental rights. We’ll need a response from the country, that rises to the importance of the moment, and a strong government to confront one of the most important moments since October 2017.”

Meanwhile, speaking at his own press conference from prison, Jordi Sànchez has said that he “does not expect anything different than acquittal” in the trial’s verdict, and stated his belief that the Spanish Socialists could be won round to further negotiation on a future referendum.

Sànchez said:”One way or another, I’m sure the Socialists will accept our conditions [on the need for another independence referendum] and abide by its historic responsibility – the greatest in Spain’s recent history.

“How are conflicts sorted out if not by giving voice to the citizens?”

At present, the Council of Europe’s parliamentary assembly (Pace) is preparing a report on political prisoners in Spain and Turkey, after 20 of its members put forward a motion earlier this year expressed concern over the “growing number of national, regional and local politicians prosecuted for the statements made during the exercise of their mandate.”