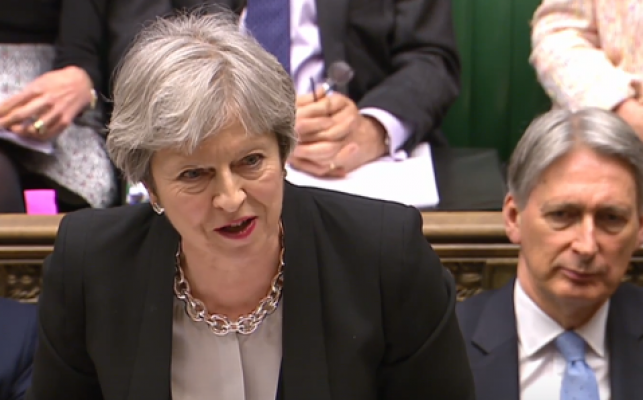 FORMER HEAD of the civil service Sir Bob Kerslake has said that Theresa May’s flagship ‘hostile environment’ immigration policy was regarded by some government ministers as “reminiscent of Nazi Germany”.

Kerslake was permanent secretary of the department for communities and local government when immigration legislation was being developed which enshrined then home secretary Theresa May’s vision of creating a “hostile environment” for undocumented migrants.

Speaking on Newsnight on Wednesday, Kerslake said that both Theresa May and Prime Minister David Cameron were told that it was a “challenging policy” and warned that there was a “risk that you take action against those who are actually lawfully here because we don’t have the information”.

As a result, Kerslake said the policy was “highly contested” among government ministers, adding: “There were some who saw it – I shan’t name them – as almost reminiscent of Nazi Germany in the way it’s working.”

The remarks have since been denied by environment secretary Michael Gove who said he had “never heard anyone make that comparison before Lord Kerslake”.

The comments come amid a growing scandal for the UK Government around the treatment of Commonwealth migrants who came to Britain as long as 70 years ago – the “Windrush generation” – who were told they had the right to remain in the UK but have faced challenges to their rights under new immigration laws due to a lack of documentation.

“There were some who saw it, I shan’t name them, as almost reminiscent of Nazi Germany in the way it’s working” – former head of the civil service @SirBobKerslake on the hostile environment policy #newsnight pic.twitter.com/eDVGYvAw8w

The government has apologised for the situation and set up a task force to address it, but pressure has continued as it emerged that landing cards for the Windrush migrants were destroyed by the UK Border Agency in 2010 – a decision which May sought to deflect onto Labour on Wednesday by saying the decision had been made in 2009.

The same day, May faced a further challenge over an announcement that the highly publicised case of Albert Thompson, who was told he would have to pay thousands for NHS cancer treatment despite living in the UK for 44 years, would now be resolved. Both Thomson and his lawyers claimed that they were not aware that his position had changed, casting doubt on May’s remarks.

The scandal is understood to be a by-product of the ‘hostile environment’, developed by May herself, which seeks to make life difficult for undocumented migrants by requiring evidence of the right to live in the UK when renting a flat, getting a job and accessing public services including the NHS, education, and the DWP.

Labour leader Jeremy Corbyn drew the connection to the government’s broader immigration policy at Prime Minister’s Questions, saying: “[The prime minister’s] pandering to bogus immigration targets led to a hostile environment for people who were contributing to our country.

“It led to British citizens being denied NHS treatment, losing their jobs, homes and pensions, thrown in detention centres like criminals and even deported.”

However, May defended the policy and said the impact on the Windrush generation should be seen as a separate issue.

“There is a difference between the Windrush generation, who are British, who are part of us and have a right to be here – and we want to ensure that we give them the reassurance of that right – and those other people who are here illegally,” she said.

Jamaican prime minister Andrew Holness and Labour MP David Lammy have called for the Commonwealth migrants who have been incorrectly denied access to services, detained or deported to be financially compensated.

Lammy, who has vehemently condemned both the current scandal and the wider ‘hostile environment’ policy, said May should “personally apologise to each individual who has been affected” by the errors.