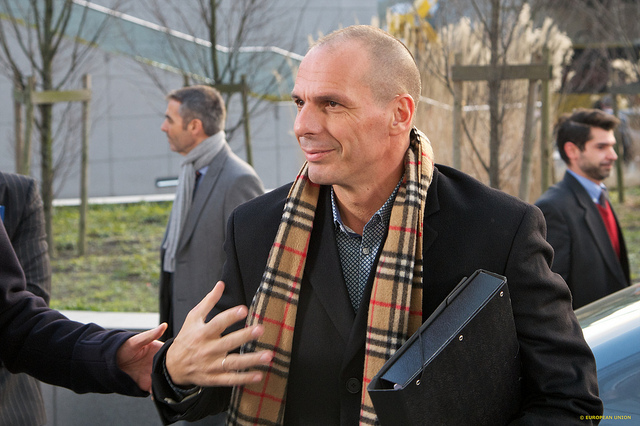 YANIS VAROUFAKIS, the former Greek minister of finance under the Syriza administration, has reiterated his support for an independent Scottish currency.

Varoufakis’s remarks, expressed on Twitter, followed a debate on possible currency options for an independent Scotland spurred by an article in the Herald newspaper by Common Weal head of policy Ben Wray, in which Wray argued against “sterlingisation”, or the unilateral adoption of the British pound without a formal agreement unifying the two nations’ respective institutions.

Following Wray’s assertion on Twitter that a new currency was the only “good” option for an independent Scotland, Varoufakis replied: “I think you are right. In fact, I argued the case (for a Scottish pound) in 2014”, before linking to an article in which Varoufakis argued that Scotland should decouple from sterling once independent.

In his his Herald article, Wray argued that, in the event of post-independence sterlingsation: “There is no lender of last resort facility and monetary policy would be set by the Bank of England without input from Scotland. A central bank isn’t just an afterthought. Its ability to set base interest rates and create money act as a safety valve, giving financial markets trust in the value of the national currency and, therefore, the national economy.

“Without it, a sterlingised Scotland would have to take extra measures to reassure financial markets. This would probably lead to a tightening of fiscal policy by reducing public spending or raising taxes. For supporters, this ‘discipline’ is a good thing. But it would be incompatible with the Scottish Government’s commitment to end austerity and reduce inequality.”

Writing in 2014, Varoufakis made a similar argument, arguing that a shared currency with the Bank of England would tie the Scottish economy to a system designed to benefit the City of London, which would hinder Scottish economic growth and risk insolvency.

Varoufakis also highlighted the existence of Scottish banknotes as a reason why the transition to a Scottish pound could be relatively straightforward, limiting the possibility of a run on the banks, as well as Scotland’s relatively low public debt, which could allow the new currency to be supported by an underlying financial security.

In his assessment of alternative options, Varoufakis wrote: “I can think of no better ‘strategy’ than the SNP’s commitment to sterling if its aim is to lose the referendum and to alienate those Scots who want to vote with pride for an independent Scotland that seeks a path radically different to the one England embarked upon in 1979.”

In 2015, during a public conversation with the journalist Paul Mason, Varoufakis said that he would support an independent Scotland “in the context of a united Europe”. However, writing earlier in an article entitled ‘Scotland must be braver’, Varoufakis wrote: “A ‘minimalist’ Independence, of the sort proposed by the Scottish government’s White Paper, will fail either to inspire the Scottish people to vote in favour of Independence or to deliver genuine independence if the referendum is won. Scotland must bite the bullet and fearlessly seek to establish its own currency.”

The Scottish Government’s Growth Commission, which is expected to present its findings within the next few weeks, is reportedly assessing the viability of an independent currency, but is widely expected to propose some form of sterlingisation – possibly as a temporary measure – in the event of independence.