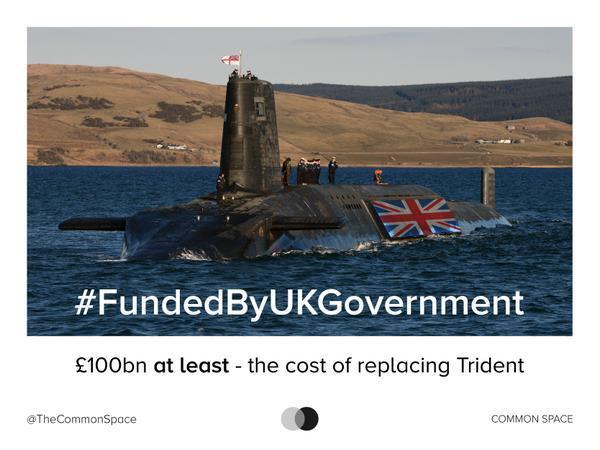 ANOTHER generation of Trident nuclear missile submarines is unlikely to be agreed in 2016, according to former Labour defence secretary Des Browne.

The crucial ‘main gate’ decision on whether to keep nuclear weapons is scheduled for 2016, when spending billions on a new nuclear fleet requires the approval of the UK parliament.

However, the pressure on military spending is expected to intensify after May’s election – with deep cuts to the army raising the prospect of a further delay to the trident project.

Browne, who now sits in the house of Lords, told The Guardian that “this 2016 deadline is artificial”.

He continued: “My bet is that the incoming government, when faced with the stark financial reality of the spending necessary in times of continued austerity, will reach for a review to find an affordable alternative and will get the experts to support a further extension.”

With health, education and international aid protected areas of spending, a Labour or Tory led government committed to meet austerity targets would be required to make multi-billion cuts to the military.

Trident renewal – which campaigners estimate would cost PS100bn over its lifetime – would increase the likelihood that the UK will “significantly scale back on the number of some aircraft and naval platforms”, according to analysis by the European Leadership Network. (Click here to read more).

The number of military personnel is also likely to be cut by a further 30,000, according to Malcolm Chalmers of the Royal United Service Institute (RUSI). (Click here to read more).

The number of British soldiers could fall to levels as low as 50,000, according to the RUSI.

Sir Menzies Campbell, former Liberal Democrat leader, echoed Browne’s comments to The Guardian: “I am equally sure that within a week of the election being over, whoever is secretary of state for defence will instigate a further review of Trident and its impact upon the overall budget.”

Uncertainty surrounding the renewal of nuclear submarines is a further blow to confidence in the value of the Trident project.

Labour leader Ed Miliband has stated that he supports a “least-cost deterrent”, opening up a possible deal with the Scottish National Party in a hung parliament.

An SNP spokesperson told CommonSpace: “This indicates a growing revolt amongst the backbenches over Trident. The SNP would never vote to waste over a hundred billion on new nuclear weapons – and Nicola Sturgeon has made clear that Trident is a red line issue for the SNP.”