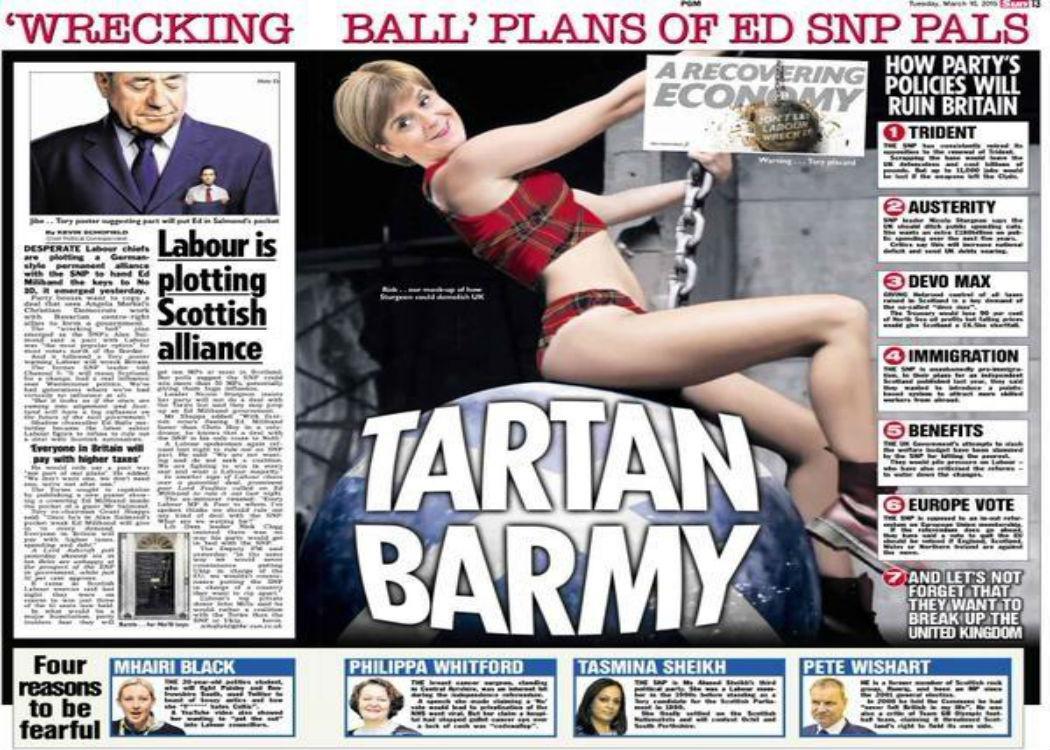 CommonSpace columnist Fraser Stewart says recent sensationalist tabloid press coverage of matters SNP don’t tell us anything new about the standards of some titles, but asks why people keep giving in regardless

THIS WEEK has been nothing short of a machine-gunning for the general public at the meat-hooks of the tabloid press. Between photos of Nicola Sturgeon demolishing the country to, well, illustrations of Nicola Sturgeon’s cleavage, it’s safe to say the agenda is clear; no SNP, not now, not ever.

The latest blow, however, came after the SNP councillors responsible for burning a copy of the Smith Commission – and filming it for the world to see – were reinstated this week (click here to see the Daily Record’s coverage) .

We can’t dispute their stupidity. Not only is it stupid, but it’s painfully embarrassing. The only thing that could’ve made it more cringeworthy is if they’d somehow incorporated a rap into it, but, overall, it carried the air of school kids not knowing any better.

Certainly not an ‘extremist fringe’, as one tabloid so casually put it. To portray an act as minor and idiotic as this as being ‘extremist’ – that is, in the same bracket as terrorists and xenophobes – is entirely irresponsible and the rankest kind of sensationalism.

The only thing that could’ve made burning the Smith Commission more cringeworthy is if they’d somehow incorporated a rap into it.

And this is where the real issue lies: sensationalism – the art of selling papers with a contemptible disregard for moral decency.

Nobody could argue that the tabloids have ever served as a cornerstone of societal virtue; one only has to recall the demise of the News of the World for evidence. You could be forgiven for thinking that the fate rightfully met by the NOTW would provide a foreboding to the others – come out of the gutter or drown in your own sewage.

One of the reasons that it hasn’t is simple – we keep giving in. We, as a society, have allowed this non-reporting to drag us into the sewers with it. We have allowed our energies to be siphoned by extremism, sexism, racism, scaremongering and playground gossip, when we should have been engaging them in the betterment of society.

We, as a society, have allowed this non-reporting to drag us into the sewers with it.

In the last week alone we’ve had to endure two graphics in tabloid newspapers completely dehumanising Scotland’s most senior politician, and how did we react? With appropriate disdain: but by acknowledging it we have dignified it, and by dignifying it we become implicit.

Of course, we are not solely responsible. Those who buy the publications are allowing themselves to be coerced into believing that this is the only kind of media for them – low-brow, gossip-based, unintelligent and patronising. Economics, Jim? Social justice? Don’t be daft, here’s a smashing pair of tits instead.

How little the tabloids must think of their readership. Sensational journalism, as with negative politics, is insulting to the point of bemusement.

Editors believe two things: that their readers are troglodytes of the most primitive kind; and that all men are sexists.

Readers are faced with page three at the first turn, with drawings of the cleavage of Scotland’s First Minister and inflammatory, provocative headlines because editors believe two things: that their readers are troglodytes of the most primitive kind; and that all men are sexists.

By playing up to this offensive misconception, tabloid editors are shamefully promulgating a cycle of sexism that, one day, wider society will come to realise is largely their fault. Sexism, racism, blaming of the poor – each of these fuelled and exploited by a shameless and morally defunct media.

It stems from an innate desire to provoke. To set the agenda and tell us who we like today and who’s life we should ruin tomorrow. It’s sado-masochistic, really. The God Complex of a seedy and underhand institution.