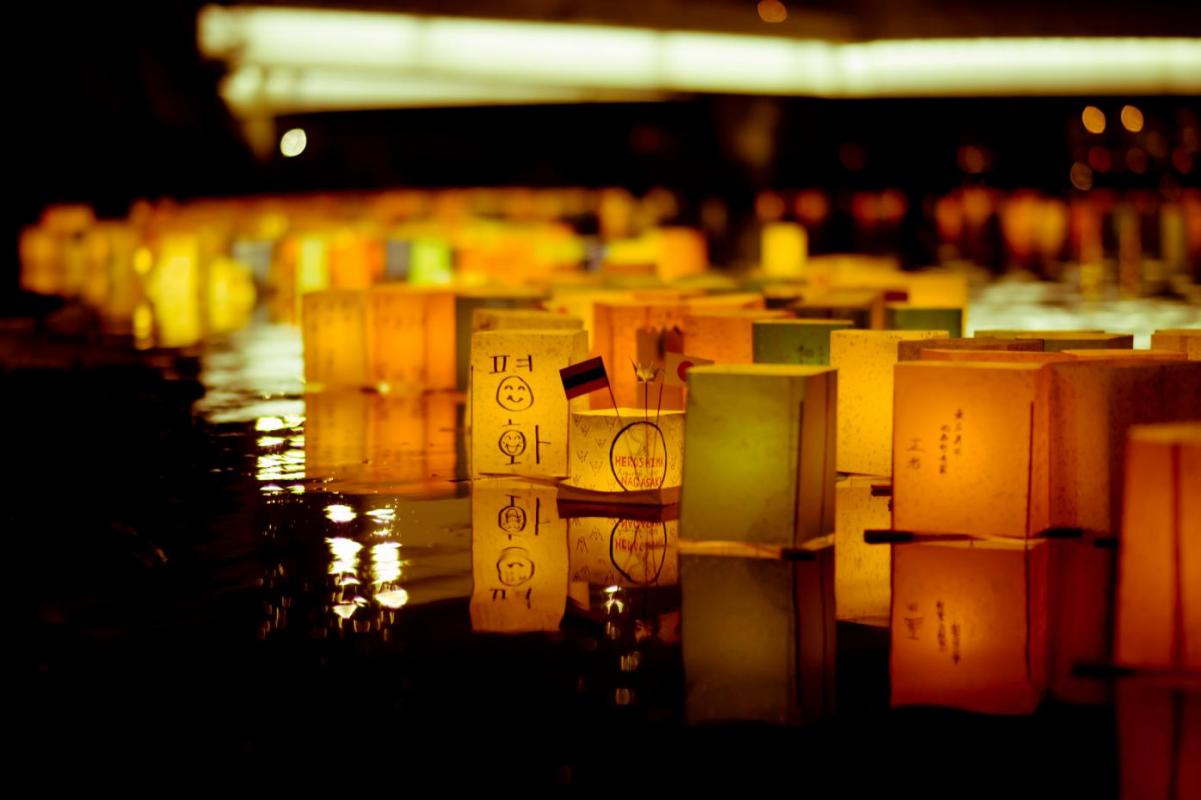 CommonSpace columnist Fraser Stewart reflects on the the history of nuclear weapons, the ever-changing militaristic landscape and poverty and inequality in contemporary society

“THE HEAT was tremendous – it felt like my body was burning all over,” writes Japanese octogenarian, Akihiro Takahashi. ” I found my great uncle and great aunt, that was quite a coincidence. We have a proverb about meeting Buddha in hell. My encounter with my relatives was just like that. They seem to be the Buddha to me wandering in the living hell.”

At 8:15am local time, August 6 th , 1945, a celestial light engulfed the city of Hiroshima. An American B-92 had just dropped ‘Little Boy’ – the atomic bomb that would claim the lives of 80,000 innocent civilians on that day. As the mushroom cloud climbed skyward, Hiroshima was razed to the ground.

Akihiro was only 14 years old at the time, and talks of the devastation he witnessed in the immediate aftermath of one of humankind’s greatest acts of evil.

“I ran into a friend of mine” he says, “Tokijuru Hatta. I wondered why the soles of his feet were badly burnt. It was unthinkable to get burnt there. But it was undeniable fact – the soles were peeling and red muscle was exposed.”

“Many people on the street were killed almost instantly. The fingertips of those dead bodies caught fire and the fire gradually spread over their entire bodies from their fingers. A light gray liquid dripped down their hands, scorching their fingers. I was so shocked to know that fingers and bodies could be burned and deformed like that.”

Seventy years on, our international militaristic landscapes have altered drastically, but not in the way they should have

These bombings represent some of the worst man-made atrocities in human history. President Truman, in a speech after the massacre of Hiroshima, asserted that the city was targeted as a military base, and that the American army wished to “avoid, insofar as possible, the killing of civilians.” Yet tens of thousands perished – as did tens of thousands more in Nagasaki, only three days later. The second attack cannot be justified. Neither can be forgiven.

Seventy years on, our international militaristic landscapes have altered drastically, but not in the way they should have. Instead of learning from the barbarisms committed in Hiroshima and Nagasaki, we have built weapons of such destructive potentiality that those used in 1945 look like spud guns in comparison.

Instead of destroying all remnants of weaponized nuclear technology, as should have been our basic moral and human obligation given the horrendous effects thereof, we have pushed relentlessly to make them bigger, more wasteful and as ungodly as possible. As if killing 80,000 with one missile wasn’t ruinous enough.

Of course, many still hide behind tired arguments of “deterrence” and “necessary evil”, but that is a very narrow and melodramatic scope. Nuclear weapons are the most detrimental creation to humankind, ever. They are morally indefensible, and their reality quite stark: more people suffer now because of nuclear weaponry than ever before, without the launching of a single warhead in seventy years.

Take America for example. Approximately 50 million Americans live below the poverty line , yet, in 2011 alone, the United States spent $61.3 billion dollars on nuclear weapons development. In that same year, Russia spent $14.8 billion dollars, despite having a poverty rate of 15.9%. 50% of Indian citizens don’t have proper shelter ; a further 70% don’t have access to decent toilets. Yet all have functional nuclear armories, parasitically draining funds from the pockets of the most vulnerable people in society.

They are morally indefensible, and their reality quite stark: more people suffer now because of nuclear weaponry than ever before, without the launching of a single warhead in seventy years

This is the sordid egotism of man. Leaders of the major powers of the world have, since exterminating the populations of Hiroshima and Nagasaki like roaches, endeavoured to completely part ways with any semblance of altruism and compassion, for the sake of something allegedly designed to keep peace. Weapons, for peace – the political equivalent of eating cake to lose weight. Not only is the premise utterly idiotic, the barefaced hypocrisy of it is beyond contempt.

We build warheads with the capacity to flatten entire cities, to protect our citizens from harm (go figure). But poverty and inequality is harm. Destitution and squalor is harm. By diverting money away from the homes of our families and children into these cenotaphs of global mistrust, our leaders have become oblivious to the true fears of those who are at immediate risk in the world: fears of suffering, of not being able to provide for their children; of homelessness, of malnutrition, of physical and mental illness; of having to endure the societal persecution that comes with being poor.

Government’s ignore the daily anguishes of their own people (even more so the plights of those elsewhere in the world), going so far as to plunge many further into the poverty trap, so that they we are protected from foreign spectres. But I ask you: who is there to defend us against the fetishes of our own leaders? We shouldn’t be looking at other nations with suspicion. We should be looking at the hypocrisies of pro-nuclear administrations the world over with disdain, for thinking that threatening the recreation of Hiroshima or Nagasaki helps anyone, anywhere in any way.

Seventy years ago, mankind committed an atrocious crime against itself. Seventy years on, the symbols are everywhere: the bomb is still supreme. The bomb still has the capacity to devastate millions, without ever being detonated.

I liked Akihiro’s proverb about meeting Buddha in hell, it says a lot about the immediate impact of the bomb then. It made me rack my brains to think of a similarly concise aphorism that could sum up the reality of the bomb now. Only one came to mind.

” We need our nuclear weapons. To protect our food banks.”