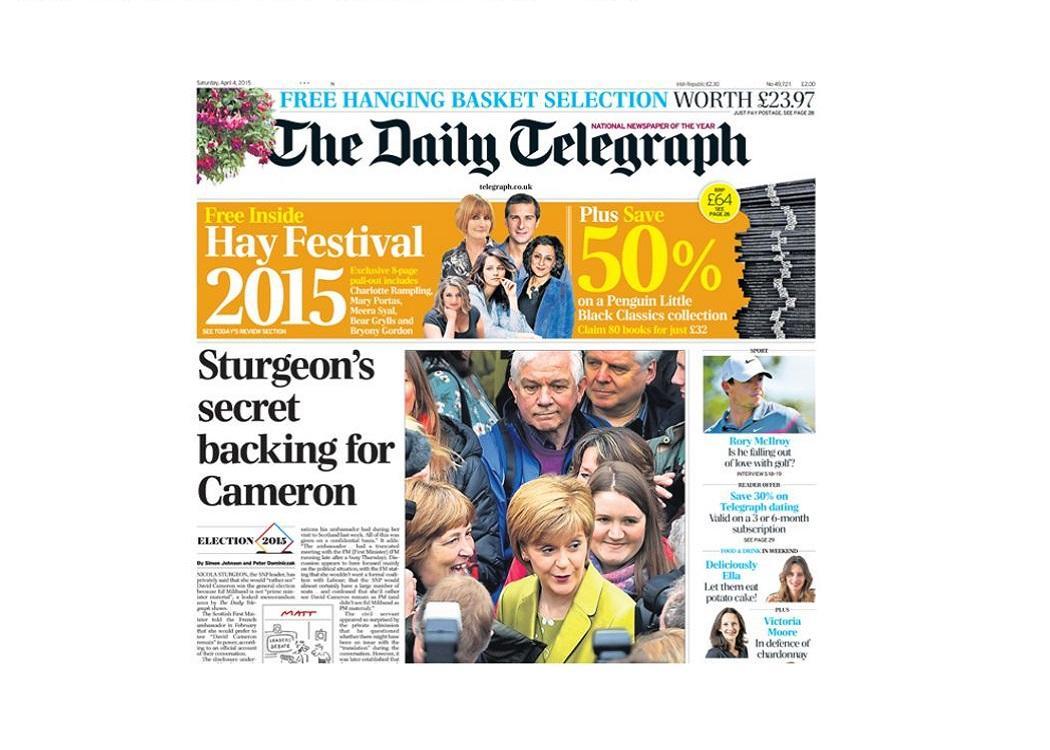 NICOLA STURGEON has very quickly become the MVP of British politics. After a solid showing in the leaders’ debate, Sturgeon’s profile skyrocketed faster than a Severin Carrell phone call to the French Ambassador.

Of course, with great admiration comes great detraction. Less than 24 hours after teaching the Eton boys a lesson in the art of debating, Sturgeon found herself on the front page of the Telegraph – the subject of a ‘damning’ memo that, well, didn’t really damn anything.

Perhaps even more perplexing was the Daily Mail, which labelled the SNP leader ‘the most dangerous woman in politics’ – as if that were a bad thing. Read between the hysteria, however, and the real headline becomes obvious – ‘strong, left-wing woman has audacity to challenge the status quo’.

The transparency was in the timing. Smearing an increasingly prominent lefty from north of the wall? I’m surprised they took so long.

Read between the hysteria and the real headline becomes obvious – ‘strong, left-wing woman has audacity to challenge the status quo’.

What it did reveal, then, was far more fundamental. The memo circus (and subsequent fall-out) has provided us with a warts-and-all exploration of our political continuum, and taught us that spectral differences in this country have in many ways transcended left and right entirely.

Our leanings now boast a far greater jurisdiction – a more ideological partisanship, encompassing not just policy, but attitude. Arguments of economics and welfare serve as mere accents to the chromatics of optimism and pessimism that underpin the wider debate.

It speaks volumes that, as some marched through Glasgow impassioned against nuclear weapons, others waded frantically through sewage in the hope of finding something that would stick.

Of course, a traditional left-right scale would be much easier to discern without Labour playing pendulum between the two. Zoe Williams summated the memo debacle expertly, concluding with the essence of what might be the most important question New Labour has ever been asked – do you really want an end to austerity, or are you simply saying what Labour is supposed to say?

Can we expect Labour to seriously consider a new economic landscape any time soon? Not according to Ed Balls. Cuts, cuts and more cuts – it’s the only way. Our spectrum isn’t as simple as ‘Labour left, Tory right’ anymore. Modern political identity is thus evolving into an entirely redefined dichotomy: the realists on one side, the radicals on the other.

Where realists ‘understand’ how society works, radicals are prepared to change it. That’s the crucial distinction. The trouble with realism, however, is that it is inherently unambitious, frustratingly unchanging and thoroughly unappealing.

Insipid archaisms are half-heartedly reheated as ‘sensible policy’ and pushed at us like prison meals by a largely conservative media and government, while progressive ideas are torpedoed as daydreams and their architects smeared as socialist daydreamers.

Realpolitik – the inhibiting of ambition in favour of a derelict status quo. It is the most obvious and tired critique levelled at the progressive left: the idea that radical thinkers are nothing more than a gaggle of Bohemian liberals with no concept of how the world works.

Do the Greens not understand politics because they want to preserve our environment? Does Scotland not understand war because we want to rid ourselves of nuclear weapons?

The more the realist press gears up the witch-hunt against the first minister and her band of hippie separatists, the more it becomes exceedingly clear – the ‘radical’ contagion is spreading.

Nicola Sturgeon is ‘dangerous’, then, because she embodies the true progressive message, and it’s not about socio-democratic utopianism; it’s about real people pushing for real alternatives to dysfunctional and dystopian politics – the progressive versus the primitive.

The more the realist press gears up the witch-hunt against the first minister and her band of hippie separatists, the more it becomes exceedingly clear – the ‘radical’ contagion is spreading.

While the realists tweet about it from a quarantine chamber, the rest of us are basking in the healthy glow of democracy.