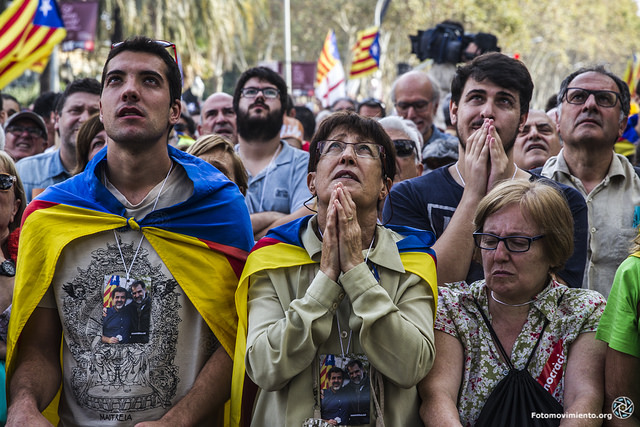 AN EVENT HIGHLIGHTING the situation in Catalonia, organising solidarity and calling for the release of Catalan political prisoners jailed by the Spanish state since the 1 October referendum will be held at Renfield St Stephens Centre in Glasgow this Sunday.

The meeting has been organised by the Catalan National Assembly (Scotland) and will hear from David Karvala, who is from Barcelona and is one of the promoters of the international solidarity initiative #WithCatalonia.

With Catalonia has created an interactive map which allows users to identify whether there is a solidarity committee in their area and promotes solidarity activities around the world.

Also speaking at the event will be a local representative of the Catalan National Assembly, Stuart Graham from Glasgow City Unison, and Commonspace editor and Sunday Herald columnist Angela Haggerty.

Speaking ahead of the event, Angela Haggerty said: “Scotland has a real affinity with Catalonia and many campaigners and activists here have been monitoring events there closely. Given that both have strong independence movements, it’s really important for us to keep watching developments and to support those standing up for democracy.

“No matter what side of the independence questions people are on, it’s vital that democracy is protected, and people are afforded the right to vote. It’s dangerous to do otherwise, and entirely counterproductive.

“But in addition, the situation in Catalonia throws up some specific questions for us in Scotland about the EU, and the kind of relationship we should have with it. This could prove to be tricky territory for the SNP, and I’m looking forward to Sunday’s event to hear more views on how people think Scotland should move forward.”

Next Sunday, at 2:30pm, we are having this great event in St Stephens! Come along to create solidarity and defend democracy! pic.twitter.com/tHIxcjAPKn

The event is free to attend and will provide an opportunity for attendees to discuss ways to organise solidarity with political prisoners.

The Catalan Defence Committee Scotland was launched in October this year in an effort to coordinate and maximise Scotland’s solidarity efforts.