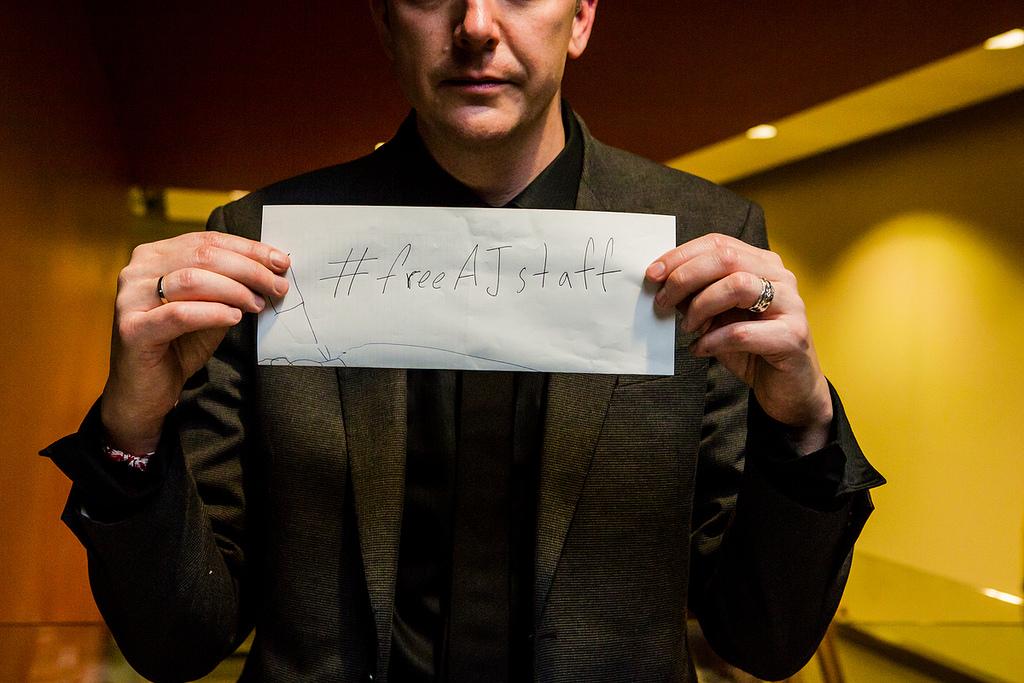 Hopes for release of a second Al-Jazeera journalist from Cairo prison after Greste’s release and deportation, but doubts remain over future of third journalist who is an Egyptian citizen

PETER Grest, the Al-Jazeera journalist released from prison in Egypt on Sunday, has said he “won’t give up” on his two colleagues who remain behind bars in Cairo.

Peter Greste, who was imprisoned for over a year by the Egyptian Government on accusations of collaboration with the banned Muslim Brotherhood, was released on 1 February and deported. He was sent to Cyprus before his planned return to his native Australia.

Greste was one of the ‘Al Jazeera three’, along with Mohamed Fahmy and Baher Mohamed who were jailed by President Abdul Fattah Al-Sisi’s regime in December 2013, with worldwide protests from journalists and freedom of speech campaigners for their release under the hashtag #freeAJstaff.

All the defendants denied the charges against them, and called the trial a “sham”.

It is hoped that Fahmy, who holds dual Egyptian-Canadian citizenship, will be deported to Canada soon, but uncertainty remains over the future of Mohamed, an Al Jazeera producer, who is an Egyptian citizen.

The Al-Jazeera media network said the campaign would continue until all three were released and exonerated of the charges, and Peter Greste’s brother, Andrew, said on Monday at a news conference in Brisbane that Peter “won’t give up until Baher and Mohamed are out of there”.

“Straight up he’s not going to forget his two other colleagues. There’s no doubt that his excitement is tempered and and restrained and will be restrained until those guys are free,” Andrew Greste stated.

Mostefa Souag, acting director general of the Al-Jazeera media network, stated: “We’re pleased for Peter and his family that they are to be reunited. It has been an incredible and unjustifiable ordeal for them, and they have coped with incredible dignity.

“Peter’s integrity is not just intact, but has been further enhanced by the fortitude and sacrifice he has shown for his profession of informing the public.

“We will not rest until Baher and Mohamed also regain their freedom. The Egyptian authorities have it in their power to finish this properly today, and that is exactly what they must do.”

Amnesty International, which has campaigned to free the Al-Jazeera three, said it was important Greste’s release did not “overshadow” the plight of Fahmy and Mohamed.

“The news that Peter Greste will finally be allowed to leave Egypt after more than a year in prison comes as a welcome relief, but nothing can make up for his ordeal,” Hassiba Hadj Sahraoui, Amnesty International’s deputy director for the Middle East and North Africa, stated.

“It is vital that in the celebratory fanfare surrounding his deportation the world does not forget the continuing ordeal of Baher Mohamed and Mohamed Fahmy who remain behind bars at Tora prison in Cairo.”

The three men were initially convicted by the Egyptian High Court, but that decision was overturned on 1 January on procedural grounds. They were kept in detention pending a re-trial, but Greste and Fahmy sought deportation under a new Egyptian government law allowing foreign nationals to be deported and face trial in their home country, if in “the highest interests of the state”.

A letter from Peter Greste before his release gave shocking details of the treatment of Fahmy and Mohamed in prison: “Fahmy and Baher have been accused of being Muslim Brotherood members, so they are being held in the far more draconian ‘Scorpion prison’ built for convicted terrorists,” Greste wrote.

“Fahmy has been denied the hospital treatment he badly needs for a shoulder injury before our arrest. Both men spend 24 hours a day in their mosquito-infested cells, sleeping on the floors with no books or writing materials to break the soul-destroying tedium.”