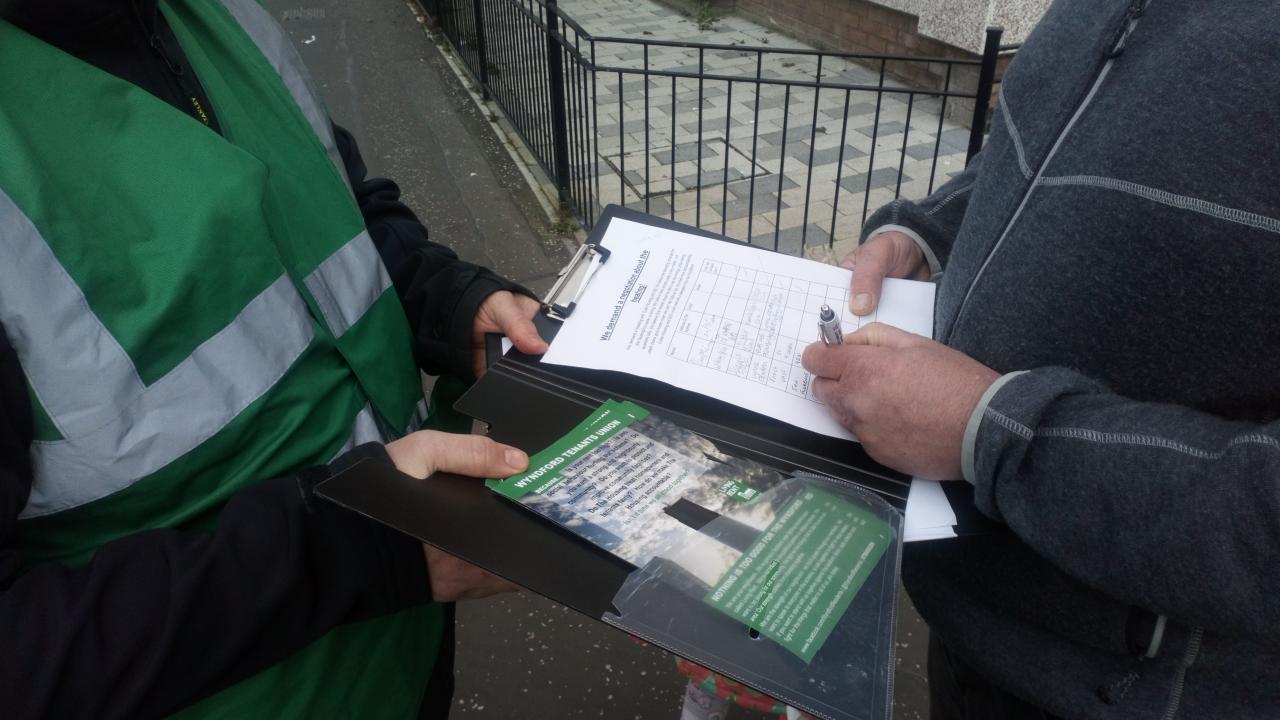 A resident of the Wyndford estate in Glasgow, Scott Carroll was cut off from central heating over the winter after a spell in hospital with pneumonia – but he’s now finding his feet with the tenants’ union

LAST month, Scott Carroll had to walk home in the rain from hospital with pneumonia, with no money for public transport.

When he got home to his flat in the Wyndford estate in Maryhill, he applied to the council for a crisis grant to get the heating turned back on.

Told it would take three days to process this request and directed to homeless accommodation, he finally broke down.

This was the culmination of a hard few months for Scott. Living with both physical and mental health problems while unemployed was trial enough before a letter reached his flat at the start of winter.

Speaking to CommonSpace, he says: “I got a bill in, £1800. I can’t pay that. I phoned them up, wasted an hour just getting moved from pillar to post.

“Since September, I’ve had no heating right through the winter. I’ve got a lung condition, suffer mental health problems and I’m unemployed.

“It had a detrimental effect on my mental health, having no heating.”

“I’ve got a diagnosis for emphysema. It can’t be cured but it can be treated. I’m on all sorts of medication, inhalers and the rest; I’m like Boots the chemists.”

Scott, who moved to the Wyndford flat in 2013 after the death of his mother, had used his own resourcefulness to get by.

“I got started at a gym, I washed at the gym and kept healthy and fit.”

But these efforts couldn’t protect him from deteriorating health. In the freezing nights, he slept with two jumpers on and in a sleeping bag. It was that morning his lungs failed him, and he was taken to hospital.

“I woke up and I couldn’t breathe. They took me to hospital. I had a slight touch of pneumonia.”

Combined with the emphysema, Scott summed up his situation as “no looking to good for me”.

“But I’m a survivor,” he repeated.

Today Scott is in better morale.

His financial position is less desperate, but he has also found new purpose, campaigning with the tenants’ union in his estate, against the conditions he has faced and he knows so many others have in the climate of austerity across Scotland.

“People are dying from underlying health problems and coldness, hypothermia,” he says.

Scott’s story is just one to emerge during the campaigning work of tenants’ union activists in the Wyndford estate in recent weeks.

The union is organising against the impact of changes in the Wyndford District Heating System (WDHS) introduced in 2012, and today serves around 1800 of the Wyndfords 1900 households. The union says key meters for heating were phased-out in December 2018 and that many residents are now receiving their new quarterly bills.

Anger is focussing on the payments, which some residents feel is too high. The standing charge for heating is 44p per day, but SSE, the energy company in charge of the WDHS scheme, has recently announced it will rise to 48p per day.

Nick Durie, a member of the Wyndford Tenants Union (WTU) – which was previously the Wyndford residents association before joining forces earlier this year with Living Rent, Scotland’s tenants union – told CommonSpace: “It’s a burning hot issue in the scheme and we’ve been doing a lot of door chapping about it.” 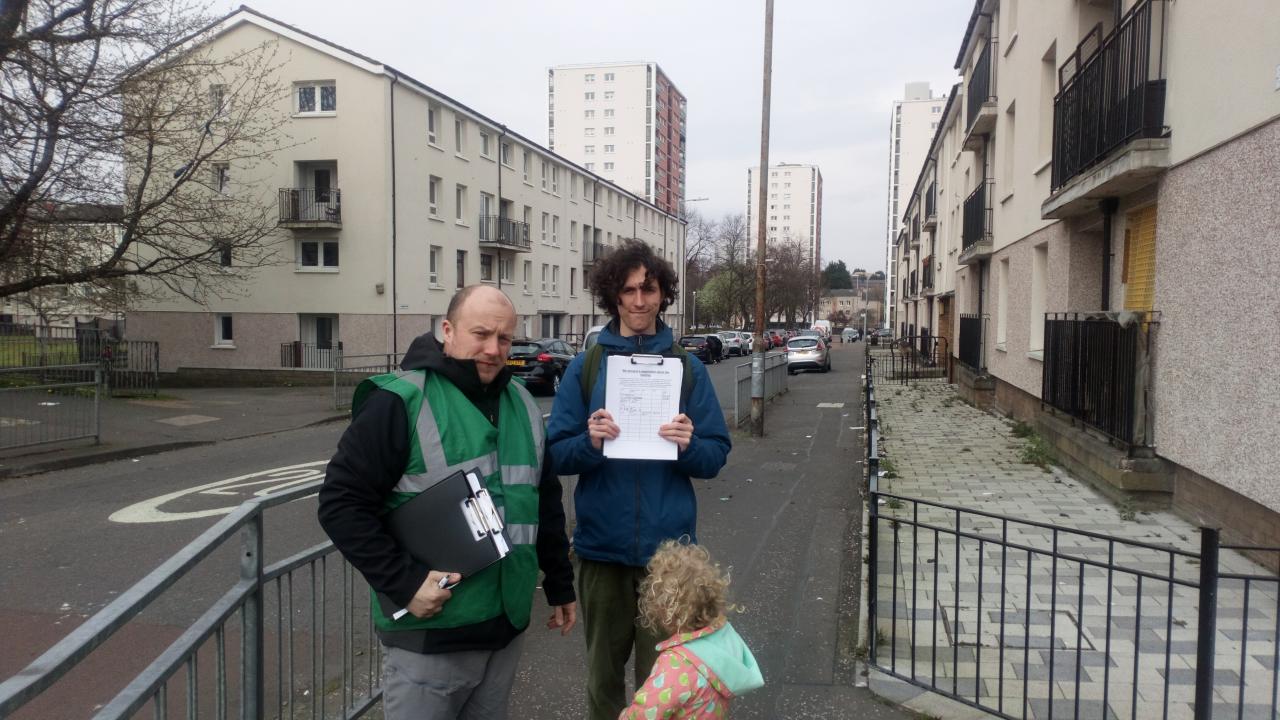 In addition to organising a petition against the standing charge, WTU has held a surgery for tenants and a strategy meeting at which Scott helped devise the idea of a video bringing together people in the community to discuss the problems with the heating scheme.

Durie said their doorknockers had already met another five tenants disconnected, and more with huge debts, and widespread confusion as to how such large debts have been amassed.

The union already has successes under its belt. In 2013 its predecessor organisation won a low user tariff, so that some lower income tenants would pay no standing charge.

Today they are demanding an end to the standing charge, accountability from the housing association and energy company and the right to return key meters for residents who want them.

They are also demanding Scott’s debts be cleared and for his flat to be placed on the low user tariff.

Scott says that he feels more empowered now that he is active in the union.

“My mental health is a bit brighter, it doesn’t just happen overnight.

“I don’t know if it’s luck or fate that brought us together. I feel as if my Mum’s looking down on me. I thank God for this day.”

CommonSpace asked SSE about Scott’s case. They responded: “We would urge any customer facing difficulty with their heating bills to contact us as soon as possible and we can help.  We would never disconnect a customer who had been in contact with us to say they were struggling with a bill and making attempts to contribute to a debt repayment plan.

“Customers, or anyone concerned for a friend or family member with any vulnerabilities, should make this known to Cube Housing Association and/or us and we can ensure they are supported.

“Like other businesses, we’ve seen a sustained increase in inflation.  Raising the standing charge is not something we do lightly but unfortunately, like other suppliers, we’ve had to pass this through to customers.”

And asked whether they will meet with residents and the union to address concerns, SSE said: “We’re in regular dialogue with Cube Housing Association, Bob Doris MSP, Citizens Advice Scotland as well as individual customers and will continue to engage with all parties.”

A spokesman for the Cube Housing Association said: “We’re doing everything we can to help tenants on the Wyndford estate who have been disconnected or are threatened with disconnection for not paying their bills. This includes encouraging them to engage with the energy company, set up a payment plan and making sure they are receiving all of the benefits they’re entitled to claim.

“As part of this ongoing involvement, we also check on whether a tenant is vulnerable and alert the energy company if this is the case, which prevents disconnection.

“We are always here to speak to any customers who are struggling or who have any concerns about their bills – we will do all we can to help.”

To get involved in the Living Rent tenants’ union, visit their website.