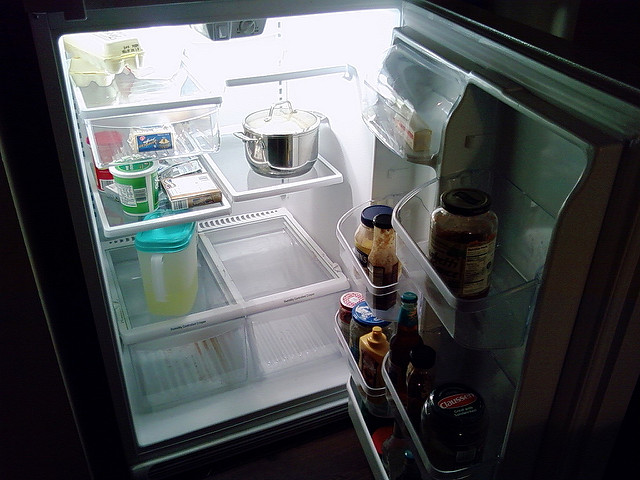 NEW DATA revealing current levels of food poverty in Scotland have prompted calls from campaigners and opposition parties for action to be taken by the Scottish Government, including the codification of a right to food in Scots law and further use of devolved welfare powers.

Figures released by the Independent Food Aid Network (Ifan) and A Menu For Change has shown that 84 food banks throughout Scotland distributed 221,977 emergency food packages between April 2017 and September 2018.

In addition to this, the Trussell Trust’s network distributed 258,600 further parcels of food aid during the same time period. Taken together, at least 480,600 food packages were supplied to Scots who might have otherwise gone hungry.

Further concerns over the scale of Scotland’s food poverty crisis have been raised, due to the fact that these figures do not account for smaller emergency food and anti-poverty operations who were unable to provide data, and are therefore not included in the newly released figures.

Following the publication of their findings, A Menu For Change – a partnership between the Child Poverty Action Group in Scotland, Nourish Scotland, Oxfam Scotland and the Poverty Alliance – have called on the Scottish Government to employ recently devolved powers over welfare to help tackle food poverty in Scotland.

A Menu For Change research and policy officer Dr Mary Anne MacLeod commented: “These figures are truly shameful in rich Scotland and they should make for deeply uncomfortable reading for our political leaders: the problem of rising levels of hunger in Scotland is much worse than previously known.

“The Scottish Government should be commended for its plans to help families put food on the table through the new income supplement, but promises to help people in three years’ time are of little comfort to parents whose cupboards are empty right now.

“If the Scottish Government wants to reduce the number of people facing hunger, it must urgently bring forward its plans to top-up the incomes of Scotland’s poorest families from 2022.”

Speaking to CommonSpace, Communities Secretary Aileen Campbell responded: “I absolutely agree that it is unacceptable that people are having to rely on charity to eat in a country as prosperous as Scotland and that this government has to spend £125 million to mitigate against the worst impacts of UK Government benefit cuts. We will also provide £3.5 million in 2019-20 for our Fair Food Fund to support organisations responding to food insecurity.

“Significant work is being taken forward on our low income supplement and an update on this will be provided to parliament by June. Scotland is taking concrete action to eradicate child poverty – we are the only country in the UK with legal targets to do so, all while continuing to mitigate the welfare cuts and failed policies of the UK Government which are set to reduce social security spending in Scotland by £3.7 billion in 2020-21.”

READ MORE: Special week of coverage on the right to food: Send us your views

The Scottish Government’s Child Poverty Act introduced a series of new targets towards the eradication of child poverty in Scotland, which aims to be met by 2030.

‘Every Child, Every Chance’, the Scottish Government’s first Tackling Child Poverty Delivery Plan was published in March and commits a range of actions to tackle the key drivers of child poverty. It includes the Best Start Grant for low income families and £12 million for intensive employment support for parents. The Best Start Grant Pregnancy and Baby Payment was launched last year, and provides families on certain benefits and tax credits with £600 on the birth of a first child and £300 for second and subsequent children. Two new payments of £250, per child, around the time of starting nursery and school will be introduced this summer.

The Scottish Government have also increased the money carers receive through the Carers Allowance Supplement, increased the minimum level of School Clothing Grants to £100 per child, invested £1 million for affordable credit and launched our new Financial Health Check service, backed by £3.3 million over two years.

However, opposition parties have called for additional measures in response to the new data.

“I absolutely agree that it is unacceptable that people are having to rely on charity to eat in a country as prosperous as Scotland and that this government has to spend £125 million to mitigate against the worst impacts of UK Government benefit cuts.” Communities Secretary Aileen Campbell

The Scottish Liberal Democrats’ Social Security spokesperson Caron Lindsay told CommonSpace: “These are terrifying figures. As a matter of urgency, deep cuts to Universal Credit, which disproportionately hurt poorer families should be reversed. We also need to end the two child cap and the benefits cap which are having such an awful impact on families across the country.”

A Scottish Socialist Party spokesperson also told CommonSpace: “These latest figures are really shocking but sadly not a surprise.

“Employers are exploiting people on zero hour contracts and slave wages. It’s so bad that many hundreds of thousands of people across Britain rely on food banks to feed themselves and their families and most of them are working! This cannot go on.

“The Scottish Socialist Party campaigns for a £10/hour minimum wage regardless of age with a minimum 16 hours guaranteed each week and for this rate to be applied universally regardless of age.”

“In the last four years we have collected over 100,000 signatures on the streets communities and workplaces supporting this view and the government is well aware of this.

“Without such campaigning the poverty wage epidemic in Scotland and the UK would be even worse.”

Speaking to CommonSpace, the Scottish Greens’ Food and Farming spokesperson Mark Ruskell MSP said: “These heart-breaking figures reveal the extent to which the failed rollout of Universal Credit is impacting on people’s lives. Research repeatedly shows the link between the new system and foodbank use, and the UK government needs to stand up and take responsibility for the thousands of families going hungry in Scotland.

“The Scottish Greens have fought hard to ensure dignity is at the heart of devolved benefits in Scotland, and enshrining a right to food in Scots law could help reinforce this. The planned pilots of a Citizen’s Basic Income in Scotland could also be transformative. We need to make sure that people always have the financial means to access adequate food, and put an end to the need for foodbanks in Scotland.”

“Everyone in Scotland has a right to nutritious food that is fairly and sustainably produced – but the government is failing to deliver this.” Scottish Food Coalition chair Professor Mary Brennan

The need for a right to food in Scots law was also emphasised by Professor Mary Brennan, chair of the Scottish Food Coalition, who told CommonSpace: “It is even more urgent than ever that the Scottish Government bring forward an ambitious Good Food Nation Bill to transform our unethical, unfair and for some inaccessible food system. Everyone in Scotland has a right to nutritious food that is fairly and sustainably produced – but the government is failing to deliver this.

“That’s why we, the Scottish Food Coalition, are calling on the Scottish Government to enshrine the right to food into Scot’s law, thus taking responsibility for ensuring that Scottish food policy is joined-up and ambitious and recognising that the issues facing the food system range from food insecurity to environmental impacts, healthcare crisis and workers’ rights abuses. The Scottish Government urgently needs to develop and pass ambitious new legislation to prevent this dire and unacceptable situation from getting even worse.”

The Scottish Food Coalition has urged Scots to respond to the Scottish Government’s consultation on the Good Food Nation Bill, which is now open until 18 April. The Scottish Government is also increasing its Fair Food Fund to £3.5 million in 2019-20, in order to offer greater support to organisations that are responding to food insecurity in order to provide dignified access to nutritious food and help to tackle the causes of poverty.

Picture courtesy of This Year’s Love

CommonSpace Forum 28 March: Food, Poverty and Brexit: Should we demand the right to food? 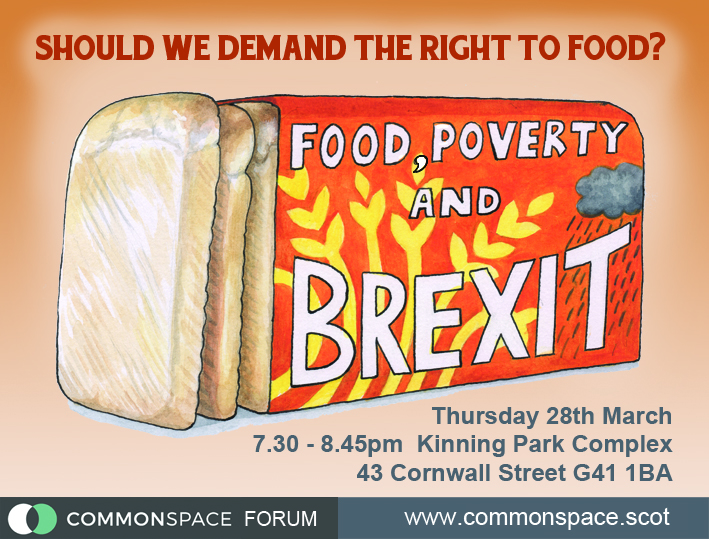