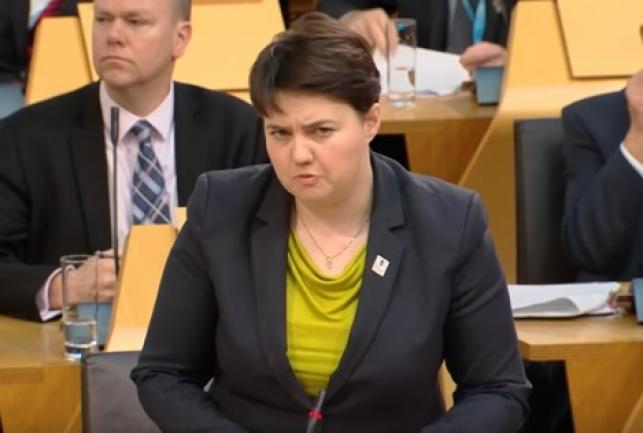 Update: This article from 2018 has now been updated to reflect subsequent events.

The Scottish Standards commissioner later considered a complaint against Mr Ferguson. He was cleared of accusations made against him.


TODD FERGUSON was criticised by opposition councillors for a tweet which highlighted SNP councillor Joy Brahim’s citizenship status in order to attack her political views, seemingly suggesting that Brahim was wrong to serve her community and have an opinion on Scottish independence because she is not a UK citizen.

In 2017, Ferguson was forced to apologise to Brahim for a similiar outburst.

In a now deleted tweet, the councillor wrote: “JoyoftheSNP, a fellow Cllr, went on a witch hunt when I asked why she wanted to break up the U.K. being from the EU. Despite living in this country for seven years, she is not a citizen, but is happily pocketing two tax payer funded jobs via the SNP.” 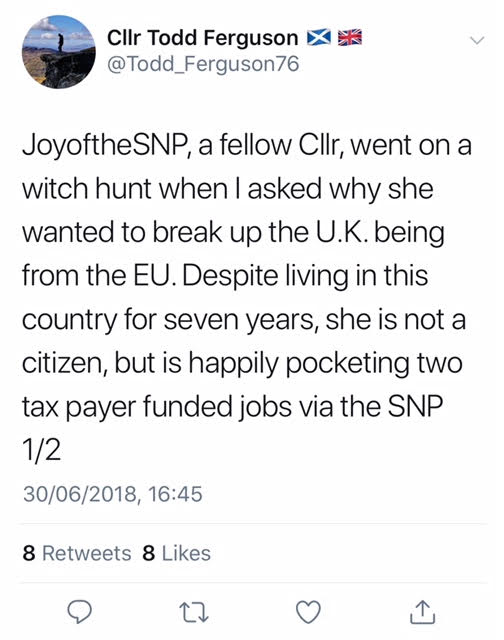 The tweet quickly attracted criticism online, with Scots branding it as “xenophobic” and asking the councillor to consider his words.

Ferguson deleted his account on Monday [2 july] after CommonSpace contacted the party.

Brahim told CommonSpace that she moved to Scotland eight years ago from Netherlands:  “Ever since [the SNP] were elected, councillor Ferguson has consistently tried to undermine me and this is just the latest example of that.

“His twitter account is full of examples of his hatred for people who are different to him. Recently he referred to a constituent on Twitter as a ‘tardo’, presumably meant as a slur against people with learning difficulties.

“It is time for him to resign, because his hatred is clearly stopping him from doing his job.”

North Ayrshire Labour councillor Robert Foster, who alerted Brahim to the tweet, also condemned Ferguson: “There should be no place in our political discourse for attacks like this. The comments made by Todd Ferguson should be unacceptable to all, but for an elected councillor to share these views is troubling to say the least.

“There is no excuse for comments like these and we should all stand up against any form of racism or xenophobia when we see it. I would urge the Conservative party to take action to highlight that their elected members attacking opposition politicians simply because they were born outside the UK is wholly unacceptable.”

The Scottish Conservative group leader in North Ayrshire, Tom Marshall, refused to comment on the specifics of the case when contacted by CommonSpace, but confirmed that Tory HQ in Scotland were aware of the issue.