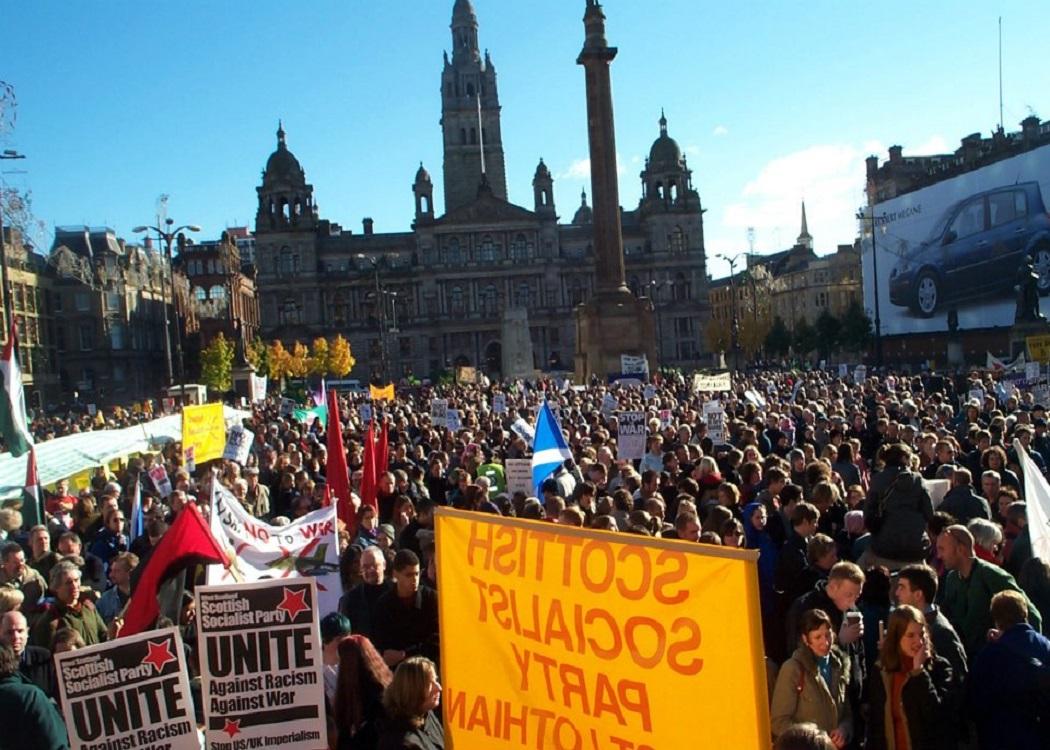 THE foundations of Scotland’s new rigorous political estate are still under debate. The most obvious cause is the eruption of interest in politics prompted by the 2014 Scottish independence referendum, but even in the fast paced environment of a digital 21st century, two years of campaigning seems like an incredibly short time for such a huge political change. Fires don’t burn as brightly, or as passionately, as this immediately.

So where else could the spark for the burning political passions of modern Scotland come from? The match struck on the steps of 10 Downing Street on 19 March 2003 may be the likely suspect.

Tony Blair’s record, and despite Gordon Brown’s Scottish roots it is Blair who is intrinsically linked with the idea of the Labour party in Scotland, is defined by his position on Iraq.

The Labour stronghold in the north seems to have collapsed at an alarming rate. Could the war in Iraq be the initial fracture in the parapet?

During Blair’s initial terms he increased quality of life for the poor exponentially, though he also made the rich much richer. He introduced the minimum wage, he helped abolish third world debt and he led the Labour party to an unprecedented three consecutive victories in UK General Elections against what Scotland has often perceived as the villainous Tories.

He also invaded Iraq. He took the people of the United Kingdom into Iraq to fight a war based on at worst falsified and at best inaccurate information. Academic justifications fail to hold sway over the emotional frustration of that event.

The invasion of Iraq was based on urgent warnings about Saddam Hussein’s ‘weapons of mass destruction’ and his ability to deploy them in as little as 45 minutes. But no such weapons were ever recovered, and the war left hundreds of thousands of people dead, as well as plunging Iraq into long-term instability and sectarian violence.

This is a legacy very different from what Labour envisioned prior to the invasion of Iraq. In fact, the party’s initial “an SNP big boy did it and ran “away” approach to analysing its 2015 General Election results in Scotland suggest it’s a very different legacy from what was imagined even a few months ago.

The Labour stronghold in the north seems to have collapsed at an alarming rate. Could the war in Iraq be the initial fracture in the parapet?

Given that the Labour presence in Scotland was based on tradition and values, it is possible to see a link between the war and the voting patterns of the generation who associated their first experiences of a Labour government with war.

The youth of the Iraq war are now in their 20s and 30s – how influential was the war in shaping the politics of that generation?

Stephen McIlkenny, 24, is an SNP party member and a former Labour supporter. A Labour supporter by proxy and tradition in his youth, the invasion of Iraq forced him to question his home grown political values.

“It was first time that I have ever seen one of my family members – who all voted Labour – not go and vote as he was so sickened against the war.” Stephen McIlkenny

“It influenced me and I couldn’t even vote,” he says. “I felt betrayed by the decision and still do. It was first time that I have ever seen one of my family members – who all voted Labour – not go and vote as he was so sickened against the war.”

The largest demonstration in British history was against the Iraq War. Two million people gathered to proclaim the war was not in their names. Two million people who marched were ignored. Add to that all those who didn’t, or couldn’t, march and the number of those who felt disillusioned, ignored and betrayed, and a picture begins to build of a pivotal moment.

When new Labour shunned those people it unwittingly delivered a catalyst for change into the minds of many young people.

Shaun Kavanagh, 27, was a vocal SNP activist in Inverclyde during the campaigns for both the independence referendum and the 2015 Westminster elections, and recently took up a role as a researcher within the party. He clearly recalls how influential the war was on his own journey into politics.

“The Iraq war had a profound impact upon my political overview,” he explains. “I had grown up in a fairly political household, and had an interest in politics from a young age, but I think Iraq was a turning point in turning my interest into engagement.”

The reputation of a party that had its foundations rooted in the ‘truth’ of social justice was clearly undermined by the actions that led to the invasion of Iraq in the eyes of at least some, perhaps many potential young voters.

The perception throughout the United Kingdom, and more than likely internationally, was that the Labour government lacked a spine. Where the radicals like the Greens, the SNP and the SSP campaigned fiercely on ideals, the incumbent party quietly appeased the concerns of a right-wing American government ahead of its own people.

“It seemed as if the United States was calling the shots and the UK government, Tony Blair and the Labour party in particular, were merely falling into line so as not to upset a crazed president,” Kavanagh continues.

“It was symbolic of the failure of the checks and balances that are the hallmark of democracy.” Shaun Kavanagh

“That the perpetrated myth was so successful is also an indictment of a corrupt administration. It was symbolic of the failure of the checks and balances that are the hallmark of democracy.”

Was this more damaging for Labour north of the border than south? There is little evidence to support that idea. It took the SNP a term in coalition to completely oust Labour for a Scottish Parliament majority and Labour won the 2005 election with a majority, even if it was a reduced one.

Stephen Paton, 27, is the founder of Left Scotland and supporter of the Scottish Green party, and he suggests that it was the actions of the party following the war, rather than the war itself, that began to influence the new generation of voters.

“My distrust of the Labour party stemmed from the consequences of the war,” he explains.

There were ‘good guys’ in British politics during the Iraq War: The Liberal Democrats. They stood against the war with vocal passion. And yet, this defiant stance of the Liberal Democrats, led by the late influential Scottish MP Charles Kennedy, has not resonated in the way that the war itself did.

“I think those who opposed the Iraq war have been largely overshadowed,” Paton continues. “When we talk about politics in pubs and cafes now, the word on everyone’s lips is ‘referendum’.

“My distrust of the Labour party stemmed from the consequences of the war.” Stephen Paton

Though a week is certainly a long time in politics, the war of a decade ago is hardly forgotten in the current political discourse. It has become an ageing scar in the side of Labour to easily prod as opposed to a fresh wound to explore. But how prominent is it?

“The grievances the younger generation hold toward the Labour party are so much more to do with their recent behaviour than the Iraq war,” Paton argues.

“If anything, an apology from Labour on the Iraq war would probably be viewed as a safe political stunt to win back voters, rather than a genuine apology.”

Perhaps that is the real legacy of the Iraq War for Labour: a sense of mistrust. The war didn’t spark a political revolution overnight but it helped create the kind of ferocious mind-sets that do spark new ideas, question the status quo and fight for change.

The first grudge is not necessarily the deepest, it seems. But it’s rarely forgotten.