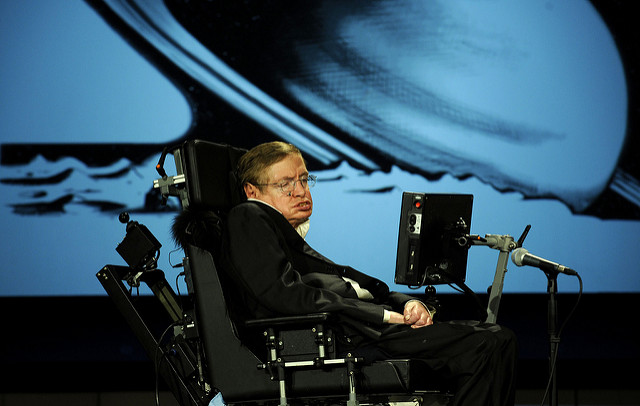 Following the death of esteemed physicist Stephen Hawking, Morgane Colinet – who is a journalism student at the University of the West of Scotland and is completing a work experience placement at CommonSpace – takes a look at the lesser known political side of the scientist

“STEVE was a remarkable man. This is the end of an era,” says Professor James Hough, hours after it was announced that Professor Stephen Hawking had died at the age of 76. Hawking’s Motor Neurone Disease was expected to greatly diminish his life expectancy, but the scientist lived much longer than doctors predicted.

Professor Hough, a research professor in natural philosophy at the University of Glasgow, first met the British scientist in 1973 when Hawking came to Glasgow to give a talk with fellow scientist Gary Gibbons. A conference in the late 1990s brought the two professors together again, and the pair crossed paths multiple times over the years. Hough holds very fond memories of Hawking.

“I have the highest regard for him,” he says. “I am not much younger than Steve; he was 76 and I am 73. The enormous impact he has had on the public perception of cosmology and black holes is incredible.”

Political debates that Hawking offered viewpoints on included assisted dying, which he agreed with, and the Iraq war, which he thought of as a war crime.

Although highly revered in the academic world – Hawking famously authored A Brief History of Time and his work in black holes and relativity greatly shaped the science and physics world – there was a perhaps lesser knows side to Professor Hawking. He was heavily involved in the political world and had no fear of sharing his thoughts. It’s thought he was influenced a great deal by his Scottish mother, who was a liberal activist.

Hawking later became a Labour supporter, although he was not very fond of current leader Jeremy Corbyn, going so far as to say he was a “disaster”. Another disaster in his eyes was Brexit and he campaigned very strongly for the UK to remain in the EU, as he believed leaving would negatively influence science funding. A lack of science funding in the UK also led to Hawking declining a knighthood in the 1990s.

Other political debates that Hawking offered viewpoints on included assisted dying, which he agreed with; the Iraq war, which he thought of as a war crime; nuclear weapons, which he saw as dangerous to the survival of humankind; and Donald Trump, whom he called a “demagogue”.

But Hawking did more than just offer views. At the time of his death he was involved in a legal battle with Health Secretary Jeremy Hunt. Hawking was a vociferous supporter of the NHS, which he credited with saving his life. Amid an escalating crisis in the NHS over fears around introducing more private funding to the national service, and pay cuts, Hawking stepped in and joined four academics and NHS campaigners in a legal battle against Hunt. Although he put the blame on all ministers, he made sure to single out the health secretary, and claimed Hunt was not being completely honest about the evidence he was putting forth in his speeches.

Outside of the academic and political world, Professor Hawking also appeared in multiple television series such as The Simpsons and The Big Bang Theory, which gave him a following in popular culture and an appeal among younger people. The Theory of Everything, a film documenting Hawking’s life, won an Oscar in 2015.

Stephen Hawking appears in The Simpsons

Upon news of his death, Nasa and Cambridge University were among the first to pay tributes to the scientist. Others soon followed, including American astrophysicist Neil deGrasse Tyson, French President Emmanuel Macron, Prime Minister Theresa May, and actors Eddie Redmayne and Benedict Cumberbatch.

Professor Hough has always been astounded by the success of the late physicist’s book, A Brief History of Time, which spent 237 weeks on the Times’ bestseller list and 147 weeks on the New York Times bestseller list. “Steve was very good at translating science work for normal people,” he explains. “The number of people who would tell me they read and understood the book is unbelievable. He succeeded in creating a book that could be found lying on anyone’s coffee table.”

Hough was earlier this year awarded the highest honour from the Royal Astronomical Society. He won the gold medal in astronomy for his work on gravitational waves – an honour Hawking himself was awarded in 1985. Professor Hough has worked at the University of Glasgow, where he graduated, since 1986 and is also a visiting professor in Physics at the University of Strathclyde.

Multiple Scottish establishments were heavily influenced by the late scientist’s work. Gillian Lang, deputy director of science at Glasgow Science Centre, tells CommonSpace: “It’s so sad to learn of the passing of modern cosmology’s brightest star. His ideas about the universe, from the Big Bang to time travel to quantum fluctuations in the fabric of space, and his ability to communicate them so skillfully leaves a great legacy. An inspirational genius who influenced us all. Rest in peace sir.”

Hawking also spoke out against nuclear weapons, which he saw as dangerous to the survival of humankind, and Donald Trump, whom he called a “demagogue”.

One of the reasons, according to Professor Hough, that Hawking’s death will have such an impact on people is due to the very public side of him: “The way he explained science and cosmology and turned a complex subject into something that was easy to understand allowed the public to relate to him. The way he battled through his health problems also made him a very strong individual.”

Hawking himself offered thoughts on his inevitable passing in an interview with the Guardian in 2011, and demonstrated his inimitable thirst for life: “I have lived with the prospect of an early death for the last 49 years,” he said. “I’m not afraid of death, but I’m in no hurry to die.