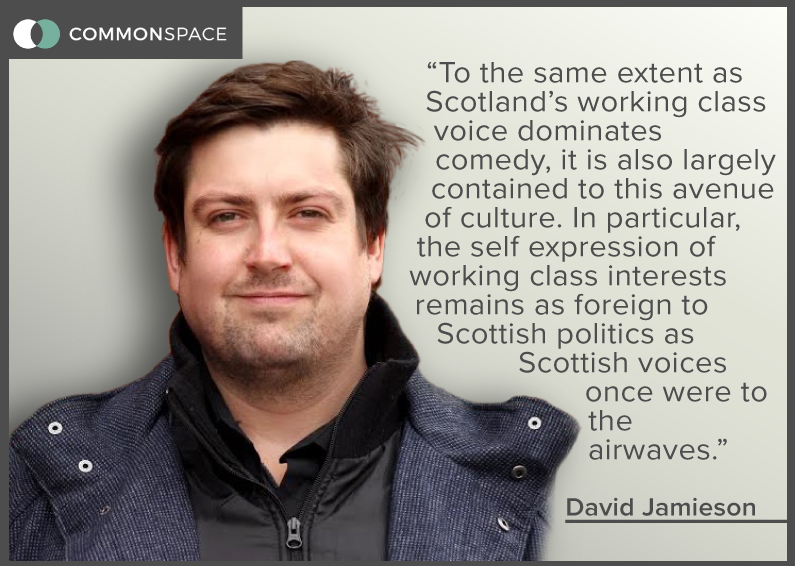 THE Scottish comedy scene is saturated by working class humour. From sketch shows like Burnistoun and Limmy to stand up acts like Frankie Boyle, Kevin Bridges and Janey Godley. Their predecessors like Still Game and Rab C Nesbitt remain national favourites.

It’s not a new phenomenon. Lex Maclean, Chic Murray, Billy Connolly and many besides are important precursors. But the hegemony is new.

Saturation typically leads to antipathy and rejection by audiences. And yet there are no calls in Scotland for a more effete comedic form.

And this despite that fact that the working class, of course, no longer exists. It crawled under the ground at some point in 1997, when John Prescott, the man brought into New Labour to shore-up it’s working class credentials, stated: “We’re all middle class now.”

How does Scotland explain its obsession with working class comedy in such an era?

READ MORE: “If I walk out there, I’ve got something to say”: CommonSpace talks to comedian Barry Crimmins

Actress and Comedian Elaine C Smith was a central figure in the new wave from the mid 1980’s, through the original performances of ‘The Steamie’ (which she recalls struggled to get an airing due to its content) and the ground breaking BBC sitcom ‘Rab C Nesbitt’.

“I think in Scotland, there’s such a large working class audience. Somewhere like London or elsewhere if your in theatre or live performance, there’s a larger concentration of upper class people and shows tend to reflect that.”

This is something she thinks has been traditionally mirrored by broadcast executives.

“Of course, a lot of executives and people high up are from elite schools, and they tend to have a certain view of what makes good comedy. And I love Stephen Fry, but it is stuff of the Fry and Laurie variety.”

There was a time, Smith says, where the predominant Scottish voice in the media would be an anglicised one: “You know, the people who say ‘Scodland’ instead of Scotland.

“I grew up in a working class household, and I remember my mum adopting a different accent when she was on the phone. Or if we went down south for holiday, our parents telling us to speak clearly.”

Though the worse days of class deference in the media were already behind it, when Rab C Nesbitt hit the screens in 1988, it still landed like a bombshell.

“The people who got angry were Scots, the Scottish cringe types. They would say this was a terrible advertisement for Scotland, ‘that’s all we need, another unemployed alcoholic’.

“And they were the only ones who complained that people ‘wouldn’t be able to understand’ the accents. Those complaints didn’t come from the English audience.”

Rab himself is hardly a flattering depiction of a working class person. A drunken, lovable “waster” in his own description: “But of course any comic character is heightened.”

Smith maintains though that the characters are sympathetic, intelligent and above all, relateable.

“I remember once being in Glasgow, and a woman pulling me up and saying ‘are you Mary for Rab C? That’s the best portrayal of a working class woman i’ve seen’. It was more valuable to me than an Oscar.”

Jack and Victor, the two elderly working class pals whose relationship forms the basis of ‘Still Game’ are, for many Scots, two of the most welcome characters ever to appear on TV screens.

Perhaps this is the work of hindsight, but it feels as though the pair, played and created by Greg Hemphill and Ford Kiernan, arrived at an important point in the development of modern Scotland. The merchants of national positivity who curated the opening of the Scottish Parliament in 1999 had to contend with Jack and Victor’s first ‘Chewin the Fat’ sketch appearance in the run-down Craiglang estate, eloquently introduced as a “shitehole” by the duo in the first episode of the spin-off show in 2002.

According to Hemphill: “The real meat of it is we wanted to portray working class Scottish people who have basically had a tough life and who have found happiness within that tough life.

“Because of their dogged determination, we hoped that the audience would get behind them.

“But they also have fantastic lives, they get involved in all these schemes and plans…I always hoped my life would end-up like theirs. It’s about the pursuit of happiness, happiness against the odds.”

“We avoid politics, we avoid religion and we avoid football. But that doesn’t mean you can’t have socialist aspirations with a small ‘s’.”

One notable early episode which explored the hardship faced by older working class people, ‘Cauld’, deals with a particularly harsh winter, with all of the elderly residents of Craiglang feeling it acutely. Winston, Jack and Victor’s friend, devises a way to steal electricity, and is ostentatiously bathing in heat.

“One character [Victor] refuses doggedly to do it because he doesn’t believe in thieving.

“By the end of the episode Victor’s life is literally on the line, he’s about to die in his sleep when his friends wake him up.

“He has to ultimately decide, ‘I’d like to live, thank you very much’.”

Though Hemphill and Kiernan drew on canon, their most important inspirations were family. Hemphill’s grandparents were Irish migrants, who lived in the Maryhill area of Glasgow for half a century. Much of Still Game would eventually be filmed in the working class community.

“The overriding thing with my Dad was fairness. Giving everyone a crack of the whip no matter what their background. A lot of Jack and Victor’s interactions come from that. They don’t have inverted snobbery, they don’t have a chip on their shoulder.”

Mick Clocherty: Why there’s not too much sympathy for ‘Count Dankula’ in Glasgow’s comedy scene

Invariably, any depiction of working class life, no matter how comedic or fantastical in intention, becomes subject to intense scrutiny:

“I remember being told once by a commissioner, that he didn’t like Still Game because he felt it was patronising to the working class. I found that quite flabbergasting. We had a million and a half viewers at the show’s height. A lot of those people, the majority, will be working class. How patronising is it to say those people don’t know they are being patronised.”

Why feature distinctly class identities at all, in the supposed period of post-class society, when the market has won and ideology is dead?

Its not an exotic idea, in the era so suspicious of the mainstream media, that, as Karl Marx challenged: “The ideas of the ruling class are in any epoch the ruling ideas”. So how can such a thorough takeover of a major cultural experience be accomplished, or even permitted?

For some Frankfurt School critical theorists, whose influence permeates a modern fascination with cultural criticism, the presence of uncomfortable realities in popular culture often speaks to the dominance of ruling ideas themselves.

For Herbert Marcuse, ‘tolerance’ of dissident narratives, was part of the operation of containing dissent, part of a social bargain struck in the favour of the powerful: “It is the people who tolerate the government, which in turn tolerates opposition within the framework determined by the constituted authorities.”

This is surely an insight of some gravity. In the record of the 20th century, it is plain to see that the forms of class rule which carried on with the least impediments, Britain for example, or the United States, were precisely those which achieved a balance of criticism in social life – but only so much, and only within a dominant political paradigm.

Those societies, Russia for example (under various regimes), that insisted on a greater rigidity of cultural life, a narrower definition of acceptable opinion, were typically those which suffered the most upheaval.

The space for dissent therefore exists, but why has working class comedy – its accents, its identities, its idioms, its lives, taken up such considerable space in modern Scotland?

It could be that the post-class society has been so rammed-down everyone’s throats. Pushed out of the workplace, out of parliament, and out of so much of public life, it is perhaps no surprise that working class identities and frames of reference would have to re-emerge somewhere – and somewhere it could be appreciated by a mass audience.

The other side of the coin from Marx’s “ruling ideas”, the antagonist in Marcuse’s toleration by the dominant, is the lived experience of the working class itself.

No amount of banality about post-class societies actually does away with the working class, or its irrepressible conflict with the profit system. And it is this conflict, this relationship with the leadership of society, that gives rise to the working class’s cultural awareness of itself.

According to the philosopher Franz Jakubowski, the working class maintains an important aspect of this class dynamic whether it identifies its political interests or not:

“The proletarians are forced into unity by their conditions of life. Their economic situation, first of all, unites them into a class confronting capital, a class “in itself”, and the consciousness of this fact then makes it into a class “for itself”.”

If true, in some form or other, the inclinations and expressions of the mass of society will always out, regardless of the low ebb of class politics.

And the characters and situations of the comedy, like those lived experiences, keep changing. ‘Two Doors Down’ the latest sitcom that Smith stars in, is for another part of the working class story “that part of Glasgow that scraped together enough money to buy a house”.

We await the comedies for generation rent. Or perhaps we already have them, in the sparse, dark and hyper-personal and yet disorientating sketches of ‘Limmy’s HomeMade Show’.

But the continued lineage of Scottish working class comedy faces industrial threats. Austerity is forcing young working class actors and writers out of their crafts.

Smith wants to see critics take traditional working class forms of theatre seriously, and changes to the regime of grants providing organisations and arts institutions with their funding.

“Perhaps there should be working class representation on every board, representatives from Bectu (the actors union) and the musicians union.”

For Hemphill, there needs to be more locally produced programming.

“As loved as Only Fools and Horses was in Scotland, it was adored in places like the East End of London. There’s a reason that Peter Kay still lives in the same street where he grew up.

“There aren’t a lot of Scottish shows. Not enough, that’s for sure. When a show like that does come along and strikes a cord with an audience, they are hungry for them. Because they get a chance to see themselves on TV.”

Yet a gulf remains between the popularity of working class comedy, and its mass audience, and the levers of political and economic power.

To the same extent as Scotland’s working class voice dominates comedy, it is also largely contained to this avenue of culture. In particular, the self expression of working class interests remains as foreign to Scottish politics as Scots once was to the airwaves.

We can hope that the transition from “in itself” to “for itself” isn’t too far off, and still hope that doesn’t mean losing the laughs.