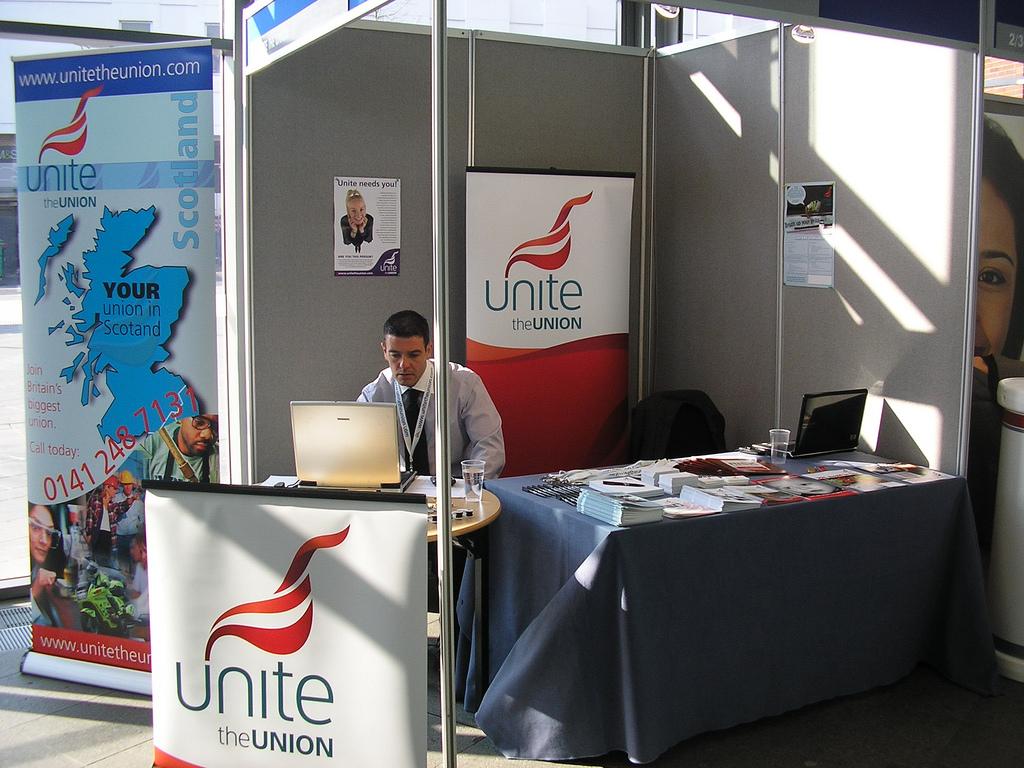 ONE HUNDRED YEARS ago this month, Mary Barbour led the Glasgow Rent Strike. That movement defeated local landlords and ultimately won a change in the law to cap rent prices. After mass demonstrations, including violent clashes with the police, one of the key weapons the Glasgow Women’s Housing Association had was to march to the Clyde and get the support of the factory workers, who threatened to go out on strike if the evictions were not halted. Not long after, on 17 November, the landlords caved in, and ended legal action against the rent strikers.

Just four years later, trade unions led one of the most powerful strike movements in UK history, where tanks had to be rolled into George Square to try to stop ‘Red Clydeside’.

What would trade union leaders, gathered at this year’s STUC annual conference in Ayr, give to have the power of ‘Red Clydeside’ today, 100 years on?

CommonSpace met Pat Rafferty, top dog of Unite the union’s Scottish section, to discuss the future for Scotland’s biggest union, and how it plans to rebuild the strength of the trade union movement.

Trade unionism in the age of zero-hours contracts

One aspect of modern work that has striking similarities to workplace conditions a century ago is zero-hours contracts. While workers used to go down to the docks to see if they could get a shift, today they get a text in the morning letting them know if they are wanted or not. What can a union like Unite offer someone living week to week, month to month, on a zero-hours contract?

“Unite is there to represent members from all walks of industry, people in work and people out of work,” Rafferty says. “In a situation like zero-hours contracts, it’s really a political campaign that’s needed because it can be really difficult for people to hold their heads above the parapet and fight it.

“It’s unions like Unite that can help to put pressure on politicians at Scottish parliamentary level and Westminster level. To get changes in employment laws, changes in working practices, that eradicates use of zero-hours contracts.

“But of course, size does matter as far as unions are concerned, and the more members you have in the union, the more clout you’ve got to push these kind of changes at a political level. And it is all the more reason people should join the union, to get not just changes at their workplace but political changes that make a difference to workplace issues.”

Rafferty’s answer gives some sense of how trade-unionism has developed in the post-war era. Whereas at the time of the rent strikes there was hundreds of small craft unions on the Clyde, today trade unions are huge institutions, increasingly representing people from a wide range of industries.

Unite, Unison and GMB are the three big beasts of British trade unionism, with Unite the biggest of the lot, and despite membership falling over the recession, it still stands at roughly 1.5 million across the UK. The union, therefore, is not just an organiser of industrial struggle, it’s a legal and advocacy service, a community organiser and, critically, a political lobbyist.

Rafferty is convinced that one of the aspects needed to unlock the power of the trade unions again is political change.

“It’s difficult because we’ve had the anti-trade union laws since the Thatcher days, and while the Labour government took some measures to push these things back, it is still a long way from where it should be. These legal barriers that we have when trying to organising people, especially in small workplaces, are a real problem.

“For example, to get collective bargaining for people in a workplace, the law as it stands right now means you need to have 20 people in that workplace. That’s just ridiculous, because the way business is set-up these days there’s lots and lots of businesses with less than 20 people working for them, and it cuts out a whole swathe of working men and women from that statutory right,” Rafferty says.

Neither the SNP nor Labour are currently proposing rolling back Margaret Thatcher’s anti-trade union laws, although SNP leader Nicola Sturgeon did make it clear in her speech to the STUC that she would oppose any new moves from the Tories to introduce changes to strike ballots so 50 per cent of all members, not just the ones who vote, have to support the action.

A fair work convention in Scotland has also been launched by the Scottish Government with the backing of the STUC, which will make policy proposals about how to improve trade union and workers’ rights in Scotland, although any proposals will be hindered by the failure to devolve employment law in the Smith Commission.

It is perhaps these political issues that have caused most consternation within the trade union movement in recent years, especially in Scotland where the union’s traditional position of backing and funding the Labour party has come under increasing scrutiny.

Labour have suffered a huge drop in support while the SNP have seen a massive increase in membership as the political balance shifts in the post-referendum context.

Many trade unionists also question Labour’s credentials to continue to represent the trade unions. New Scottish leader Jim Murphy has never been associated with the trade union wing of the party, and criticised Unite in 2013 over the Falkirk candidate selection row, of which the union were eventually cleared of any wrongdoing in an internal party review.

Unite’s own UK leader Len McCluskey said prior to Murphy’s election that if the East Renfrewshire MP became top dog of Scottish Labour it would be “political death” for the party in Scotland.

So why does Unite remain the party’s biggest donor, and why did members receive a ‘Unite Works’ monthly magazine in April filled to the brim with arguments for why people in Scotland should vote Labour?

“What people have to understand about the Labour link is that it’s a matter for our lay members, it’s a matter for our rules conference and for our policy conference, where policy over the Labour link is decided by the members. It’s not the general secretary who makes the decision over these things, it is the members themselves who set the rules. We as staff apply the rules based on members wishes,” Rafferty answers.

Anyone who knows anything about the trade unions will be aware that the leadership are far from passive administrators, and Rafferty said that he was backing a motion from the regional Scottish committee to the rules conference in July that could lead to a trade union version of home rule in Scotland.

“The motion proposes that there should be a new rule within Unite rule book that reflects policy within the union for Ireland, were we have members. The policy gives Ireland a bit of autonomy. So this rule change would allow Scotland some political autonomy; the regional committee would become the executive committee, and the political direction and the political strategies would be determined at the Scottish level.

“It would of course still work in co-ordination with the national organisation, but it would give us a Scottish policy conference which would make decisions here, and effectively give us that autonomy.”

Could these changes be implemented in advance of the 2016 Scottish elections, where currently Unite would be expected to bankroll a Jim Murphy for First Minister campaign?

“If that change happened, you would potentially be looking at having a policy conference by the end of this year,” Rafferty said, and he agreed that this change could be described as a form of devolution within the trade union structure.

Unite in Scotland would then be in a position to decide who it gives its money to, with some suggesting that a PCS model – where unions provide support for candidates from parties based on the extent to which they support trade union policies and principles – is the way forward, rather than blanket support for one party.

Would many Scottish Labour candidates get backing from Unite under such circumstances? Grahame Smith, STUC general secretary, made a surprisingly blunt critique of Scottish Labour under Murphy’s leadership, saying he had “nothing” to say about trade unions and trade union rights.

Rafferty’s view is that the jury is still out.

“There’s a huge challenge for Scottish Labour, and there’s no getting away from that. I didn’t support Jim Murphy’s candidacy, that’s no secret. But it will be 2016 that is the deciding factor on this one, and I dare say that Jim Murphy will be judged on what he delivers and what he doesn’t deliver in terms of policy.”

Rafferty believes Murphy needs to find a way to rebuild trust and authentic connection with its traditional working class “heartlands” in the West of Scotland.

“He needs to install policies that people can believe in, that shows he is in touch with people, and create that trust between him and the people. That when he says those things people know he will deliver. The Labour Party over the last few years, I would say since 2007 going forward from there, hasn’t kept pace with the wishes and wills of its heartlands, and lost a bit of its heartlands, and a bit of that trust.

“Jim Murphy will be judged up to 2016 on whether he can regain that trust, and he can deliver policies that people want. Time will tell.”

Generations then and now

While Scottish Labour has clearly not benefited from the dramatic rise in political participation after the referendum debate, Rafferty is determined that Unite and the trade union movement as a whole can build a new generation of trade union activists out of the referendum mood.

“It’s absolutely crucial,” he says. “The lead up to the referendum was absolutely fantastic. I’ve never seen people so politicised, and so politically in tune with what was going on.

“The challenge for us, and the opportunity for us, is that we need to keep that engagement, we need to tap in to that, so people understand that from the minute you wake up and that alarm clock goes off to the minute your head hits that pillow at night there’s always a political end to all that you do. And none more so than in the world of work, because that is what everything is governed by.”

Mary Barbour will be commemorated by a statue in Govan this year, which ex-Manchester United manager Sir Alex Ferguson has contributed money towards. Ferguson comes from an era of trade union militants in Glasgow in the 1960s-70s who lived and breathed industrial struggle, and knew how to fight and win. That older generation is still in the main firmly wedded to the Labour party, and the notion that it remains the party of the working class.

Those, like Rafferty, who lead today’s trade unions know that they are living in more complex times, where old affiliations have withered to the point of discordance: internal Unite polling revealed 46 per cent of members voted SNP in the 2011 Scottish elections, long before the nationalist’s rise to being the largest party per population in Europe.

Recruiting to the union and organising workers is also not as straight forward as in Ferguson or Barbour’s day, as Scottish workers operate in ever smaller units, including a huge rise in the number who are self-employed, with quite often a significant disconnect between their labour and the production process itself.

Scottish trade unionism therefore faces multiple challenges, of which there are no easy answers: can Rafferty and co rise to the challenge? Time will tell.