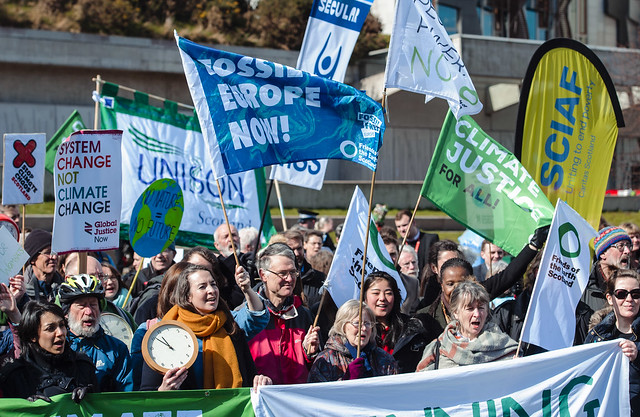 CLIMATE activists have reacted with fury to the privileged access the fossil fuel industry had to MSPs ahead of the Climate Bill debate in the Scottish Parliament today [2 April].

Oil & Gas UK represents the biggest oil firms operating in the North Sea, and were sponsored by Labour MSP Lewis MacDonald to have large display and information stall outside of the debating chamber, which MSPs walked past as they entered the debate.

While climate activists protested outside Holyrood. Scottish Greens co-convenor Patrick Harvie raised a point of order at the start of the debate about their presence, stating that he believe it contravened rules on lobbying parliamentary business.

“Apparent double standards exist,” he went on to say. “Pro-climate campaigners protesters need to organise events outside parliament, fossil fuel lobby industry which is implicated in causing this crisis are lobbying inside the parliament on the day we are debating the Bill.”

The presiding officer, Ken MacIntosh MSP, said that it was not a point of order as it did not relate to the business of the parliament, and was an issue concerning rules on stall holders in Holyrood.

Friends of the Earth Scotland said earlier that Oil & Gas UK’s presence “risks reinforcing the misconceptions of some MSPs that oil & gas is somehow nothing to do with climate change,” and they were backed up by Extinction Rebellion Scotland and Global Justice Now, who both contrasted the protest outside with the corporate lobbyist presence inside.

* For ordinary citizens: You get manhandled & ejected for doing a banner drop

* For the oil & gas industry: You get a stall sponsored by @LewisMacdMSP @scottishlabour in lobby of @ScotParl

Scandalous that the fossil fuel lobby, which is at the heart of the #ClimateEmergency, is inside @ScotParl promoting themselves on the very day that MSPs are debating the Scottish Climate Bill. #OorFuture #ClimateJustice #ClimateBreakdown https://t.co/YJbb0N5SsA

The stage 1 debate itself began with Roseanna Cunningham, Climate Change minister, re-state the case that the Bill “maintains Scotland’s place among those at the forefront of those on global ambition on climate change and makes target setting more transparent and accountable”.

The bill currently sets a target of a 90 per cent reduction in greenhouse gas emissions by 2050, a target which has been criticised by environmental activists for not going far enough and fast enough.

She reiterated her previous statement that the government would wait on the UK committee for climate change (CCC) to issue its updated report on emissions reduction in May.

“If the CCC advise that higher targets are now credible, the Scottish Government will act quickly on its advice,” she said, adding that the timetable specificaly would be: “Act to amend the Bill at stage 2 if CCC finds higher targets are possible in May, including near term targets.”

Gillian Martin MSP, convenor of the climate change and land reform committee, said the Bill was “a significant step in the right direction”, but that the committee were conscious that it was published before the crucial IPCC report last October, which stated that the world had just 12 years to make 45 per cent reductions in global emissions to prevent temperatures rising more than 1.5C above pre-industrial levels, at which point catastrophic effects of climate change would be irreversible.

The IPCC are currently meeting in Edinburgh as part of deliberations for their next report.

Martin said that the IPCC’s “stark warning” should be taken into account in stage 2 of the Bill, specifically that the next 12 years would be crucial in reducing emissions. She also said that the government should consider sector specific targets for emissions reduction.

Conservative MSP Maurice Goldman appeared to agree with the general tenor of the Bill, but said that individual ministers should be held accountable for meeting specific targets of the climate plan, so that a cohesive approach operated across government.

Labour’s shadow spokesperson on the environment and climate change Claudia Beamish MSP said that there was “was much to be proud of” in the Bill, but it still had “much further to go”.

Claudia Beamish said it was positive the Scottish Government would look at low-carbon investment targets “particularly in relation to the Scottish National Investment Bank”.

Before the debate Beamish had said that Labour would seek to amend the Bill to the effect that it contained within it Scotland’s “very own Green New Deal”, citing the slogan now commonly associated with a radical overhaul of national infrastructure through major public investment to rapidly reduce emissions.

He said that the Just Transition Commission must have a “remit to speak truth to power”, and a Just Transition plan should be “central to the purpose of government from now on”.

“No policy contradictions – all effort in the same direction,” he added.

READ MORE: Isla Aitken: The waters are rising – and so are the children

Ruskell said that it was positive that a consensus existed in the Scottish Parliament to keep temperatures below 1.5 degrees, but that “that should be reflected in this Bill”.

He said that the government’s response to the climate change committee’s report, appeared to say that it wasn’t confident that the the 1.5 degrees target could be met.

The MSP for mid Scotland and Fife went on to criticise “low key voluntary programs” in land use and agriculture, stating that it was “integral” that funding support for individual farms payments was tied to climate action going forward.

Liam McArthur from the Scottish Lib Dems said that the government had already got the “easy wins; low-hanging fruit have largely been grabbed”. He said that the Bill currently “falls short” in that it “fails to enshrine the Paris agreement”.

“The IPCC report demands a more urgent and ambitious Bill from this government and from this parliament,” he said.

The Orkney MSP disagreed with Ruskell saying that while Agriculture is “is a sector that needs to do more”, emissions reduction is “best achieved collaboratively…a carrot and stick approach…rather than a more confrontational approach unfortunately adopted by some.”

“Farmers and crofters must be seen as part of the solution,” he added.

Caroline Rance from Friends of the Earth Scotland criticised the “poor turnout” from MSPs in the debating chamber, with the majority of seats unoccupied, and said: “I feel like I’ve been listening to these exact speeches for about two years. Politicians get up and say lots of grand things about acting on climate change, but no specific plans or proposals to actually DO anything.”

FoE Scotland outlined what they believe the Bill should contain.

Commenting prior to the debate, Gail Wilson from Stop Climate Chaos Scotland, which organised the protest outside parliament, highlighted their polling showing 70 per cent of respondents want more action on climate change from the Scottish Government.

She said: ”Climate change will do irreversible damage to our planet if we don’t do more to tackle it now. This new polling shows that people in Scotland recognise the seriousness of the situation and want more action to reduce greenhouse gas emissions.

“MSPs at Holyrood must take note of the growing clamour for urgent action on climate change. Mounting scientific evidence from world experts, alongside increasing levels of public support, mean Scotland’s new climate law must rise to address the scale of the crisis presented.”

Tom Ballantine, Chair of Stop Climate Chaos Scotland, commented: “The Scottish Government is failing to tackle climate change with the necessary urgency. The Bill going through Parliament currently commits to almost no increase in action between now and 2030.

“Climate change is the most urgent and pressing crisis facing the world, and Scotland’s targets for cutting emissions must reflect our commitment to meeting that challenge. The increasing frequency and severity of climate disasters around the world show that we are running out of time to solve this crisis.”

Global climate strikes involving hundreds of thousands of school students have raised the profile of the planet’s climate emergency and the need for urgent action. 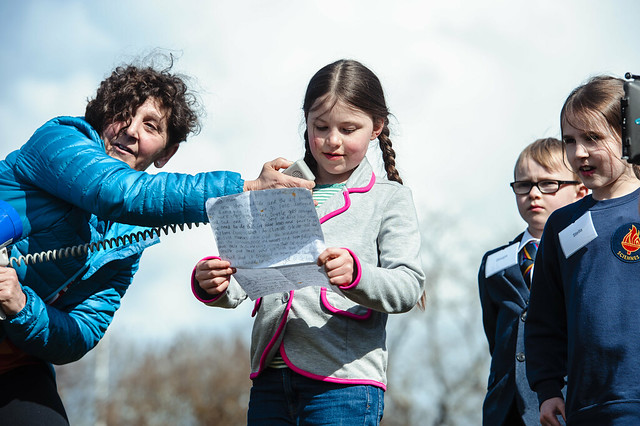 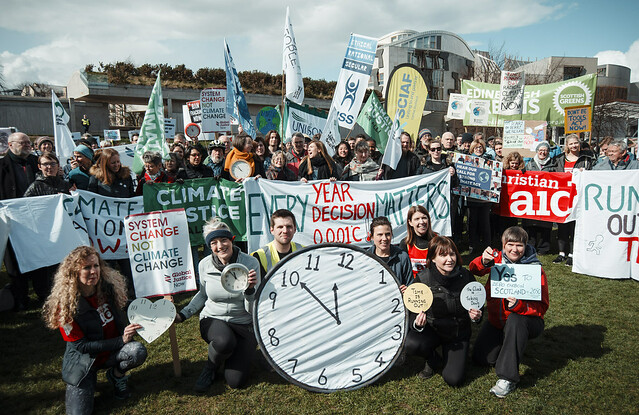