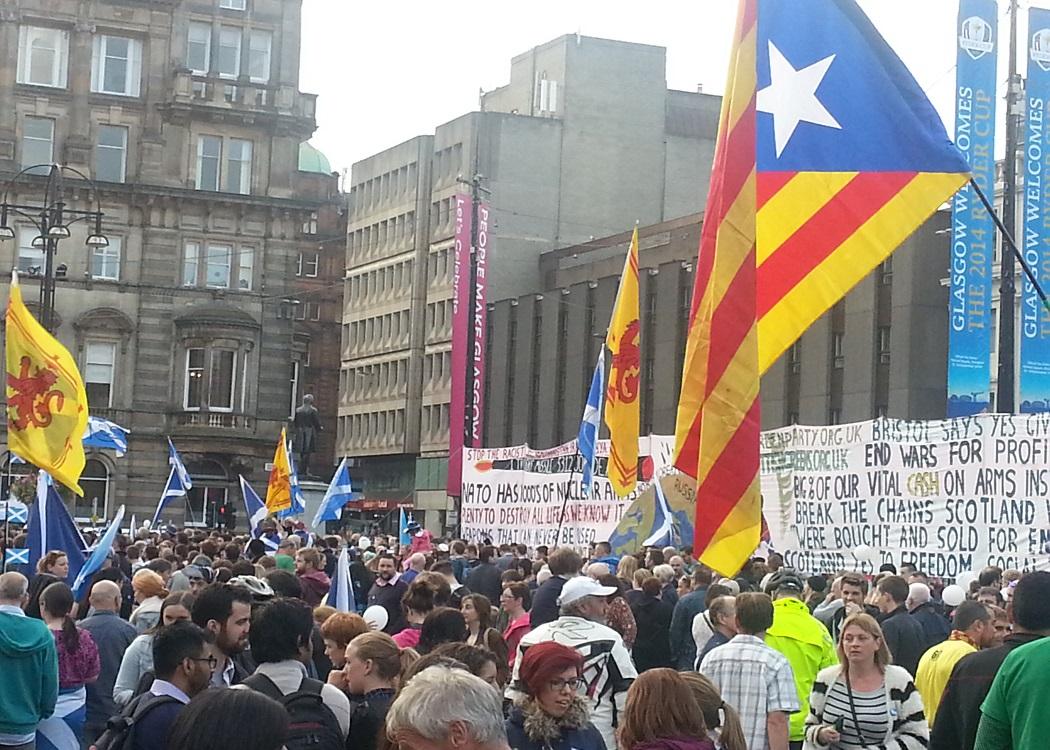 THE anniversary of indyref brought a flood of emotions back, some fond memories but also some welcome happenings.

Firstly. I was pleased to see the Green Party launch a crowdfunder to financially support a study by Professor Ronald MacDonald, research professor in macroeconomics and international finance at Glasgow University, into a stand-alone Scottish currency.

This is exactly the type of exercise that is required if we are to properly address the currency issue before the next independence referendum and it was pleasing to see that the spirit of supporting crowdfunding initiatives still has strength within the pro-independence community with the target met within just a few days of launch.

The official campaign disbanding so quickly after the referendum last year meant that the required retrospective analysis and reflection that was required didn’t take place.

Another welcome development was Colin Fox’s appeal for a new Yes Campaign. Not to call for another referendum, or to carry the same intensity, but to start preparations for the next referendum by establishing a Yes Convention to “discuss the lessons to be learned from our defeat last time and to prepare for victory next time”.

The official campaign disbanding so quickly after the referendum last year meant that the required retrospective analysis and reflection that was required didn’t take place.

I have previously written that I thought that time should be taken to reflect on both the strengths and the weaknesses of the Yes campaign before we start talking about indyref 2, so the fact that this is being discussed (and by others including Jim Sillars and Gordon Wilson) is to be welcomed.

But if this is to be an open, thorough and honest analysis it should include everything relating to the Yes campaign, and that includes everything from the White Paper and currency policy through to the campaign at a grassroots level.

Which brings me to my next issue: the weekend’s Hope over Fear rally in George Square. If we are to be brave enough to address everything from currency and macroeconomic policy to the leaflets and information produced then we have to address these types of events as well.

It strikes me that Hope Over Fear rallies are very much events where Yes voters are basically speaking to other Yes voters.

I’m not against marches and rallies per se. I attended two of the BBC bias protests at Pacific Quay and I also attended the march in Edinburgh the year before indyref.

My partner had said to me that she thought that particular march was a bit of a waste of time, however I wanted to attend, mainly to boost numbers because I thought that with a year to go we needed a show of strength to galvanise support.

It was interesting that despite it being part of the original plan to have three more marches, the organisers didn’t arrange anything for the following year. Although not privy to the decision making, the general consensus seemed to be that they didn’t want to take people away from more productive tasks like leafletting, street stalls and canvassing.

Did the organisers of Hope Over Fear have that as a consideration in the lead up to the actual vote? No idea, but if they did it didn’t stop them going ahead. To be fair, the rallies in the last week did seem to help the momentum and positivity in Glasgow, one of the few places that it has to be remembered, voted Yes.

It might seem like a bit of fun to hold up a banner saying “45% My Arse”, but what you are basically saying with that is: “Hey, we’re tin foil hat conspiracy theorists – vote for us.”

However, post indyref there are some points of criticism that I’d like to make. Firstly, it strikes me that these are very much events where Yes voters are basically speaking to other Yes voters. We lost the vote in 2014 and in order to win next time, we can’t just shout in an echo chamber and expect to increase the vote.

Secondly, some of those voices are just not credible. Anything that gives ‘the Scottish Resistance’ a platform to incoherently rant can do nothing but damage the independence cause. Promoting ‘grassroots voices’ is one thing, but to be brutally honest there are some people better left off the stage.

Thirdly, on the subject of credibility we have to remember that independence represents major constitutional change and that this means big questions in relation to substantive issues such as the economy, jobs, pensions and the future of our children and loved ones.

If we are going to self-reflect, be open, thorough and honest and plan for indyref 2 with a view to making sure that we win then this danger must be addressed.

Don’t be surprised if the uptake on that offer isn’t that strong. In the post-indyref environment that is one of the dangers of the Hope over Fear rallies – that they incubate and foster a type of outlook and attitude that will inevitably be self-defeating.

If we are going to self-reflect, be open, thorough and honest and plan for indyref 2 with a view to making sure that we win then this danger must be addressed.

If the organisers of Hope over Fear aren’t willing to face up to these issues, the accusation that it is nothing more than a front for Tommy Sheridan and Solidarity will basically have been proven.