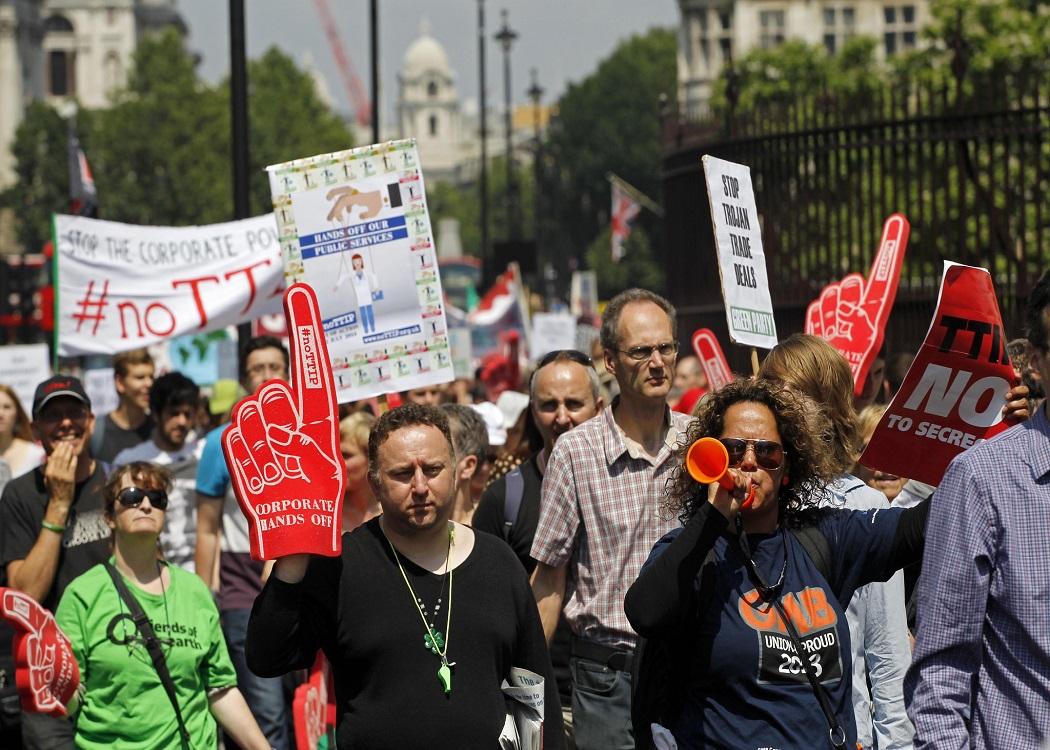 Gary Elliot, a Yes East Ayrshire campaign activist, warns that Scottish Water could be in jeopardy under the TTIP trade agreement, and says the Scottish Government must lobby to protect services

TWO issues have arisen within the past couple of weeks that prompted me to write this article.

The first was reports in both CommonSpace and The National in relation to reports that Anglian Water was in line to be successful in its bid for a water supply contract in Scotland to the tune of PS350m. Although I disagree with some of the analysis within the CommonSpace article – I have professional experience of public sector procurement and the rebuttal offered by Yes Giffnock is pretty spot on as far as I’m concerned – the report brings an issue to the fore that I, even as a politically active person, was unaware of.

The second was the leak to the BBC of a draft copy of the Trans-Atlantic Trade and Investment Partnership (TTIP) offer from the EU to the USA. There were several things about the draft treaty that, for me, stood out.

First was the sheer extent to which other EU countries had clearly been pro-active in seeking reservations within the draft treaty for their own nations. This compares with very few opt outs from the UK which – both going from this draft and also by comments made by both David Cameron and George Osborne – seems happy to have a minimal level of UK reservations and for TTIP to apply as broadly and unhindered as possible.

The UK seems happy to have a minimal level of UK reservations and for TTIP to apply as broadly and unhindered as possible.

Secondly, there were examples within the draft document of reservations targeted specifically at the “subnational” level within member states. For example, in Section A, Reservations, within the column titled “Limitations on national treatment” there is a clause stating:-

“In FI, (Finland) the right is reserved to impose restrictions on the right of establishment and the right to provide services by natural persons who do not enjoy regional citizenship in Aland, or by any legal person, without permission by the competent authorities of the Aland Islands.”

Scottish Government Ministers and SNP MSPs were recently pictured signing a petition for the NHS to be specifically excluded from TTIP. I have previously written that I believed that while both worthy and important, focussing on the NHS solely may leave other cherished public sector delivery models vulnerable to private sector involvement through TTIP.

Particularly in my thoughts when I wrote on the subject previously was Scottish Water and the fact that it is a public sector supplier. At that point, however, I was unaware that there was any water supply provision in Scotland that could be tendered for from the private sector.

Should we be happy to let this type of clause be our bulwark between TTIP-led privatisation and our public services continuing under that model?

My understanding of TTIP was that where a service existed as a public sector monopoly, this couldn’t be subject to private sector delivery through TTIP. During the referendum, the argument offered by the Yes campaign was that due to the fact that the UK would be treated as a member state, that scale of private sector involvement south of the border would possibly debunk any claim that a public sector monopoly existed (whereas in an Independent Scotland that claim would carry more legitimacy).

I argued previously as well, that if that was the case in relation to the health sector then water offered an even clearer example of a situation where within the UK there was a clear split between public sector delivery in Scotland and private sector delivery in the rest of the UK. Does the situation in relation to Anglian Water compromise Scotland’s position further?

The draft TTIP document (under limitations to market access) states:-

“Services considered as public utilities at a national or local level may be subject to public monopolies or to exclusive rights granted to private operators.”

And further clarification is given in the notes as follows:-

Exclusive rights on such services are often granted to private operators, for instance operators with concessions from public authorities, subject to specific service obligations. Given that public utilities often also exist at the sub-central level, detailed and exhaustive sector-specific listing is not practical.”

It could be argued that these limitations provide enough protection for both the NHS and our public sector water model. However, as far as I can see, “public utilities at a national or local level may be subject to public monopolies or to exclusive rights granted to private operators” could suggest that if neither a “public monopoly” or “exclusive rights granted to private operators” exist and that the model is a mix of both then the limitation would not apply.

Should we be happy to let this type of clause – which could be open to interpretation – be our bulwark between TTIP-led privatisation and our public services continuing under that model?

In my view, no, that would be dangerously complacent. To give stronger protection for our public services I would argue that the Scottish Government needs to lobby the UK Government on a far stronger basis in relation to TTIP.

We know that there are subnational member state reservations in place in the draft document so there is no reason why Scotland could not have its own reservations and limitations in the same manner as the Aland Islands.

The Scottish Government needs to lobby the UK Government on a far stronger basis in relation to TTIP.

The situation in relation to the NHS could and should be strengthened by including specific reservations to protect Scotland’s NHS from privatisation through TTIP.

Under limitations of national treatment, section 13 health services and social services, Germany reserves the right to “nationalise other key private funded hospitals”. A similar reservation for Scotland in relation to the water supply that is currently open to EU procurement would leave the door open for future renationalisation at an appropriate point in time.

Depending on the result on 7 May, the ability of the SNP to exert some leverage in this regard could be hugely enhanced.