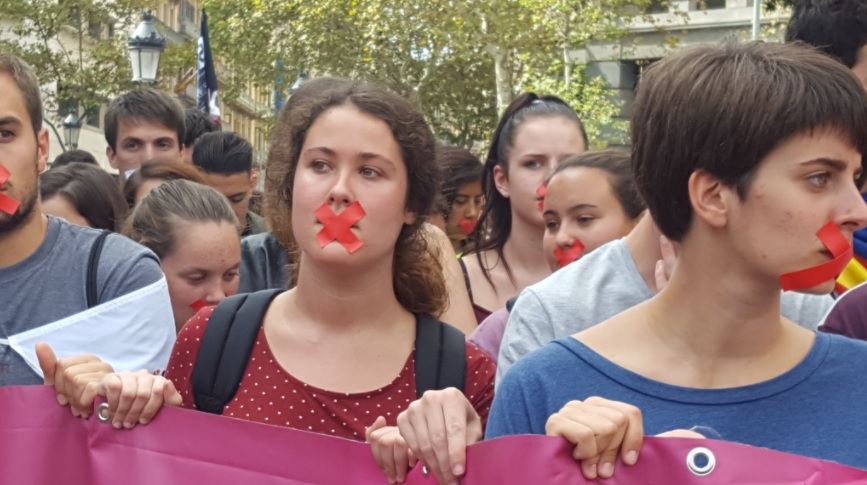 EUROPE’S failure on Catalonia is a PR disaster and a disregard of its own values that is already having consequences, and sadly the European movement appears oblivious to it. From a Barcelona polling station, I witnessed and shared in disbelief and anger at the poor response to disproportionate violence against unarmed citizens.

Despite cause for concern following unprecedented attacks on the autonomy of the Catalan institutions – with Spanish forces raiding Catalan Government buildings, detaining officials without due process, and seizing finances and ballots – the mood on the morning as I attended a polling station in the Sants neighbourhood of Barcelona was buoyant; a moment of community gathering, emotion, and democratic pride, soon to be hit by the reality of Spain’s violent response.

By noon, the smiles, cheering and music turned to gasps, tears and tension as voters exchanged videos and pictures of attacks across the country which seen Spanish paramilitary officers tearing through voting lines and ballot stations; smashing faces, beating firemen, throwing pensioners down stairs, firing weapons, and kicking and jumping on people’s heads.

It was one of the most appalling sights I have seen in a supposedly advanced European democracy. At the time, Europe’s silence was deafening, and yet what followed disgraced it further.

A glimmer of hope appeared with early statements by the Belgian prime minister and the Scottish first minister both condemning violence. However, a swooning statement from the British celebrating friendship and unity, in spite of the horrors being unleashed upon fellow European citizens, set the tone for Europe’s response.

At last, the EU’s executive body released a widely criticised statement which laid the blame solely at the Catalans’ door for fostering “division”, while merely referencing a couple of words to violence which it attributed to nobody.

The statement swiftly concluded with an endorsement of the Spanish prime minister to resolve a violent situation which he himself ordered. In the minds of many Europhiles it was a perfectly crafted statement that hit the middle ground, it didn’t seem to matter that the oppressive militaristic policing and attacks on European citizens were not unequivocally challenged.

Catalonia at its best, peaceful gathering with students playing tunes and waiting to vote. #CatalanReferendum pic.twitter.com/OWjVMlzAh7

With a good understanding of Europe’s operation, positives, and shortcoming, I am perhaps more sympathetic than most regarding the EU’s outcomes, which are often limited to take the correct action that many, myself included, desire and expect.

However, the unjustifiable response from the Commission fell way below the mark of what was possible and necessary. Citizens with European passports and Catalan ballots were allowed to face a virtually ignored barrage of violent and dispassionate policing from bussed-in paramilitary riot forces draped in Spanish flags, who were allowed to act in such an authoritative and nationalistic manner that it brought Catalan officers and firefighters to tears.

The legality of the referendum aside, Europe could have noted the same concerns of the UN and Amnesty International to police actions and suppression of civil participation and expression, and indeed the fact that it didn’t leaves me questioning why the EU apparently disagrees with the UN’s human rights body.

Police on their way to our happy & peaceful polling station. Mothers taking children home without being able to vote. #CatalanReferendum pic.twitter.com/ii2X14nHnN

The reality is that the EU has objectively decided to ignore the situation in Catalonia, not only because it doesn’t want to criticise the Spanish Government but also because Europe would rather this whole situation was not happening – wishful thinking is no excuse for a dereliction of duty to uphold core European civil rights.

Europe’s core values of democracy, human and civil rights, and social development are what have inspired faith and hopes for Europe in scores of people across the continent, but the EU’s response has sorely let down that trust, and the time to meet it is running out. Meanwhile, Europe’s human rights and democracy body, the Council of Europe, has also said nothing on the matter.

Sadly, I fear the misjudged handling of the Catalonia situation will only make it clear that the EU cannot be a reliable voice for human rights unless it fits its political agenda. This is not necessarily unusual in international relations but it should be for an institution which counts among its founding principles the protection and extension of human rights.

Powerful march! Citizens with crosses over their mouths, the only thing you can hear is the police helicopter. #CatalanReferendum pic.twitter.com/ENhowZcTgJ

Despite all the failings of the UN, its response did not tip-toe around the issue to appease power players; so too, Europe cannot afford to hide behind relationship management.

Were the actions in Catalonia to happen in a regime that the EU is critical of, we would already have EU leaders such as Guy Verhofstadt and Jean-Claude Juncker on a plane while the EU Commission sponsored Facebook profile picture frames demanding defence of the critical European values of assembly and speech free from violent repression.

Any yet any hope of a course correction by Brussels was dashed at a debate this week on the Catalan crisis in the European Parliament, as the EU continued to dig its hole deeper.

It was a debate that saw the majority People’s Party, including Spain’s governing party and holder of all the power positions in Brussels, attempt to restrict the terms of the debate to avoid discussing the violence that shocked the world.

Voters are emotional and proud that they've made it to the polling station. #catalanreferendum pic.twitter.com/pezXmbBbU2

Most jarring, however, was the statement from the Commission’s first vice-president, Frans Timmermans, which described the deployment of an army of weaponised paramilitary police against unarmed citizens as “proportionate force”.

While Europe appears oblivious to the widespread public concern and expectation, it is clear for many observers that Europe failed its citizens in Catalonia in favour of political expediency; in doing so it has provided a blank cheque for the Spanish Government and any others who may be inspired by this appalling behaviour.

This double standard weakens Europe and the credibility of its political institutions; unless it acts quickly, there will be no way for Europe to restore faith in the eyes of many now reconsidering their stances.