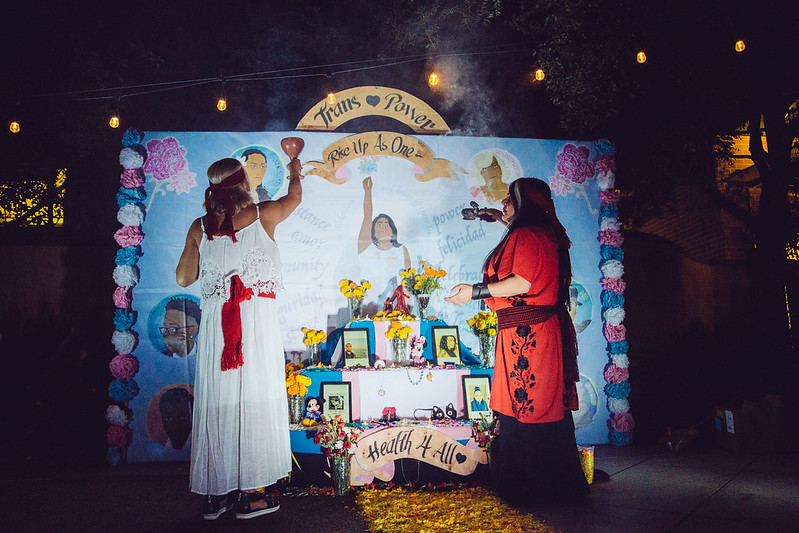 In her annual essay for Transgender Day of Remembrance, writer and poet Gayle Smith reflects on challenges trans people have faced and fought in different eras

ON THE Friday before Christmas 2008, I started living as the woman I had always known myself to be. There would be no turning back.

I had been closeted for far too long and I realised that it was time to put myself first and staying in a little blue box to suit the needs of others, most of whom probably didn’t even give me more than a passing thought was no longer an option.

Since making this very necessary decision, I have occasionally been asked by certain people if I wasn’t too old to transition. Well, I was in my 47th year when I finally took the step in the days when nobody had heard of Caitlin Jenner or Kelly Maloney, who are two fantastic role models for, shall we say, the more mature transwoman. However, I knew if hadn’t taken my leap of faith at that time I would done it then I never would have and I would have went to my grave with regrets that I hadn’t fulfilled my potential or made the best use of the life I was lucky enough to have been given.

READ MORE: Gayle Smith: Remember those in the trans community who, unlike me, never got to be who they really are

Having admitted that I transitioned later in life, I have no doubt some of you reading this will be asking: why did it take me so long? Well, let me put it this way: it wasn’t through choice. In fact, looking at it now, I can see there were definately generational factors at play and they were a lot more significant than I would have wanted them to be.

The Scotland I grew up in was a place where, like the rest of the UK, trans people were neither seen nor heard. To be honest, the vast majority of people didn’t know such a term even existed and often confused the idea being trans with drag or being gay. To many of my peers and those of an older generation, the thought that somebody could be born in the wrong body was an ailen concept, and even those whose liberal instincts wanted to them to get their heads round it struggled to actually do so.

Such was the atmosphere in my mid-to-late 70’s secondary school years that anyone who showed even the remotest signs of difference was ruthlessly mocked, made to feel that they didn’t fit in and were somehow abnormal, and if you confessed to having the feelings of wanting to be a different sex to the one you were assigned at birth, you would have been dismissed as just going through a phase, or be told to get over it and come in to the real world.

There was a real pressure to conform to the roles expected of you in those days, and those roles were reinforced not only by family, peers , and community but also by a press and media which very much mirrored the views of the time, and did nothing to rock the establishment view of how things should be. Change was not in their interests, unless it generated sensationalist headlines and created a moral panic at the breakfast tables of the nation.

This was extremely frustrating for a young trans teen who loved both her football and her make-up, and whose bedroom wall had pictures of both the Celtic team and Donny Osmond (though it has to be said that Donny took centre stage in my life.) Had I told anyone that this wasn’t a phase I would have been relentlessly and ruthlessly taunted. Trust me – 1970’s Britain was a place of deference, stereotypes, and very narrow minds and many people did all they could to make sure it stayed that way.

This view was very slow to change and persisted throughout the 1980’s and indeed into the 1990’s. In fact, it was only as recently as 1996 that the T was added to the LGB community, and slowly but steadily attitudes began to improve towards the transgender community. By this time I was in my mid-30s and a mature student at university and had finally admitted to myself that this hidden me was in fact who I really was and who I would always be, no matter how hard I tried to fight it.

Self-acceptance finally achieved, it was now time to start on the much longer journey of coming out to those who really mattered in my life. I knew that this was not going to be easy, especially for someone who was no longer in her teens or early twenties. Trust me – the earlier you can start your journey, the quicker it will be to complete it. That said however, everyone I know in the trans community has faced their own barriers and complications, as far too many of us have worried about how others see us. I was no exception to that rule.

Being born and brought up in a more conservative society than exists now undoubtedly made my coming out and my eventual transition a much longer process than I would have wanted it to be. I suspect it was the same for many trans people of a certain age. Fear of prejudice and mocking were the common tools used by the voice in my head, saying things like ‘don’t do it’ and ‘what will the neighbours say?’

READ MORE: Feminists warn of blurred lines ‘between free speech and hate speech’ on trans people ahead of parliament event

I think it is fair to say that those voices were all the louder because I faced the additional barrier of being a disabled person with both balance and visual impairments. Even in my twenties and thirties, my mother dismissed my identity as a passing phase; by the time I started transitioning, it had been a passing phase for almost 40 years. My mother – though one of the kindest people you could ever hope to meet – was always slow to accept change. I think in many ways, she was a product of her generation in the sense that she was very risk-averse, and the idea of me coming out to my dad filled her with fear.

The irony here is that when I did tell my dad, he was a lot more easy on me than she had been and admitted to me that he had always wanted a daughter. He did ask me one favour though, and I suspect many parents of transwoman my age may have asked the same, which was not to come out till the law was on my side. Reluctantly, and considering my additional barriers, I agreed his request and the result was that my dad never got to meet the daughter he knew he had.

Always a passionate supporter of fairness, my dad would be proud not only of his daughter, but of all my trans and non binary friends and would be the first to tell them how hard it was to win the rights we now enjoy and to fight with every legal means we have to protect them.

However, the first time he heard any of them moaning about how tough certain people are trying to make it for us, he would gently caution them by paraphrasing the title of a poem by Erin Boyle about his beloved Celtic. He would do this by giving them a gentle but firm reminder that despite all the difficulties and challenges we face in relation to the necessary reform of the Gender Recognition Act we should take a moment to reflect on past generations who never had the legal protections we currently enjoy.

As we do so, on this Remembrance Day, we need to celebrate how far we’ve come and appreciate that, in spite of the battles we’ve yet to win. We don’t know how lucky we’ve got it.